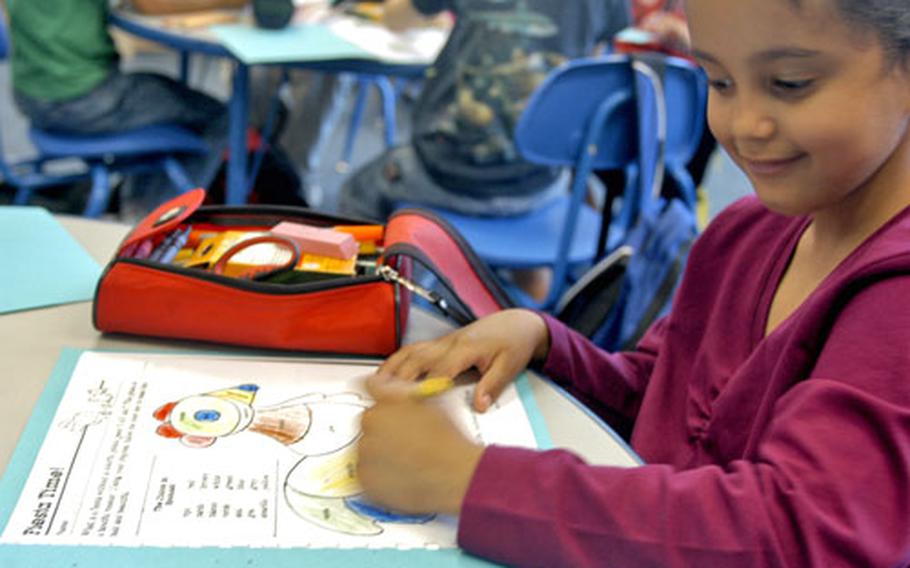 STUTTGART, Germany &#8212; The Spanish is starting to sink in.

It&#8217;s a start. For Sarah and the other second-graders at Robinson Elementary/Middle School, Spanish has become a way of life, at least for this month &#8212; Hispanic Heritage Month.

Their teacher, Sonya Ladner, said her 7- and 8-year-olds are soaking up the lessons.

Every morning the children greet their teacher, &#8220;Buenos dias, Se&#241;ora Ladner.&#8221; They talk in Spanish as best they can. And they learn about famous Hispanic people such as labor leader Cesar Chavez, singer Gloria Estefan and baseball player Roberto Clemente.

On Sept. 29, the school is going to celebrate the month with a big fiesta.

&#8220;I want them to have a better understanding of the Hispanic culture and Hispanic heritage,&#8221; Ladner said. &#8220;And to understand that is what diversity is, and that everyone is special. That is my goal.&#8221;

About 240 pupils gathered in the school cafeteria to watch a performance by Grammy-nominated Tejano singer Elida Reyna. But she and her entourage, which was traveling from Schweinfurt and stuck in traffic, arrived two hours late, after school was dismissed.

After a performance Friday night at Patch Barracks, Reyna was scheduled to perform in Garmisch on Saturday, Vilseck on Monday and Hohenfels on Tuesday. Since there was no concert, the kids left the cafeteria and returned to their classrooms.

Ladner&#8217;s pupils opened up their Hispanic Heritage Month coloring books and started coloring. Three of the 19 children in the class are Hispanic, Ladner said.