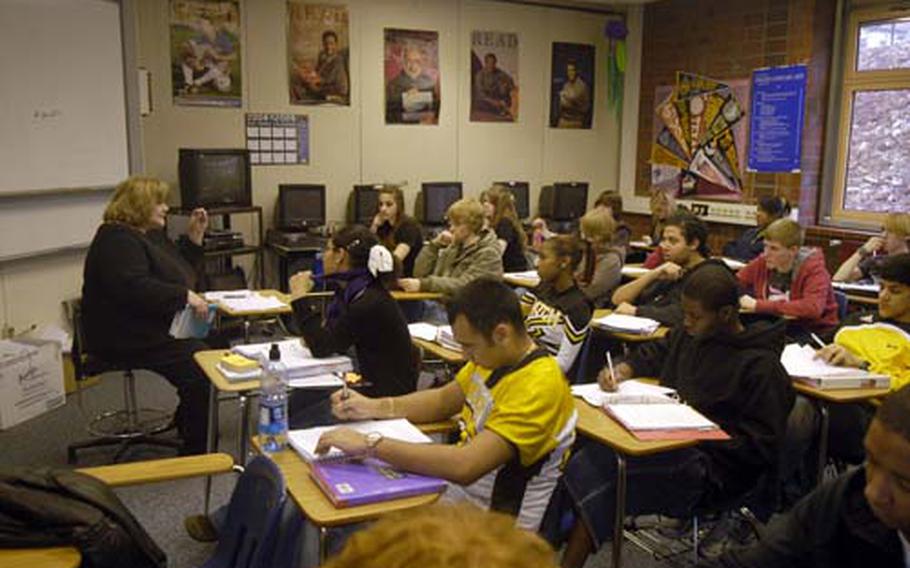 Riki Johnston, a language arts instructor, teaches to a classroom full of students at Patch High School, where insufficient space is increasingly becoming a problem. Three teachers are without classrooms of their own and 17 other teachers share rooms. (John Vandiver / S&S)

STUTTGART, Germany &#8212; In a perfect world, the infrastructure is already in place before the people come.

But in Stuttgart, where the population has swelled in the past year from 17,000 to 21,000, that hasn&#8217;t been the case as more and more students cram into increasingly cramped classrooms.

Now, with another influx of students expected at Patch High School next year, educators and garrison officials are looking for ways to make room.

On Wednesday evening, parents at Patch Elementary School heard from school and garrison leaders about a range of options to deal with an anticipated jump in enrollment next school year, which could send Patch fifth-graders 10 miles up the road to Robinson Elementary Middle School.

While a $47.5 million high school and elementary school construction project, slated for 2013-14, will solve the crunch eventually, the next few years will pose challenges, he said.

Indeed, if April pre-registration numbers indicate a big increase at the high school, something will need to be done, said Frank Roehl, superintendent of the Heidelberg School District.

At the Wednesday meeting, parents were resistant to one possible solution that involves sending about 120 fifth-graders to Robinson next year. The move would free up four classrooms, which in turn could be used by the overcrowded high school next door.

But for some pupils, the move would mean longer bus rides, parents argued. Others didn&#8217;t like the idea of their kids boarding buses and attending school with older middle schoolers at Robinson.

Some felt like it was already a done deal, and lashed out from the audience.

Roehl, however, insisted no final order has been issued.

"We&#8217;re still in the formative stages. No decision has been made," Roehl stressed repeatedly during the meeting.

But with about 230 U.S. Africa Command personnel still slated to arrive in Stuttgart this year, some additional impact on the schools is inevitable. While precise figures aren&#8217;t known, the early indications are that the high school will absorb the brunt of the boost. At Patch High School, things are already tight. Three teachers rove from room to room because they don&#8217;t have their own classrooms. Seventeen other teachers share rooms, according to school officials. And the high school might need to hire four more teachers to meet the demands of a higher enrollment.

But Pastore said that he and district officials continue to look for alternatives.

"The last thing in the world I want to do is move [the fifth-graders]. This is absolutely the last recourse," Pastore said.

Other solutions being considered include installing portable classrooms at the high school. However, with space available at Robinson, it could be difficult to justify or win funding for the trailer-style classrooms, Roehl said.

Others ideas involve holding more classes at the high school cafeteria. Pastore also said they&#8217;re trying to find space on Patch Barracks near the school that could possibly function as classrooms.

In the meantime, officials await pre-registration in April to get a better scope of the challenge ahead. Roehl added that it&#8217;s still possible that no changes will be required. But if something has to be done, there will inevitably be some upset parents, he said.

"Whatever decision will be made will impact some part of the population," Roehl said. "There will be a subgroup that will be unhappy. Change will be difficult."