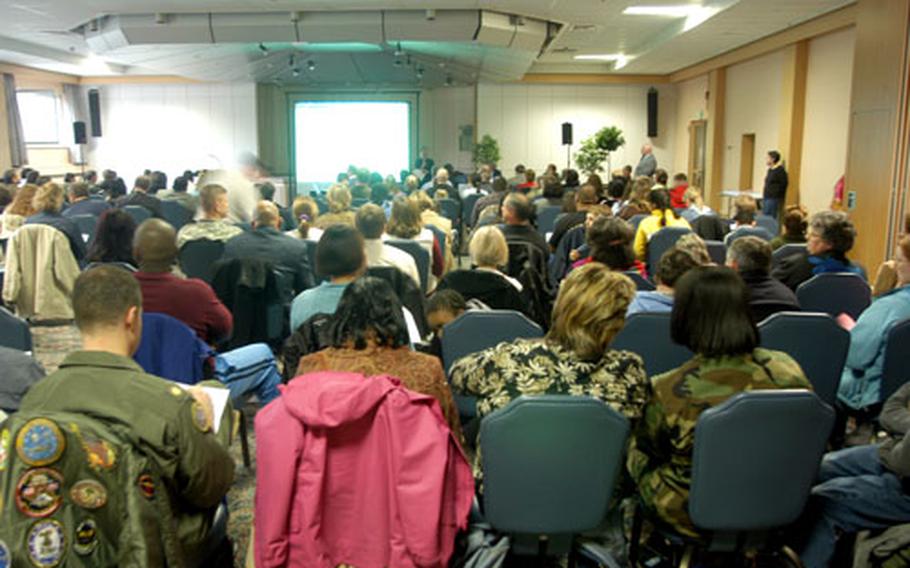 About 300 parents and teachers attended a meeting Tuesday at Patch Barracks to ask questions and air concerns about the realignment of Stuttgart middle schools, which is to take place next school year. (Charlie Coon / S&S)

The plan calls for Department of Defense Dependents Schools pupils, depending on where they live, to attend one of two modified elementary/middle schools on opposite sides of the city. Currently, seventh- and eighth-graders attend Patch High School.

For months, parents have complained that the plan would require some pupils who currently walk to school or have a short commute to be bused up to one hour in each direction. Others have said the new setup would rob middle school pupils of access to advanced classes and extra activities offered at the high school.

But after Tuesday night&#8217;s meeting, when 300 people packed into the Patch Community Club, many seemed satisfied that DODDS administrators, who answered more than 70 questions, were earnestly addressing their concerns.

&#8220;We know there&#8217;s been a lot of angst,&#8221; said Jackie Nasca, president of the Patch Elementary School PTA. &#8220;We know the administration has been trying to address that angst but still toe the line, still do what you have to do to meet the educational needs of the students.&#8221;

The change was made, according to DODDS, because too many middle school pupils were getting D&#8217;s and F&#8217;s on their report cards, and because some 11- to 14-year-olds suffered by being grouped with the older high school crowd.

Riley said research showed that middle school pupils perform better academically in a system where students and teachers can collaborate more closely among themselves.

Marie Barnes, parent of a soon-to-be seventh-grader, said it might take six months for the new schools to get into a normal flow, &#8220;but I think parents will be very pleased with the outcome.&#8221;

Under the plan, about two-thirds of Stuttgart&#8217;s middle school pupils will attend school at Robinson Barracks on the city&#8217;s north side, even though many of them live closer to Panzer Casern in the southern suburb of B&#246;blingen, where the other middle school will be located.

Dr. (Lt. Col.) Peter Benson of Special Operations Command Europe said he picked a home based on the location of schools and other factors. Under the plan, Benson&#8217;s 11- and 13-year-old children, instead of having their current quick commute, will sit on a school bus for two hours a day.

Riley said some B&#246;blingen-area parents would be able to apply for an exception that, space permitting, would allow their children to attend the closer school.

For more information on changes at the middle schools, see the Web site www.bav-dso.eu.dodea.edu. Click on &#8220;Schools&#8221; on the index at left, and then the link for Stuttgart middle schools.