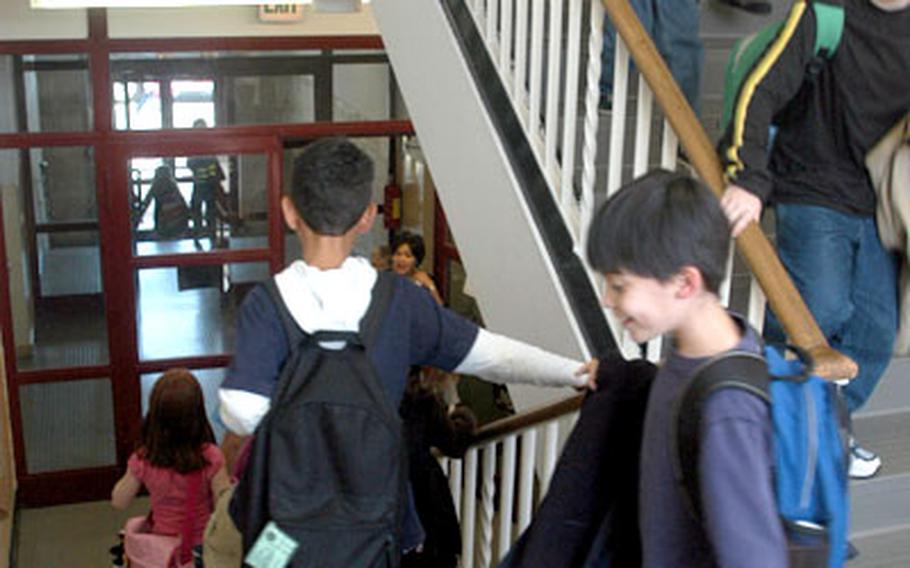 Students go down one of two stairwells at the four-story, 525-student Boeblingen Elementary-Middle School. The school was cited for nine safety violations in a September inspection, and some parents are urging that safety improvements be made. (Charlie Coon / S&S)

BOEBLINGEN, Germany &#8212; A recent inspection found that the Boeblingen Elementary-Middle School has nine fire safety violations &#8212; including eight left over from an inspection last year &#8212; and some Stuttgart parents are wondering what&#8217;s being done to fix the problems.

Among the violations: kindergarten, first- and second-grade students who attend classes and library on the fourth floor would have to hustle down 66 steps to the ground floor to escape the building.

Parents are wondering why the violations cited in November of 2005 haven&#8217;t been fixed.

Like many buildings in the Stuttgart garrison, the school building was built for the German military in the 1930s. Until this year, the school was used only by elementary school students. But Stuttgart recently moved its middle-school students from the high school to two middle schools, and one of the schools, Boeblingen, saw its enrollment increase from about 400 students to 525 in one year.

In addition, ongoing renovations to military housing in parts of the community have caused incoming families to be funneled into the Boeblingen area, instead of toward Robinson Elementary-Middle School where there is ample classroom space.

According to an Army Garrison Stuttgart fire safety inspection report, other violations include no sprinkler system, no fire-resistant doors, and no fire-separation measures between the basement and school.

Some parents have also complained that the four-story building has just two stairwells to use in an escape, and that one potential exit, through the gymnasium, would have to be made through doors that open inward.

Another parent, Jaqui Preston, wondered if safety standards were different in Germany than in the U.S.

Several parents pointed to new buildings and renovations being done throughout the Stuttgart garrison, and wondered why more money couldn&#8217;t be spent on the school.

Debbie Strong, the school&#8217;s vice principal, said the school is doing what it can to help. It has changed fire-drills to make them more lifelike, such as by blocking an exit, and placed fire extinguishers in the science lab.

Strong said that suggestions such as adding fire escapes are being considered, and that further discussions to address concerns are planned with the school&#8217;s student advisory committee and PTA.