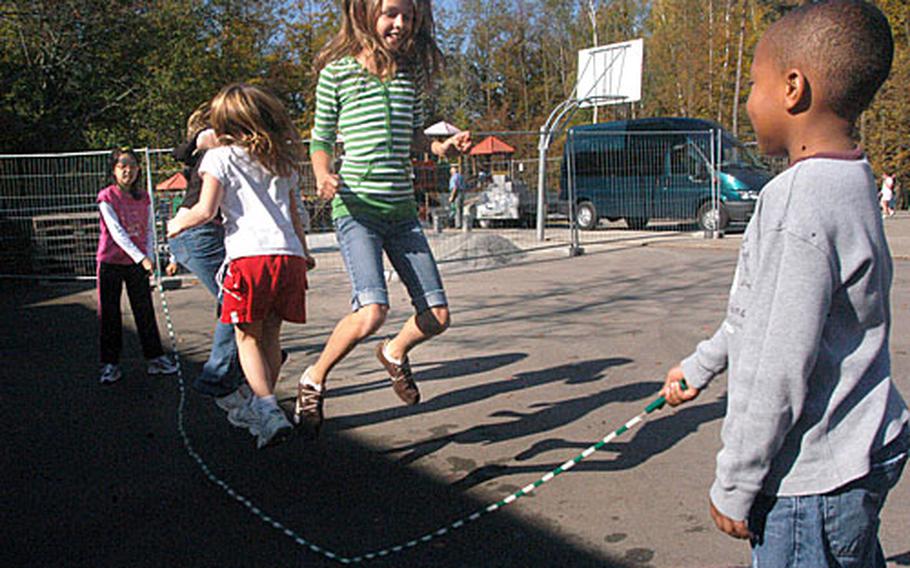 Fifth-grader Bryn Popovich, center, and schoolmates skip rope on the playground at Patch Elementary School in Stuttgart, Germany. One option for expanding the school calls for building more classrooms on the playground. (Charlie Coon / S&S)

STUTTGART, Germany &#8212; Garrison and school leaders in Stuttgart are looking at ways to build more classrooms to lessen the crowding caused in part by the new U.S. Africa Command.

Expansion at Patch Elementary School at Patch Barracks, which in 13 months grew from 476 students to around 600, is under particular scrutiny.

One plan presented last week that caused furrowed brows from the school principal and others called for building four classrooms on a large portion of the playground.

Another proposal would expand Boeblingen Elementary-Middle School at nearby Panzer Casern. At the start of last school year, some students there didn&#8217;t have desks.

The Army Garrison Stuttgart commander, Col. Richard M. Pastore Jr., is expected to review the options after he returns next week from a lengthy out-of-town assignment.

The garrison is using $2.25 million in funds received from AFRICOM for the classrooms, which ideally would be ready for the 2008-2009 school year.

Stuttgart has wrestled with space problems for several years at Patch Barracks and Panzer Casern, where most of the military community&#8217;s offices, stores, residences and schools are located.

Families transferring into the community have gravitated to housing in that area, southwest of downtown Stuttgart. The schools there, which are old and have minimal room to expand, have filled up.

Meanwhile, the Africa Command, created to coordinate the military&#8217;s efforts on that continent, has begun building up at Kelley Barracks, southeast of downtown. About 800 employees &#8212; many bringing their families &#8212; are expected to join the command in the next year.

On the opposite side of the traffic-snarled city of 600,000, to the north of downtown, Robinson Elementary-Middle School on spacious Robinson Barracks is under-populated. Swaths of on-base military housing sit empty.

Many people do not want to live on the north side of the city because it is too far from work or the off-base housing is too expensive.

The garrison&#8217;s and schools&#8217; military clientele &#8212; mostly an upscale mix of officers, Defense Department civilians and contractors &#8212; have been vocal in criticizing the handling of issues such as redistricting.

At an August town-hall meeting, attendees shouted down a plan that would have bused some kindergartners and elementary students an hour or more to Robinson Barracks.

Last week, Patch Elementary&#8217;s advisory council of parents, teachers and administrators panned the plan to build classrooms on the playground.

Playtime, said Robert Allen, the principal, is a vital part of the students&#8217; days.

On the other hand, engineers are grappling with limitations on money and land.

&#8220;We&#8217;ll always be faced with the same kind of challenges because we have a lot of children in the community,&#8221; said Reilly, the garrison spokesman.