April Konter used an Automated External Defibrillator to help save a man who had suffered a heart attack in a Stuttgart fitness center. (Charlie Coon / S&S)

April Konter used an Automated External Defibrillator to help save a man who had suffered a heart attack in a Stuttgart fitness center. (Charlie Coon / S&S) 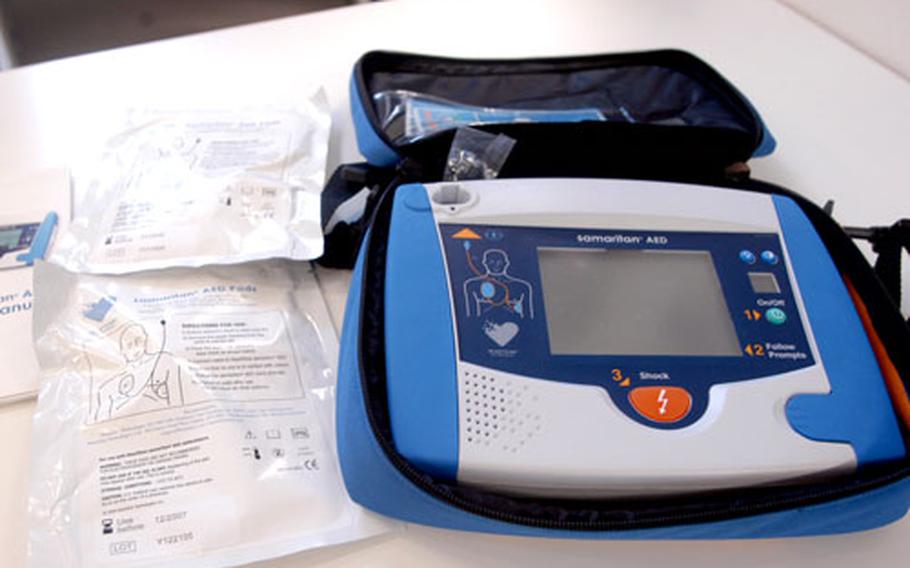 The Automated External Defibrillator uses a voice recording to walk a user through the process. (Charlie Coon / S&S)

STUTTGART, Germany &#8212; April Konter veered from her normal routine on Aug. 8 by working out at the Robinson Barracks fitness center instead of the one across town.

That choice may have saved Uwe Buehler&#8217;s life.

Buehler, 50, suffered a heart attack while running on one of the center&#8217;s treadmills. He was saved by Konter and the gym&#8217;s Automated External Defibrillator, a lunchbox-sized machine that diagnosed Buehler and shocked his heart back to life.

Konter, 27, teamed up during the rescue with Angela Stubbs, a visiting college student from California, to perform cardio-pulmonary resuscitation.

Konter, the wife of Staff Sgt. John Konter of the 554th Military Police Company, said she was exercising in the small Robinson gym and facing a mirrored wall.

In the reflection, she could see Buehler running on a treadmill.

While Konter and Stubbs performed CPR on Buehler, a gym employee brought over the AED.

Konter attached the two pads to the man&#8217;s chest, which diagnosed his heart rhythm and advised that his heart be electrically shocked. An ambulance arrived about 15 minutes later.

Buehler, the husband of a University of Maryland University College employee, has since fully recovered.

The machine uses a voice recording to walk a user through the process.

Konter is a believer in AEDs as well as people being trained in CPR.

Lory Benson, an employee at the Mueller Fitness Center in Garmisch, used an AED to help Sgt. Major (Ret.) James Kittrell, who was stricken in the gym&#8217;s locker room, on March 20.

Like Buehler, Kittrell had no pulse and was not breathing when Benson arrived on the scene. But after she fastened the AED&#8217;s patches to Kittrell&#8217;s chest, the machine diagnosed Kittrell&#8217;s heart problem and instructed Benson to apply an electrical shock to his heart, which she did.

By the time the German paramedics arrived, Kittrell&#8217;s heart was beating and he was breathing on his own.

Past 40? A few fitness tips to help lessen chances of suffering a heart attack during exercise:

&#182; Visit a doctor or qualified health professional for a health screening.

&#182; Know your blood pressure. The &#8220;silent killer&#8221; can have no symptoms and cause a heart attack out of the blue. High blood pressure can be lowered through diet and exercise and, if necessary, medication.

&#182; Know your cholesterol. High levels of low-density lipoprote (LDL) cholesterol can damage artery walls and cause arteries to harden and narrow. Even health-conscious people can have high LDL. Diet, exercise and, if necessary, medication can help.

&#182; Start slowly and build up. Walking is a good exercise for beginners.

&#182; Be consistent. Perform aerobic exercise three or more times per week for 30 minutes or more. Aerobic exercise is anything that raises the heartbeat above resting level. Move every day, even if it means just going for a walk.

&#182; Know your family history. High cholesterol, blood pressure, diabetes, and heart problems can all be inherited.