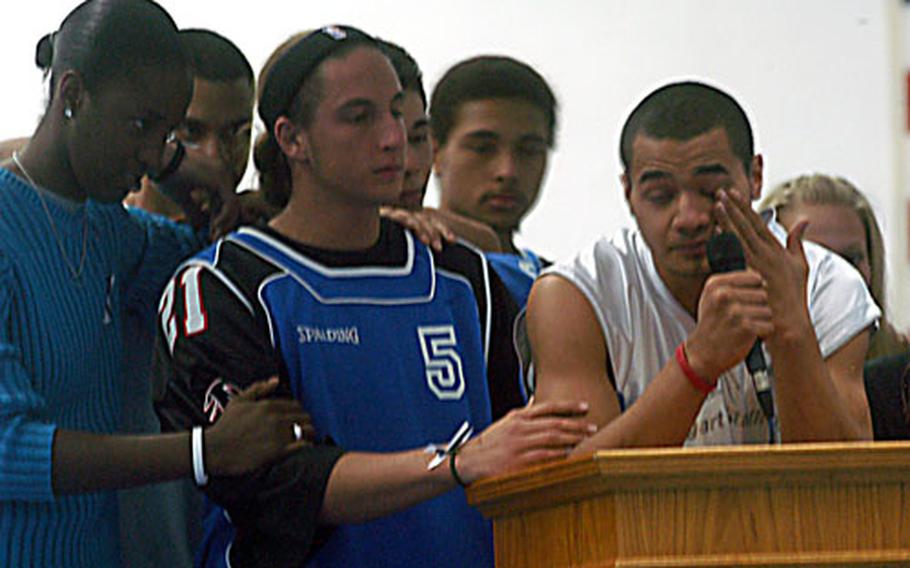 Josh Liliu, right, wipes away tears as he speaks Friday during a memorial service for Bryan Anthony Burnette, 18, at the Patch Fitness Center in Stuttgart, Germany. Burnette, 18, died Oct. 30, 14 days after he went into a coma after suffering an asthma attack. From left are friends Jamila Farah, Daniel Liliu, Paul Schwarzenberger, Stephen Perges and Jasmine Arbinger. (Charlie Coon / S&S)

STUTTGART, Germany &#8212; On the gym floor, 11 basketballs were in a rack that held 12. Nearby was a podium, a framed jersey and a framed picture. The bleachers were almost full, as were the chairs on the floor.

Bryan Anthony Burnette&#8217;s memorial service was held Friday night in a gym like the one in which on Oct. 16 he suffered what proved to be a fatal asthma attack. He died two weeks later. He was 18.

About 300 mourners and well-wishers, many of them teenagers, were at the Patch Fitness Center for the service. Burnette, a 6-foot-3 forward for B.C. Vaihingen Enz, a local semi-pro basketball team, was stricken breathless just before a game, said his father, Timothy T. Burnette Sr., a military retiree. The teen lapsed into a coma because oxygen could not reach his brain.

Many of Bryan&#8217;s friends cried during the ceremony.

The service was billed as a celebration of life. April Adkins sang. Elder Jonathan Griffin gave a fiery sermon and exhorted, &#8220;Can I have a witness?&#8221; Burnette&#8217;s young friends, some with hollow looks in their eyes and tears running down their cheeks, tried to be enthusiastic.

A doctor took the podium and explained about asthma, a breathing disorder in which the lungs&#8217; airways become narrow when irritated by allergy, exercise or other irritants. Don&#8217;t make fun of a kid who uses an inhaler, the doctor told the crowd.

A few students from the Patch High School audio-video class put together a DVD with music, video and snapshots that played on the wall of the darkened gym.

Some friends took turns at the podium, sharing their remembrances. They then presented the framed portrait, jersey and flowers to Burnette&#8217;s father, his mother, Theresa, who works for the Army and Air Force Exchange Service, and his brother.

A glass backboard and basket was mechanically lowered from the ceiling. One of the friends stepped up to the free-throw line and a referee, in black pants and black-and-white striped shirt, blew a whistle and bounce-passed him the ball. The friend dribbled a few times and took aim at the basket. The gym went silent.

But the friend didn&#8217;t shoot. Instead, he turned and carried the basketball to the rack, placing it in the empty space. And a final buzzer sounded.