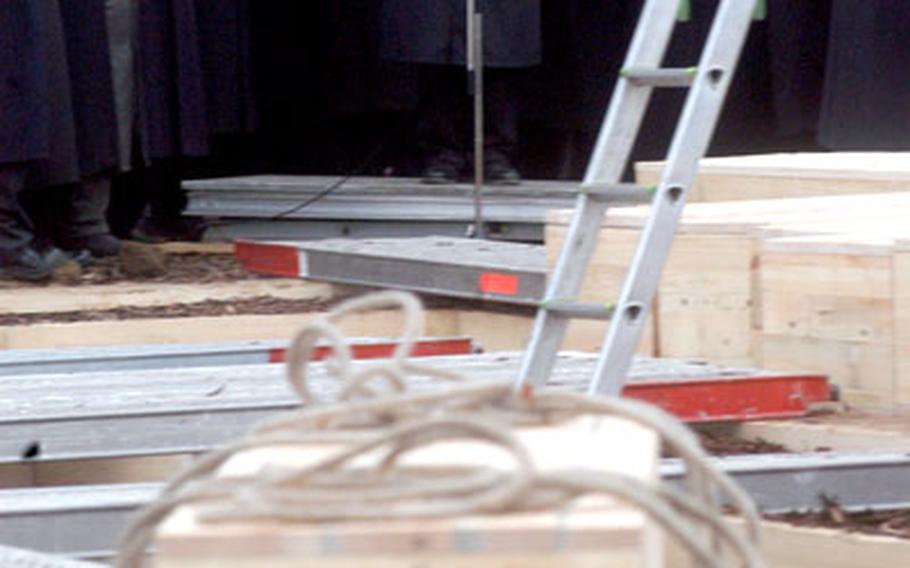 Rabbi Netanel Wurmser of the Stuttgart, Germany, New Synagogue speaks at the Dec. 2005 funeral of 34 Holocaust victims whose remains were discovered in September 2005 at Stuttgart Army Airfield. Jewish community leaders have announced that a memorial will be unveiled in April to honor the victims. (Charlie Coon / S&S file photo)

STUTTGART, Germany &#8212; A memorial will be unveiled in April to honor 34 Holocaust victims found at Stuttgart Army Airfield last year.

While the remains of the victims were found just inside the gate to the base, the memorial itself will be right outside the fence, said Lars Neuberger, an official with the German state of Baden-W&#252;rtemberg.

However, gravestones inside the base will mark where the victims rest, Neuberger said.

The remains were discovered in September 2005 by contractors who were doing excavation work just inside the airfield&#8217;s main gate, and the bodies were given a formal service in December.

More details for the April memorial will be worked out next month for the planned April 15 ceremony, said Arno Fern, an official with the Jewish community in Stuttgart. Jewish law requires a one-year wait between burial and placing a marker or memorial at the grave, Fern said.

Upon discovery last year, German prosecutors wanted to exhume the remains for evidence, but Jewish leaders in the area protested, saying that the law of their faith required the bodies to remain as undisturbed as possible.

Buried in simple pine boxes, the remains that had been moved were painstakingly put back as precisely as possible to where they were found.

The airfield is adjacent to Stuttgart International Airport, just south of the city. It is used by the military for transporting troops, cargo and VIPs.

While the U.S. military has largely stayed out of the affair, U.S. Army Garrison Stuttgart commander Col. Kenneth Juergens said in a statement this week that the military has no problem with the memorial site outside the fence as long as there is no impact on the security, operations or traffic access at the airfield.

&#8220;The U.S. forces recognize the local community&#8217;s desire to erect a dignified memorial site that will honor the victims,&#8221; he said in the statement.