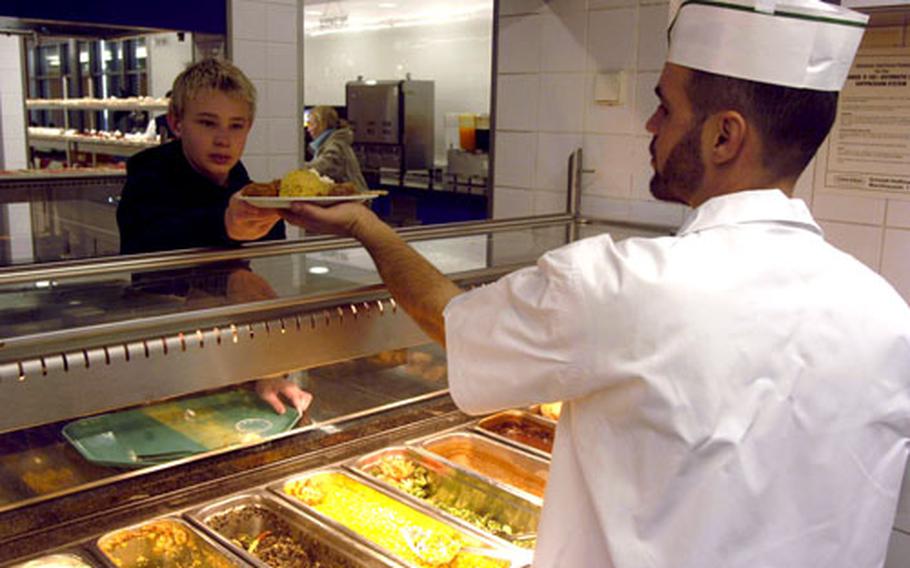 STUTTGART, Germany - What would you do for Christmas if the chow hall wasn&#8217;t open?

For those with nowhere else to go, the Black Stallion Inn was open on Tuesday, serving up a small feast at Patch Barracks. About 90 customers came to eat, compared with the normal lunch crowd of 400.

The kitchen crew said they were pleased to come in to work, for the diners as well as for each other.

The chow hall was properly festooned with sparkly bulbs and garlands and Christmas-themed placemats.

Roast beef, shrimp and rainbow trout were among the entrees. The price: $6.05.

Jordan, who like many of the kitchen crew is ex-military, greeted diners with a friendly smile. He was motivated by the spirit of the day.

Carter, a 19-year-old from Lee County, Fla., said she had never seen snow before and had hoped for her first white Christmas. Maybe next year; Stuttgart offered only frost on this day.

Sgt. Wandell Gordon&#8217;s wife was back in the U.S., but he took his loneliness with perspective.

&#8220;It would be kind of selfish to complain when soldiers in Iraq are without their wives and kids,&#8221; Gordon said.

The deputy commander of U.S. European Command, Vice Adm. Richard K. Gallagher, was behind the counter loading up plates.

&#8220;He called over a couple weeks ago and asked if we needed some help,&#8221; said Alfonso Moore, the dining facility manager. &#8220;Personally, I think when soldiers see such a high-ranking person serving food on Christmas or Thanksgiving, that&#8217;s good stuff.&#8221;

Young soldiers weren&#8217;t the only ones taking advantage of the chow hall.

Greg Rawson and his four children came from Memphis, Tenn., to visit his wife and their mom, Cmdr. Lisa Rawson, who was pulling a six-month tour. Greg Rawson said the fancy spread reminded him of being at home.

It appeared, though, that they didn&#8217;t miss the shopping, cooking and cleaning.