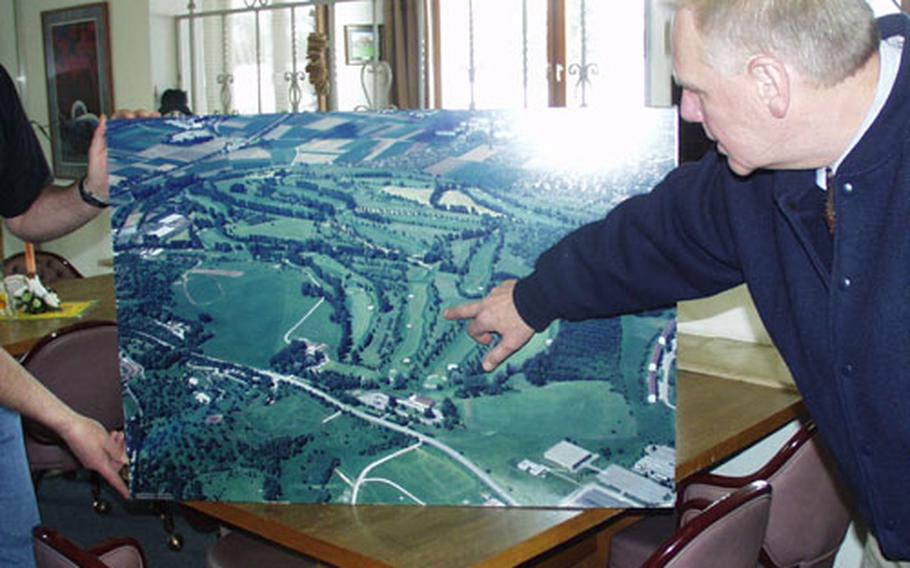 Dennis Maruska, director of community activities of the 6th Area Support Group, points to one of the greens on an old picture of the Stuttgart Golf Course. (David Josar / S&S)

Dennis Maruska, director of community activities of the 6th Area Support Group, points to one of the greens on an old picture of the Stuttgart Golf Course. (David Josar / S&S) 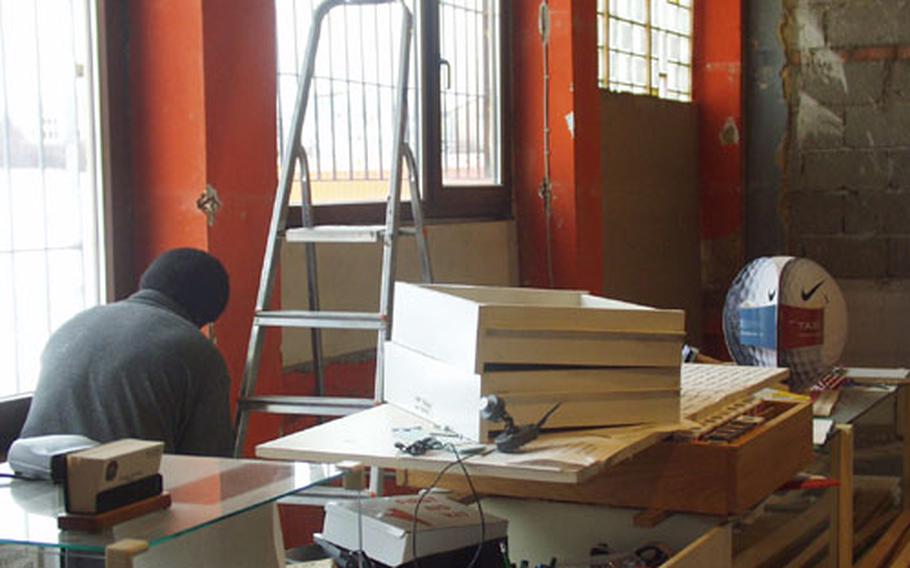 Work crews on Thursday prepare the pro shop at the Stuttgart Golf Course for renovations. The golf course is undergoing more than $900,000 in construction this year to improve the facilities and add an improved water irrigation system. (David Josar / S&S)

KORNWESTHEIM, Germany &#8212; The Stuttgart Golf Course is undergoing roughly $900,000 in renovations to add sprinklers to the greens, enlarge the pro shop and renovate the club house.

Two weeks ago, work crews began ripping up the interior of the store that sells golf equipment and installing irrigation lines that will allow the course to be watered, said Dennis Maruska, director of community activities for the 6th Area Support Group.

The golf shop will almost double in size, Maruska said, going from about 430 square feet to just more than 800.

A total of $250,000 is being spent on club house renovations &#8212; which include new floors and fresh paint &#8212; and on the pro shop. A temporary pro shop is operating out of portable trailers.

The need is great for the irrigation system, which had been planned for about a decade, said Ron Wilson, assistant golf course manager. Last summer&#8217;s heat turned much of the grass on the 18-hole golf course brown, he said.

The new system will fully water the course automatically, and it will replace an outdated, underpowered system that could water only a few holes at a time, Wilson said. During the worst of last summer&#8217;s heat, course employees spent several nights working all night so they could move the more limited sprinkler system from one hole to another.

The golf course, which opened in the 1950s, is a German-American partnership. Last year, it hosted about 41,500 rounds of golf, with nearly 57 percent played by German golfers. The rest were by U.S. military personnel and Department of Defense identification card holders and guests.

For Germans to play at the course, they must be members of the Golf Club Neckartal, whose home is at the Stuttgart Golf Course, or another club.

Because of the unique agreement, German golfers have a separate pro shop &#8212; one reason being that the goods in the American shop are exempt from German taxes. Also the German contractor who runs the restaurant buys all his food from the local economy and not the commissary, Maruska said.

The facility is about a 10-minute drive from downtown Stuttgart and can be reached by following the signs along the highway to Kornwestheim and then to &#8220;Pattonville.&#8221;

Pattonville is a former U.S. military housing area that was returned to the German government about a decade ago. The golf course is adjacent to where Pattonville had been.

The course, Wilson and Maruska said, is economical for American golfers. The greens fees are based on a sliding scale, so an E-1 will pay as low as $12 for a round of golf while an officer could pay more than $20.

Those prices, even the upper-level prices, are below what a local national would pay to use the course, they said.

In addition to the golf course, the facility has a driving range and two putting greens.