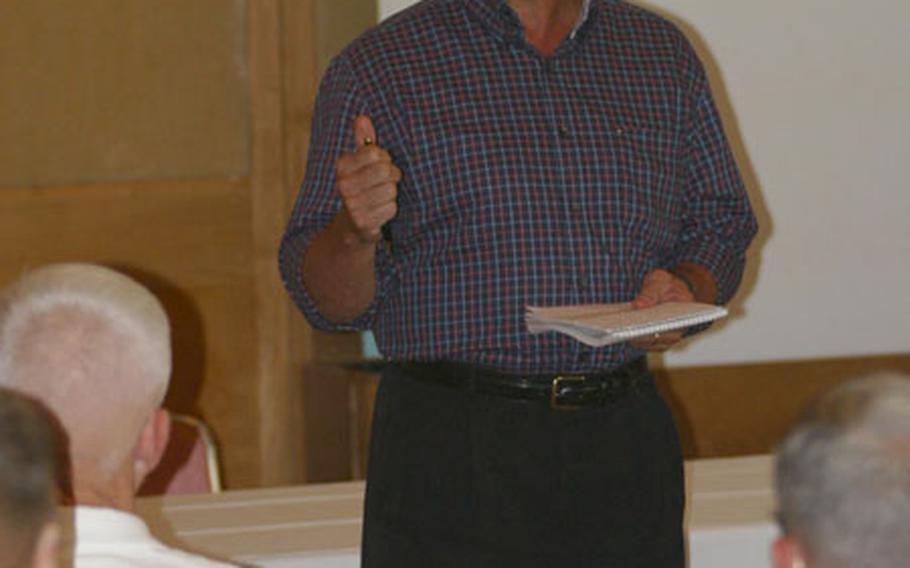 The 1,200 who are part of U.S. Marine Corps Forces Europe, or MARFOREUR, are spread out across a lot of countries. On Wednesday and Thursday, some came to the European Theater Marine Conference to hear the latest news affecting Marines, as well as information on the Corps&#8217; direction for 2005 and beyond.

&#8220;In the Spanish culture, business is done at a personal level. If I can know the needs of MARFOREUR and [U.S. European Command] and can translate that to them, that makes my job a lot easier.&#8221;

The 90 Marines who came to the conference were mostly colonels, lieutenant colonels and majors. Many were from Stuttgart, where MARFOREUR is headquartered, but others came from places such as Latvia, Norway, Russia and Italy.

Their job, according to MARFOREUR commander Lt. Gen. Martin R. Berndt, was to leave the conference feeling more connected to the Corps.

&#8220;In many cases, Marines &#8230; are working in an office with other service and state department people and they&#8217;re focused on their day-to-day tasks,&#8221; Berndt said. &#8220;Because they don&#8217;t have a day-to-day exchange with Marine operating forces or, in some cases, other Marines, the things going on within the Corps don&#8217;t get front-and-center attention.

Some of the changes are tactical, such as EUCOM&#8217;s shifting focus from western Europe to eastern Europe and Africa, which are considered the new potential hotspots for enemies of the United States.

Other changes are not as exciting but just as important, Berndt said, such as new procedures and paperwork. The officers in attendance were ordered to learn the rules and pass them down their chain of command.

Maj. Michelle Rudy, of Mullica Hill, N.J., and MARFOREUR&#8217;s personnel office, said that behind every piece of paperwork is a Marine out there who has got something coming, whether it&#8217;s danger pay, orders to a new base or a doctor&#8217;s bill.

Others in MARFOREUR, such as Maj. Miguel Ameigeiras, have no one underneath them to supvervise. Ameirgeiras, of Hollywood, Calif., a special assistant to the EUCOM deputy commander, hoped the conference would help him keep his own &#8220;Marine Corps house in order.&#8221;