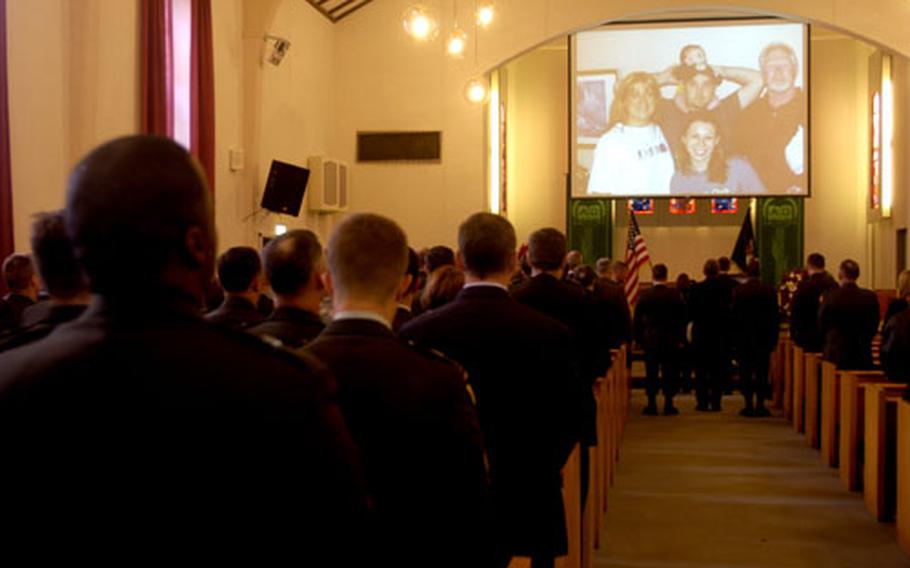 B&#214;BLINGEN, Germany &#8212; Staff Sgt. Patrick F. Kutschbach was remembered Tuesday as a strong, calm and reliable Green Beret who gave his life fighting for a cause in which he believed.

About 300 people, including many soldiers wearing Army dress-green uniforms, filled Panzer chapel in honor of the 25-year-old, who was killed Nov. 10 in Kapisa province, Afghanistan.

His vehicle was struck by a rocket-propelled grenade and small-arms fire. Two other soldiers were wounded.

Kutschbach&#8217;s widow, Ginger, and his mother, Debbie Huffner, were given gifts, among them a military shadow box that held the soldier&#8217;s awards and ribbons, including the Bronze Star Medal and Purple Heart.

Toward the end of the service, a last role call was called. Outside, a rifle volley was fired as mourners inside sat in silence. A few muffled sobs could be heard as taps was played. Some dabbed their eyes with tissues.

The somber, on-post tribute near Stuttgart contrasted with one held for Kutschbach on Nov. 19 in Upper St. Clair, Pa., a suburb of Pittsburgh.

It was there where Kutschbach&#8217;s funeral procession proceeded down a street lined with flag-waving residents and through firetrucks&#8217; extended ladders that formed an archway.

The Patriot Guard Riders, a national group of motorcyclists, helped provide escort. At Bethel Cemetery in nearby Bethel Park, many of the headstones had been adorned with U.S. flags prior to the procession&#8217;s arrival.

There were news cameras, police, a local congressman and two generals, according to one of his Green Beret unit mates who went to Pittsburgh and returned to Germany to deliver Tuesday&#8217;s eulogy.

&#8220;I could barely compose myself,&#8221; said the soldier, who asked that his name not be published. &#8220;I took comfort in their presence because everyone there meant it. Everyone there respected him.

&#8220;His family, friends and whoever was able to be in Pittsburgh seemed to be paying attention. It made all of us who were involved prouder than ever to be U.S. servicemembers.&#8221;