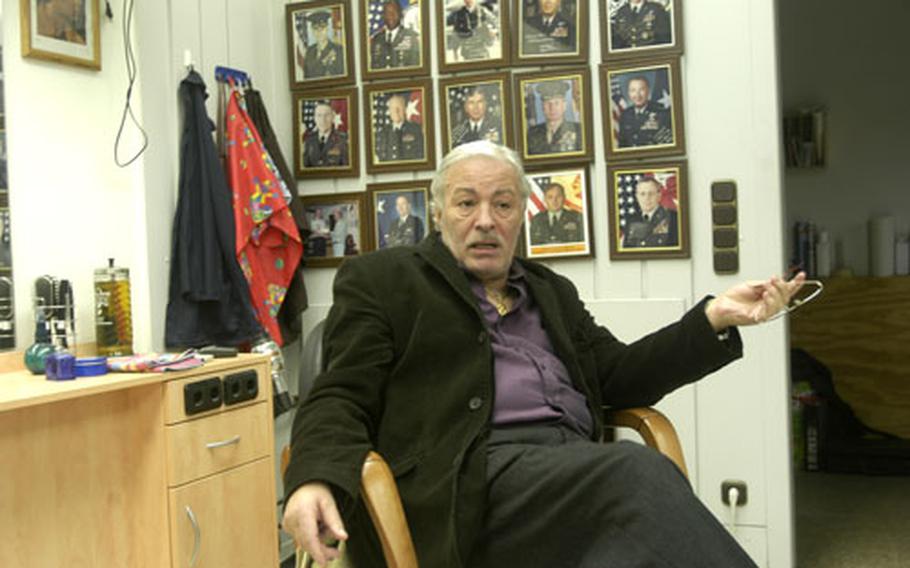 Giuseppe Muré sits in his barber shop at Kelley Barracks in Stuttgart, Germany, in front of autographed portraits of Gens. Peter Pace, William E. "Kip" Ward, Wesley Clark and others. Muré, a barber in the Stuttgart military community for 21 years, is resisting an attempt by AAFES to change the terms of his contract. (Charlie Coon/S&S)

STUTTGART, Germany &#8212; Somebody screwed up.

Mur&#233;, who for 21 years has worked as a barber in the Stuttgart military community, is clinging to the terms of his contract with the Army and Air Force Exchange Service. That contract, AAFES claims, has caused Mur&#233; to be overpaid by about 750 euros per month since April 2005.

AAFES &#8212; which operates businesses and oversees vendors at U.S. military installations &#8212; is not asking Mur&#233; to pay back any money. It just wants Mur&#233; to start operating under the terms of what it says the contract should have read in the first place.

In other words, take a 750-euro per month pay cut.

Mur&#233;, who operates a one-man barber shop at Kelley Barracks, said a deal is a deal: His contract runs through April 2010.

He had been paying 10 percent. The euro-to-dollar rate used to compute his paycheck would also be changed so that Mur&#233; would not lose any money, the notification said.

But in the contract he signed, the concessionaire fee was not changed &#8212; only the euro-to-dollar rate was changed &#8212; and Mur&#233; has been operating ever since under the errantly favorable terms.

Not that he is swimming in cash.

Business has been slow at Kelley Barracks.

Mur&#233; said he used to give 60 or more haircuts a day at Kelley and other installations in Stuttgart. On Monday, he gave 18 haircuts.

But he hopes business will pick up as the new Africa Command adds staff and as servicemembers and families start moving into the vacant, under-renovation housing at Kelley.

Last February, Mur&#233; received another letter from AAFES saying his contract would be changed to reflect the 39.73 percent fee. He wrote back to the AAFES contracting manager in Dallas, saying he would not accept the change.

On Nov. 15, he received another letter from AAFES stating that in February it would start taking 39.73 percent of his sales and that it didn&#8217;t need his signature to do so.

Konop acknowledged that Mur&#233; has recourse, such as appealing through his local German works council. Mur&#233; said he is ready to phone a lawyer.