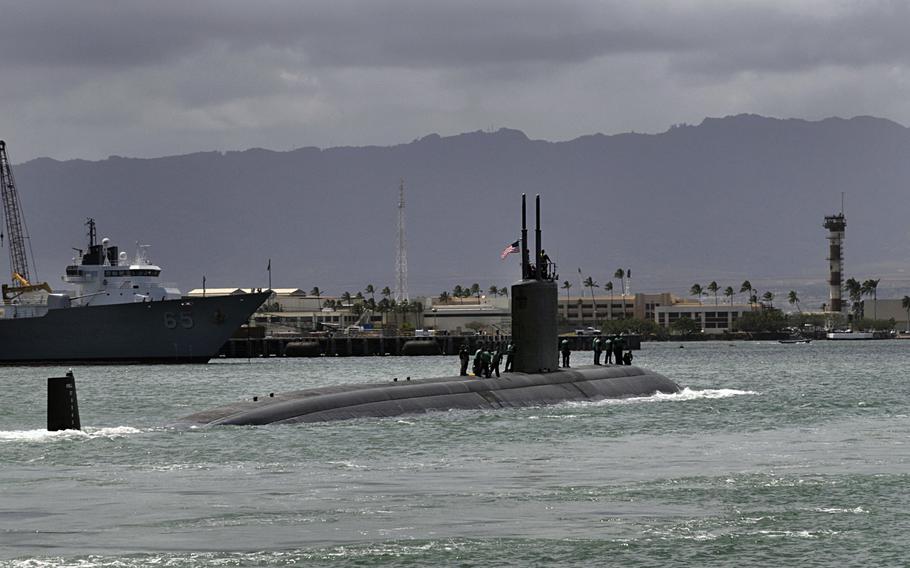 The Los Angeles-class submarine USS Tucson departs Joint Base Pearl Harbor-Hickam for a scheduled deployment to the western Pacific region in 2010. A new report by Rand Corp. said the United States should decrease its emphasis on large aircraft carriers in the Pacific and spend more on submarines. (U.S. Navy)

Faced with China’s growing anti-surface ship capacity, the United States should decrease its emphasis on large aircraft carriers in the Pacific and spend more on submarines, space capabilities and ways to make air bases and aircraft less vulnerable, according to a report released earlier this month by Rand Corp.

Capabilities were examined at seven-year intervals, beginning in 1996 and projecting to 2017, considering two “plausible” scenarios of conflict between the two countries: a Chinese invasion of Taiwan and its forcible occupation of the Spratly Islands. China claims sovereignty over both.

This past year, China expanded a number of the tiny Spratly atolls through dredging and has built several runways — even as the U.S. has denounced those moves as militarizing the archipelago.

“Over the next five to 15 years, if U.S. and (People’s Liberation Army) forces remain on roughly current trajectories, Asia will witness a progressively receding frontier of U.S. dominance,” the report said.

Although China is not close to catching up to the U.S. in terms of overall military power, that’s not necessary for it to control the region at its doorstep, the report said.

“No one wants war; nobody expects war,” said Eric Heginbotham, lead author and political scientist at Rand, when explaining the analysis’ purpose. “But I think the balance of power affects calculations on both sides. Balance of power has a major impact on the probability of war.”

Military dominance by the U.S., however, does not necessarily equate to deterrence in moments of instability when two nations could potentially consider the incentives for a first strike, he said.

“If you have a highly offensive force or set of weapons that are very forward deployed — sort of on the periphery of China — but not resilient to attack, then in a crisis, both sides could have incentives to strike first,” Heginbotham said. Attempting to restore U.S. dominance without thinking about the impact on crisis stability could inadvertently undermine the value of that supremacy, he said.

Since 1996, China’s ability to threaten the U.S. Navy surface fleet “at significant ranges from the mainland” has burgeoned, the report said.

China’s anti-surface capability has grown with the development of a long-range surveillance system to track surface ships at long distances, deployment of sophisticated anti-ship cruise missiles, acquisition of strike aircraft and ships with long ranges, and the use of larger, quieter submarines armed with cruise missiles.

“The impact of Chinese threats to carriers will likely be greatest during the first stages of conflict,” the report said.

The U.S. has means to mitigate those anti-surface capabilities, such as anti-missile systems and air patrols from aircraft carriers; however, some of those measures diminish the U.S. military’s ability to project power, the report said.

“Holding carriers farther from the scene of the main battle area would entail longer transit times for combat aircraft, fewer aircraft on station and an increased demand for U.S. Air Force tanker support,” the report said.

In the event of a Taiwan conflict in 2017, U.S. carriers would be at significant risk, and in a Spratly Islands conflict, they would also be at risk, but to a lesser degree, the analysis concluded.

The “growing threat to U.S. surface ships” — as well as the vulnerability of U.S. air bases to Chinese missiles — “is arguably the most serious challenge facing U.S. forces in any potential China scenario,” the report said.

China’s ongoing modernization of air and submarine capabilities that pose a more “certain” threat to carrier strike groups, the report said. China’s modern diesel sub numbers rose from two in 1996 to 37 this year, and all but four are armed with cruise missiles and torpedoes.

Rand modeling found that “the effectiveness of the Chinese submarine fleet (as measured by the number of attack opportunities it might achieve against carriers) rose by roughly an order of magnitude between 1996 and 2010, and that it will continue to improve through 2017.”

“Chinese submarines would present a credible threat to U.S. surface ships in a conflict over Taiwan or the South China Sea,” the report said.

Meanwhile, the growing size and sophistication of Chinese ballistic and cruise missile forces puts all U.S. regional air bases at risk, Heginbotham said. And China’s force of modern fighters and other attack aircraft could deploy quickly and en masse to a geographically close conflict involving Taiwan, he said.

There are options for the U.S. to improve resiliency, such as finding new basing options farther from China, making the force more survivable, emphasizing area-denial capacity and ensuring counterattack capability, Heginbotham said.

“All of that could contribute to deterrence and defense and not result in greater crisis instability,” he said.