Study: Troops discharged for misconduct at greater risk of homelessness 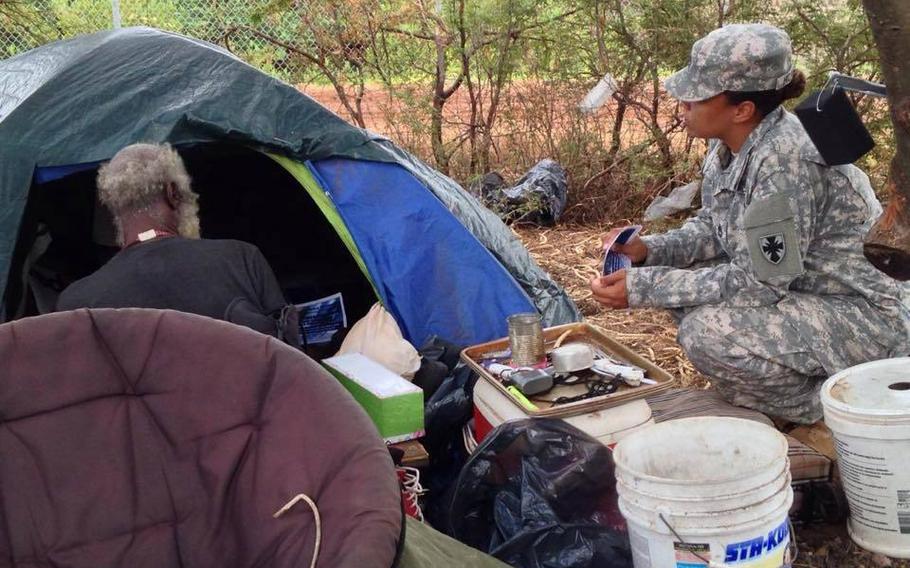 Sgt. 1st Class Nicole Howell talks with a homeless veteran about the upcoming 2015 Veterans Stand Down, Aug. 5, 2015. Troops separated from military service because of misconduct are far more likely to become homeless than other veterans, a new study has found. (U.S. Army)

Troops separated from military service because of misconduct are far more likely to become homeless than other veterans, a study released Tuesday has found.

Researchers with the Veterans Affairs Salt Lake City Health Care System in Utah found that more than a quarter of veterans who were homeless at their first Veterans Affairs visit had been separated for misconduct, with a risk for homelessness nearly five times greater than that for troops with normal separations.

Researchers had expected to find higher rates of homelessness for veterans with misconduct-related separations — troops discharged because of drug use, unauthorized absences and other misconduct.

“But we were surprised at how high the rates were,” said Jamison D. Fargo at Utah State University, one of the authors of the study, which was published in the Aug. 25 issue of the Journal of the American Medical Association.

The researchers analyzed VA records of 448,290 active-duty servicemembers who had been deployed to Iraq or Afghanistan, separated between 2001 and 2011 and were eligible for and used VA services. About half were from the Army, about two-thirds had had combat exposure, most were men and nearly all were enlisted.

The higher percentage of homelessness among those with misconduct-related discharges found within the first year of seeking VA services suggests that “over the course of the year, there are increased difficulties in re-integrating into civilian life and creating a stable living situation and lifestyle,” Fargo said.

The length of time a veteran was homeless, or whether there were repeated instances of homelessness, was not captured in the study. Homeless veterans were defined as those who had indicated they were homeless, those who had sought the VA’s housing services or both.

Troops who were dishonorably discharged were not included in the study because that discharge renders them ineligible for VA services. Misconduct-related discharges usually are “other than honorable” or “general.”

Previous research on homeless veterans found risk factors such as being male and being younger or older than average, as well as drug or alcohol problems and mental-health issues. “The biggest risk factor is always economic-related,” Fargo said.

Rates of homelessness in the study for veterans who had been discharged honorably — from 0.2 percent at the first VA visit to 1.4 percent after five years — were more in keeping with the national rate of homelessness, Fargo said, which hovers at a little less than 1 percent.

But for veterans with misconduct-related discharges, the rate was far higher: from 1.3 percent at an initial VA visit to 9.8 percent within five years.

According to the National Coalition for Homeless Veterans, homeless veterans make up about 12 percent of the adult homeless population. Most are single, live in urban areas and suffer from mental illness, alcohol and/or substance abuse, or other disorders. About 41 percent are between the ages of 31 and 50.

“What this study does is help us pinpoint a risk factor,” Fargo said. According to the study authors, the results “represent the strongest risk factor for homelessness among U.S. veterans observed to date.”

“It calls for action on the part of the VA and the Department of Defense,” Fargo said. “Policymakers need to address it.”

In 2009, the Obama administration committed to ending veteran homelessness in the U.S. by the end of this year, and those efforts apparently have had success. According a 2014 estimate by the Department of Housing and Urban Development, some 49,933 veterans were homeless on a single night. That estimate represents a 14 percent decline compared with the Department of Housing and Urban Development’s 2013 estimate and a 33 percent decline compared with its 2009 estimate.