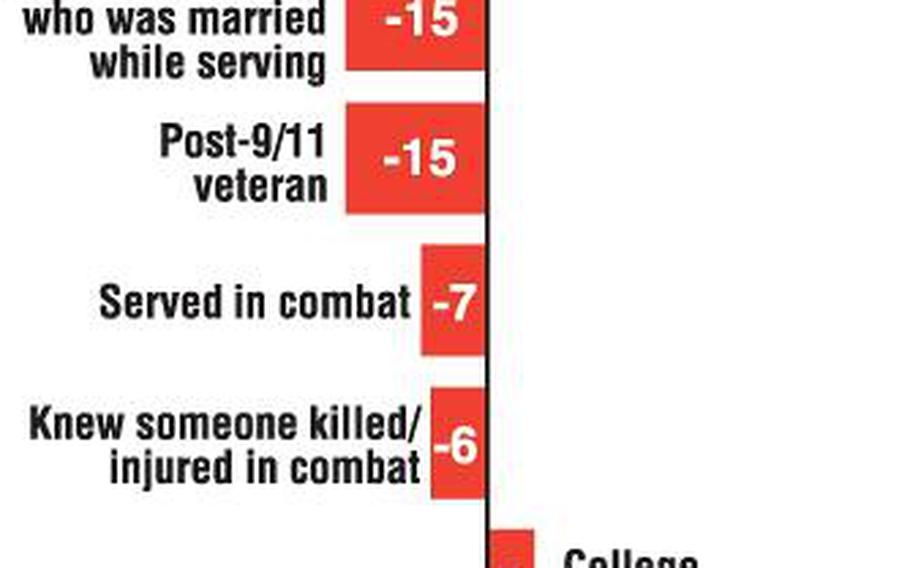 WASHINGTON &mdash; Nearly half of the veterans who served since 9/11 have struggled with the transition back to civilian life &mdash; and being married is likely to make it harder, according to a survey released Thursday.

The Pew Research Center, an opinion research group in Washington, looked at factors that predict whether a servicemember would have an easier or harder time stepping out of uniform, and the survey revealed that marriage negatively affects how well a veteran will do.

Those who were married during their service had a significantly tougher time after returning than did their single counterparts. Chances of an easy exit from the military dropped from 63 percent for single troops to 48 percent for married troops, according to the report.

The author, Rich Morin, said that the impact on family life during the multiple deployments of the last 10 years of war is likely why married vets struggled. About half of married veterans said deploying had a negative impact on their spouse, and a majority of that group had family problems after being discharged.

Overall, more than 60 percent of veterans who had marital problems while deployed had a hard time returning to civilian life.

The negative impact of marriage only held true for post-9/11 vets. In past generations, there were significantly fewer married servicemembers, Morin said.

The report also found several other factors that predict which vets will have difficulty after leaving the military: those who experienced combat, and especially if they endured a traumatic event, were seriously injured or served with someone who was killed or injured.

A psychological trauma had the biggest impact on transition, making it 26 percent less likely that becoming a civilian will be easy &mdash; the largest difference, positive or negative, reported in the study.

More than 40 percent of post-9/11 veterans said they experienced an emotionally traumatic or distressing event, with more than half of those veterans reporting flashbacks.

Veterans from the last 10 years of war have a harder time adjusting than veterans from earlier generations, the survey found. However, researchers caution that post-9/11 vets have been interviewed close to their military service, while older vets have more distance from that experience and their views could have changed over time.

There are also protective factors that help the ease of transition for a veteran. Officers, those with a college education, those who had a clear understanding of their mission, and most signifincantly, those who regularly attend religious services, had the easiest time transitioning out of the military, Pew found.

The more frequently a veteran attended religious services, the more likely they would have an easy time making the transition to civilian. Religiosity was a unique protective factor for 9/11 veterans. Vets from earlier eras didn&rsquo;t see the same positive impact from religion, according to the report.

The Pew Research Center looked at a total of 18 variables and found that race, age at the time of discharge, having children under 18 while serving, length of service and number of deployments did not affect a veteran&rsquo;s transition.