Study reveals Navy installations carry most risk of sexual assault, but not why 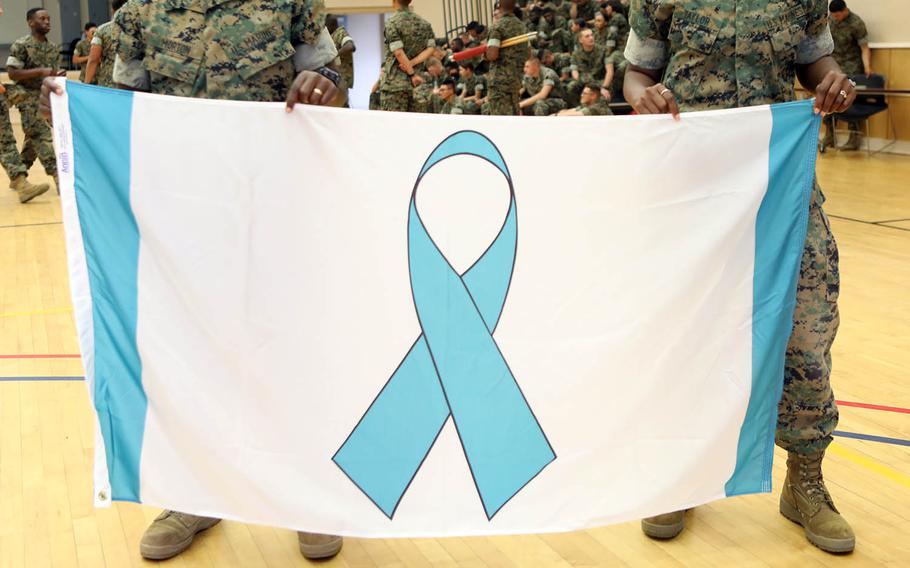 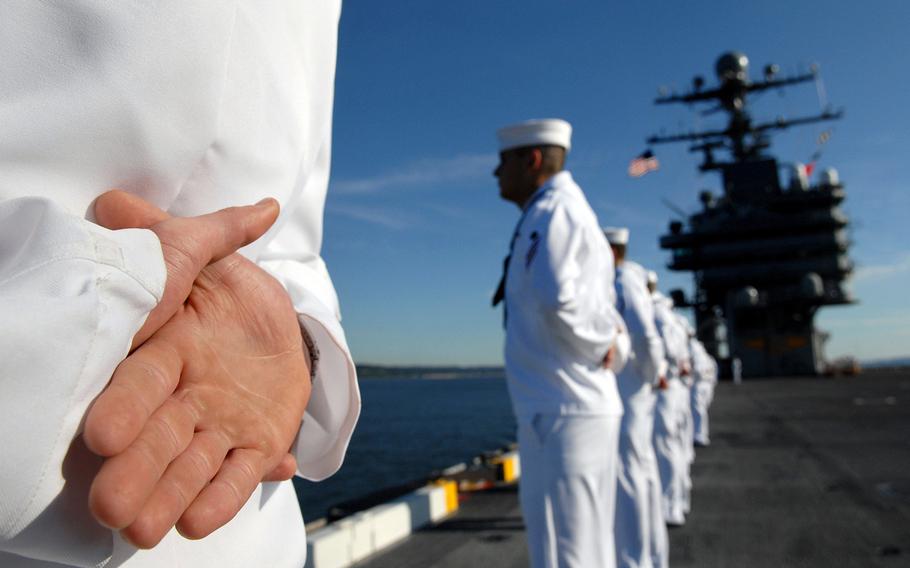 A Rand Corp. report requested by the Department of Defense and published last month offered a glimpse at where sexual assault was happening in the military, but experts say it failed to answer one of the most important questions: Why?

“Our model estimates that more than one in six women assigned to duty at that installation were sexually assaulted in FY 2014,” the report said.

On average, men in the Navy were more likely to be sexually assaulted than those in other military branches. The Navy had the highest average sexual-assault risk for men — 1.5 percent — on installations studied servicewide, according to the report.

The Marine Corps had the highest average risk for women — about 8 percent overall — while the Navy came in second with about 7 percent risk.

Across all services, men and women in the Air Force had the lowest risk of sexual assault, according to the study.

Rand’s authors wrote in the report that they could not definitively identify “what it is about these duty assignments that leads to their association with the highest risk of sexual assault” based on the data.

In an official statement to Stars and Stripes, the Navy said the report’s “information will be vital to us in determining where and how to target training, prevention and response resources.”

“The Navy has further engaged with Rand to help us take a closer look at the conclusions of this report by conducting follow-on projects to provide more actionable information about where sexual assault risk is highest and lowest in the Navy,” the statement said.

But information about where sexual assaults are happening is not enough. The Navy said it will work to understand what is causing numbers to be higher in certain regions.

“We take sexual assault seriously and specifically want to understand the ‘why’ presented by the data,” the official Navy statement said. “Identifying protective and risk factors is essential to mitigating the risk of sexual assault for our sailors.”

Patterns emerge Some patterns in the report data could point to better understanding of the causes.

Authors said the correlation between ships and sexual assault was “the clearest pattern of high risk we recognize.” All but one of the Navy’s 15 installations with the highest risk of sexual assault for men were ships or clusters of ships; for female sailors, 13 of the 15 were ships “including eight of the [Navy’s] 10 aircraft carriers,” according to the report.

Because “it is not just one or two ships that top the Navy’s lists” of sexual-assault risk, “there may be something about assignment to ships that elevates risk for women and men,” the report said.

Vessels not at sea also had high instances of sexual assault. The USS Abraham Lincoln ranked among installations across all branches with the highest risk of sexual assault for women in 2014 while it was out of rotation for maintenance, according to the report.

The phenomenon may serve as evidence that ships’ high sexual-assault risks are “not exclusively due to life at sea or the cycles of shore leave experienced by deployed sailors,” the report said.

Combat roles Another pattern in the data: Many of the installations with the highest rates of sexual assault were home to combat units — including Navy ships, according to the report.

The trend appeared across all branches, with “the highest-risk list” for men in the Army including “many installations with a more prominent combat unit presence.”

“U.S. Pacific Fleet, U.S. Fleet Forces Command, U.S. Forces Command, Pacific Air Forces and others with direct combat roles were among the commands with the highest total and command-specific risk,” the report said.

The data follows a trend noticed in a 2012 anonymous survey by the Department of Veterans Affairs that found about half of all women deployed to Afghanistan reported being sexually harassed, and about one in four said they’d been sexually assaulted.

While the report’s data does not explicitly show what caused the identified patterns, its authors offered a few theories.

The Rand authors also noted that installations with combat units have more personnel living on base or on a ship than noncombat operations “with a greater proportion of support,” the report said.

Col. Don Christensen, retired chief prosecutor of the Air Force and president of Protect Our Defenders — a group that provides legal assistance and advocacy for military sexual-assault victims — said there could be myriad reasons why combat units have higher instances of sexual assault.

“You have people away and in a dangerous situation; I could see how people in that situation are less concerned about rules and to see an increase sexual assault,” Christensen said.

“We know from that data that in a combat environment ... women definitely are subjected to more sexual harassment and sexual assault,” Christensen said. “The data’s really strong that if you have a [group] that views women as less than equal, someone who’s OK to harass … it leads to an environment that is more accepting of sexual assault.”

Christensen said understanding the reason behind higher sexual assaults in combat environments could lead to solutions – but that would take further study.

“I don’t think anyone’s ever looked at why, which is a problem,” he said.

Consistencies as clues Another pattern noted was the consistency of the installations on the highest- or lowest-risk lists for both men and women in three of the four branches studied. Across the Navy, Air Force and Army, installations with high and low risk levels largely matched between the genders.

It also said consistencies among some locations and types of commands could suggest characteristics that factor into the likelihood of sexual assault. For example, servicemembers assigned to commands with typically smaller officer-to-enlisted ratios and higher-ranking personnel — such as medical centers and those working in the Washington area — were less likely to experience sexual assault, according to the report.

“Much of this association can be explained by the individual characteristics of the personnel assigned to these locations,” the report said.

But without more detailed information on the installations — such as “particular units, occupations, locations, missions, activities or other characteristics” — the report’s authors could not definitively pinpoint reasons for the patterns.

In the summary of their findings, the authors said the study was conducted as a “proof-of-concept,” and the data they analyzed was not broken down into more specific subgroups. They suggested further research and sorting of subgroups of personnel will enable better targeted “training, prevention and response resources.”

“We did not explore the full array of alternative clusterings of personnel that might be especially revealing of the nature and distribution of risk,” the report said. “For instance, more useful than the high-level commands we examined … might be their subordinate commands.”

In continuing work with the Navy, the study’s authors are to retooling their approach to examining risk on Navy ships to more closely identify factors associated with sexual assault. For example, rather than clustering ships by ZIP code as they did in the September study, “the ships might be clustered by ship class, home port, strike group, mission type or port call.”

‘Eye-opening’ numbers Sexual-assault reports have climbed almost every year since the study was conducted in 2014 — and more than doubled in the past decade, according to annual Department of Defense Sexual Assault Prevention and Response Office reports. In fiscal year 2017, there were 6,769 reports – up from 2,846 in FY 2007.

While the numbers are growing, Christensen said they can become lost compared to the 1.4 million people serving in the U.S. military. That’s why he said the unique nature of this study breaking down risk by installation was “eye-opening.”

“When you hear the numbers … it kind of gets lost in that 1.4 million,” he said. “But then when you see an installation like Fort Hood had almost 900 men and women who were sexually assaulted on one base. Does that base commander understand the extent of the problem?”

Just 54 percent of substantiated sexual-assault cases were referred to courts-martial for prosecution in FY 2017, according to the SAPR annual report. That’s down from 71 percent in FY 2013.

The Navy told Stars and Stripes in an official statement that there might be evidence to show the increasing reports could not mean that sexual assault is happening more often – rather, it could be that victims are more comfortable reporting their assaults. In the Navy, sexual-assault reports increased from 1,295 in 2014 to 1,585 in 2017, according to the service.

In the 2016 Office of People Analytics Workplace and Gender Relations Survey, the number of sailors experiencing unwanted sexual contact dropped from 7,400 in FY 2014 to 5,300 in FY 2016, the Navy in its official statement. The Navy said the study “indicates that the occurrence of sexual assault has decreased significantly” despite the increase in reports.

Search for solutions Before significant change can happen, Christensen said leadership must be willing to make stronger statements against sexual assault.

“The leadership still hasn’t gotten it. When they testify to Congress, they know what to say. But out on the boats … they don’t act as they testify,” he said. “I don’t think there’s a real serious effort to tamp down sexual harassment. I think they view it as boys being boys; what did you expect when you came into this male-dominated career field?”

But some leaders are coming forward in the wake of the study to remind servicemembers of the seriousness of sexual assault. In Japan, where 50 of the 372 female sailors Rand surveyed had experienced a sexual assault, Naval Forces Japan commander Rear Adm. Gregory Fenton told Stars and Stripes he has a message for sailors there.

“Sexual harassment and sexual assault will not be tolerated,” he said. “Every one of us has earned the right to wear the uniform.”

Fenton said he is briefed after each sexual assault reported at one of the bases under his jurisdiction.

“The No. 1 goal is to get to the prevention side,” he said. “[We want to] take any lessons learned into prevention.”