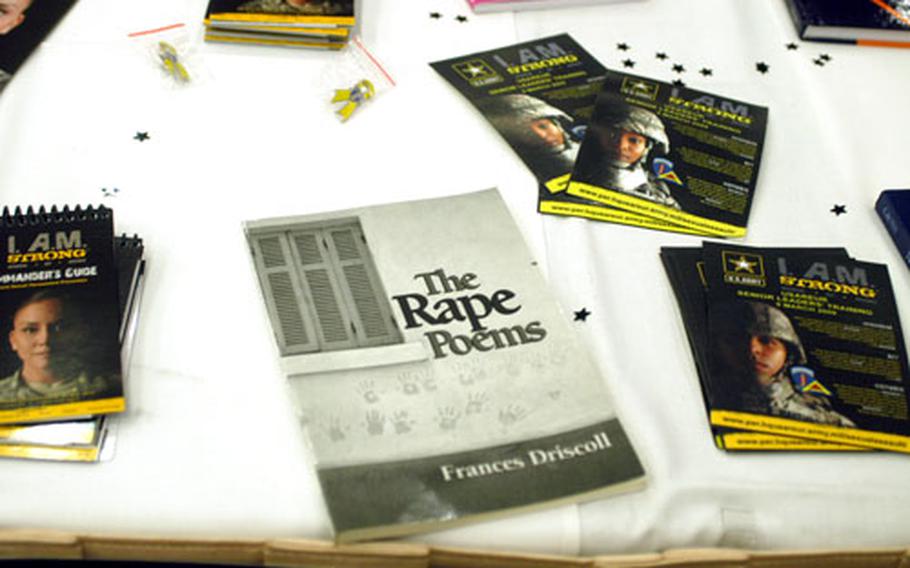 Senior leaders from across U.S. Army Europe spent a day last week hearing from four experts on the dynamics of acquaintance rape, far and away the most frequent sort of rape in the military and civilian life. The seminar, which was closed to the media, was part of a new Army campaign to prevent sexual assault by educating male soldiers to include women in a "band of brothers and sisters," and vow to protect rather than exploit them. (Nancy Montgomery / S&S)

Average age, 28, all employed and attending college part time. The study, they were told, was on life experiences, including sexual experiences.

In that survey, 120 men described behavior amounting to the legal definition of rape &#8212; in 483 rapes of women they knew. More than that said they had attempted. Not one was reported.

Of the 120 men, 44 committed rape once. But 76 men committed 439 rapes, an average of nearly six rapes per man, according to Lisak.

These are "the undetected rapists" &#8212; predators &#8212; that Lisak says comprise about 4 percent to 6 percent of the male population, who account for the vast majority of rapes, and are rarely caught or punished.

His research and that of other social scientists over the past 20 years has revealed common characteristics in men who rape women they know or meet at a bar or party:

They are adept at identifying likely, vulnerable victims.They plan their attacks, using sophisticated strategies to groom their victims for attack, and to isolate them physically.They use "instrumental" not gratuitous violence; exhibit strong impulse control and use only as much violence as is needed to terrify and coerce their victims into submission.They use power, control, manipulation and threats &#8212; backed up by physical force, and almost never resort to weapons such as knives or guns.They use alcohol deliberately to render victims more vulnerable to attack, or completely unconscious.Lisak&#8217;s work is "the gold standard," said Elizabeth Joyce at the National Center for Victims of Crime in Washington, D.C. "He&#8217;s contributed a great deal to understanding how hard it is to &#8216;typecast&#8217; rapists," she wrote in an e-mail. "To think that a &#8216;clean-cut, nice young man&#8217; in your college class (or your military unit) might be plotting to drug and sexually assault you! That&#8217;s not what most people expect."

Lisak says undetected rapists are unlikely to be rehabilitated &#8212; just like knife-wielding stranger rapists &#8212; and must be incarcerated.

But he has also identified two types of third-party actors in non-stranger rape &#8212; who can, he says, be reached through education, and on whom the Air Force, and, now the Army, are focusing their attention.

"Facilitators" offer encouragement, reinforcing the rapists&#8217; behavior. They may engage in sexual assault themselves in certain circumstances &#8212; a fraternity gang rape or two soldiers raping a woman who&#8217;s passed out &#8212; but do not become "entrenched in that behavior," according to a 2004 Air Force report assessing its sexual assault prevention and response, and to which Lisak was a major contributor. Lisak was enlisted by the Air Force after dozens of female Air Force Academy cadets in 2003 said that they had been raped, and that they were discouraged from reporting it by a pattern of retribution against cadets who did."Bystanders" are just that. They have knowledge of the event but fail to act to stop it.Lisak says prevention efforts should focus on "the far more numerous bystanders &#8212; men and women who are part of the social and cultural milieu in which rapes are spawned and who can be mobilized to identify perpetrators and intervene in high-risk situations."

"Maximum investment should be directed at facilitators and bystanders," the Air Force report said.

The Army is now following suit. Its new sexual assault prevention campaign is called "I. A. M. Strong": for intervene, act and motivate.

"When I recognize a threat to my fellow soldiers, I will have the personal courage to intervene and prevent sexual assault," a new brochure reads. "I am a warrior and a member of a team. I will intervene &#8230; We are American soldiers. Motivated to keep our fellow soldiers safe."