Study looking at dependents schools on US soil 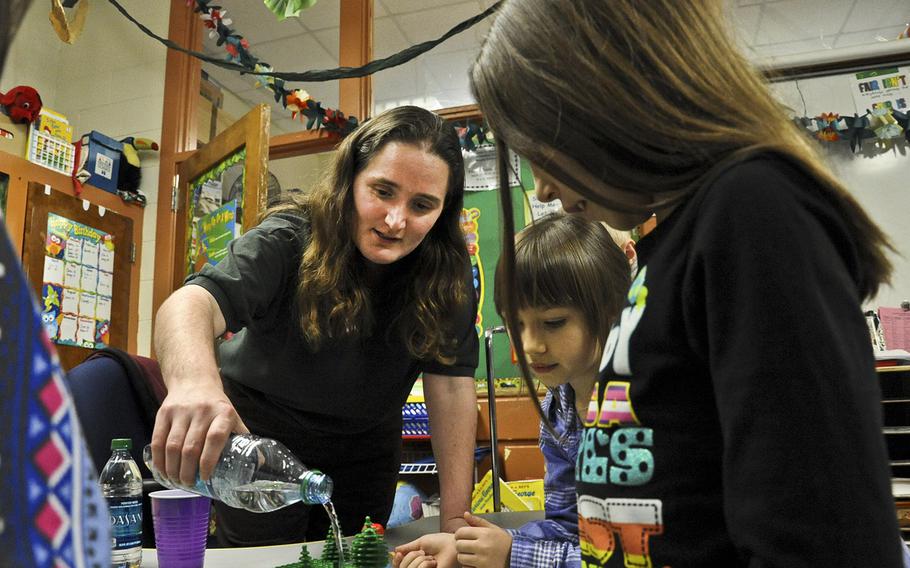 Magen McCollough, Williamsburg Environmental Group civil engineer, pours water over a simulated habitat to show the effects of water runoff during the Introduce a Girl to Engineering Day at John H. Russell Elementary School in Quantico, Va., in February 2012. The Pentagon has asked the RAND Corp. to study whether the DOD still needs to run schools in the United States. (Photo courtesy of the U.S. Marines)

WASHINGTON — In an era of increasingly scarce defense dollars, the Pentagon has ordered a study to determine whether the Department of Defense needs to remain in the business of educating schoolchildren in the continental United States.

The study started in recent weeks and will review 60 schools on 15 North American military installations that together educate about 23,000 students at an annual cost of nearly $376 million.

They’ll be compared to nearby civilian schools and assessed for school performance and attendance, all with the intention to “effectively balance cost and quality considerations,” according to officials.

The $905,000 study, being conducted by the RAND Corp., a nonprofit think tank, applies to only a tiny minority of 1.2 million school-age military children worldwide.

In the United States, most military dependent schoolchildren attend local schools, some of which operate on military installations. And there is no discussion of changing the structure of schools that the Department of Defense Education Activity, or DODEA, operates overseas, officials say.

The worldwide tab for DODEA schools is nearly $1.9 billion.

DODEA spokeswoman Elaine Kanellis said study recommendations are due by early fall 2014, after which Secretary of Defense Chuck Hagel and other Pentagon officials will decide how to proceed.

Neither DODEA nor the larger DOD have decided to shut down any schools, she said.

“The study is just beginning, and there are no preconceived notions or outcomes,” she said. “The study is going to be very thorough, very pragmatic, and it will consider input from commands, teachers, community members. It will look at performance data — it will be looking at all aspects.”

Maintaining the status quo, with schools remaining under DODEA Divestiture, with on-base schools shutting down and students transferring to local school districts Transferring students and facilities alike to local schools Creating a new public school district under state law on the installation Establishing charter schools Kanellis said the RAND study would not necessarily result in a “one-size-fits-all recommendation,” leaving open the possibility of different outcomes at different schools or military bases.

The 60 schools, known as Domestic Dependent Elementary and Secondary Schools, operate in seven states and were primarily opened after the 1948 desegregation of the military to sidestep laws in states that required separate education for white and black children. Others were started in remote locations where no schools existed.

DOD also spends another $23 million a year on contracts with local districts to educate children in areas without enough funding to handle military-connected children, or with limits on education of children who live on federal installations.

It’s worth assessing the DODEA-run schools, said Joyce Raezer, executive director of the National Military Family Association. But even if good reason is found to eliminate or change how they’re managed, carrying out the recommendations could be complicated and expensive, she said.

Schools districts might ask DOD for money to cover the cost of educating more children, or may need help bringing 50’s-era military school buildings up to code.

“The school districts have to ask, where would the extra money come from to educate these kids,” Raezer said. “If funding is not available, the quality of education for every child in the school district will suffer.”

Several similar studies have been conducted, the last of which concluded in 2003, and resulted in little action, she said.

“They do this periodically, and generally they go through the exercise, look at civilian schools, look at capacity, and come to the conclusion that parents like (DODEA schools), commanders like them, and it would cost too much to transfer them to civilian school districts.”