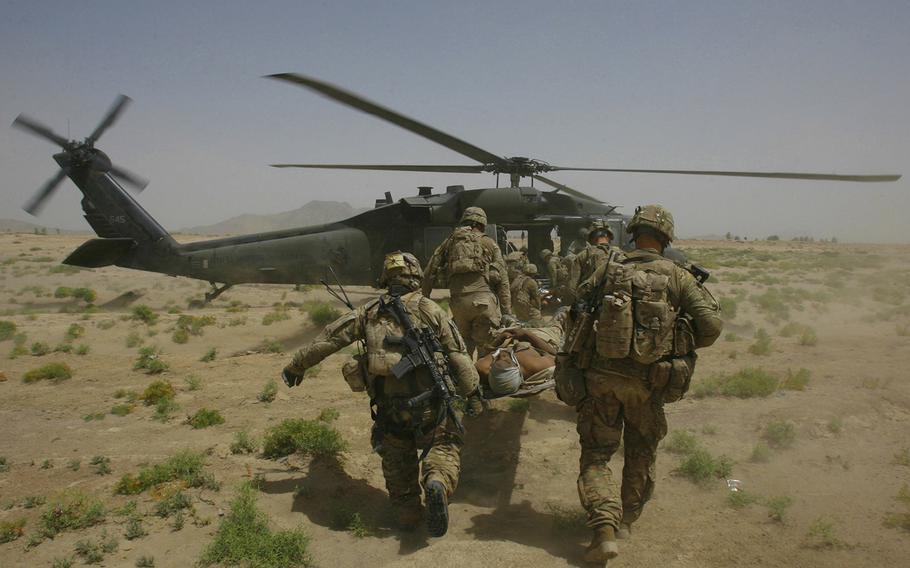 A casualty is evacuated to a medevac helicopter after being injured in an improvised explosive device attack near Molla Dust in Kandahar province Afghanistan on June 15, 2011. (Stars and Stripes)

KAISERSLAUTERN, Germany — An estimated 359 lives were saved in Afghanistan after the U.S. military sought to treat critically-injured troops within the so-called “golden hour,” a study released Wednesday concluded.

The study, published in the Journal of the American Medical Association, is the first of its kind to substantiate the effectiveness of getting critically injured servicemembers to appropriate care within 60 minutes,said lead author Russ Kotwal, a medical doctor and retired Army colonel.

Combing through years of medical records and flight data, researchers found that after implementation of the “golden hour” rule, about six percent fewer troops died before arriving at a military hospital. The decline occurred despite an increase in severity and complexity of battlefield wounds, as the cause of injuries shifted from gunshots to explosives.

The report also found that more servicemembers returned to duty within 72 hours. After the rule was implemented, this rose from 33.5 percent to 47.3 percent. The percentage of overall fatalities, meanwhile, dropped from 13.7 percent to 7.6 percent.

Given the nature of injuries in Afghanistan, early blood transfusions and initial treatment at field hospitals and by forward surgical teams also contributed to better survival rates, the study found.

The study “demonstrates the effectiveness of combining advanced trauma care capability with informed policy,” said Todd Rasmussen, a doctor with the U.S. Combat Casualty Care Research Program, in a commentary published with the study.

The U.S. military over the years has made great strides in getting the wounded to definitive care more quickly. Transport time shrunk from 10 hours in World War II to five hours in the Korean conflict to one hour in the Vietnam War, primarily owing to the use of helicopters, which had their operational debut in Korea.

The one-hour standard was implemented in Iraq. But Afghanistan, with its rugged terrain, posed more of a challenge to trauma crews.

On June 15, 2009, former Defense Secretary Robert Gates ordered a standard of 60 minutes or less from call to arrival at a trauma center for the transport of critically-injured troops in Afghanistan, cutting in half the previous goal of two hours.

Gates directed that more medical evacuation helicopters be assigned to Afghanistan and at more forward bases closer to troops in the field.

The study found that following Gates’ order, among 4,542 casualties with detailed data, the median transport time decreased from 90 minutes to 43 minutes. The number of air evacuation missions that achieved transport times under an hour jumped from 24.2 percent to 75.2 percent.

Transport times and fatality rates in Afghanistan were already beginning to fall prior to the “golden hour” standard, but the study noted a more rapid decline after its implementation. Using statistical modeling, they estimate 359 lives were potentially saved.

Other efforts reduced time between injury and treatment. Medics trained in blood-transfusion protocols and critical care paramedics and nurses were assigned to flights more routinely, resulting in earlier availability of blood products and advanced care. Small, mobile surgical teams were dispersed across the battlefield, bringing major surgical capability closer to the point of injury.

Hemorrhage is currently the prevailing cause of combat death — and also one of the most survivable, Kotwal said.

“Increased availability of blood transfusions on evacuation platforms and quicker evacuation response allowed transfusions to be performed earlier en route and in the hospital, possibly enabling casualties to survive longer,” he said in an email.

But those gains came at a potential cost, Kotwal said. One statistic that changed little after the mandate was the number of troops who later died of wounds, from 4.1 percent to 4.3 percent. This suggests that rapid evacuation combined with earlier en route and facility-based care resulted in survival but with risk for surviving with long-term injuries or later death.