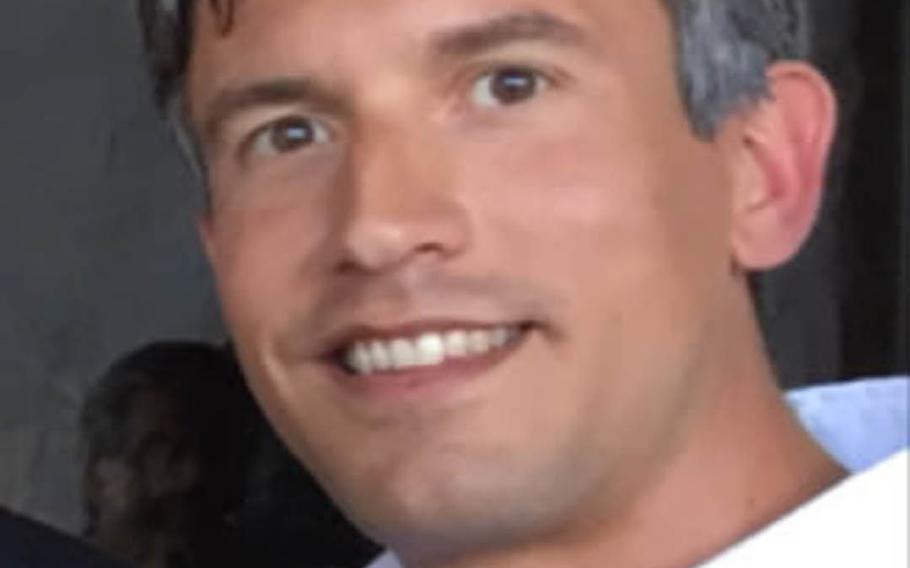 While Americans suffering from ailments such as PTSD, cancer, rheumatoid arthritis, Tourette's syndrome, complications from HIV/AIDS, glaucoma, epilepsy, Parkinson's and Alzheimer's diseases have sought relief through medical cannabis -- legal in half the country -- the federal government's position is that the plant has no accepted medical use in treatment and a high potential for abuse. (Miguel Lara/U.S. Air Force) 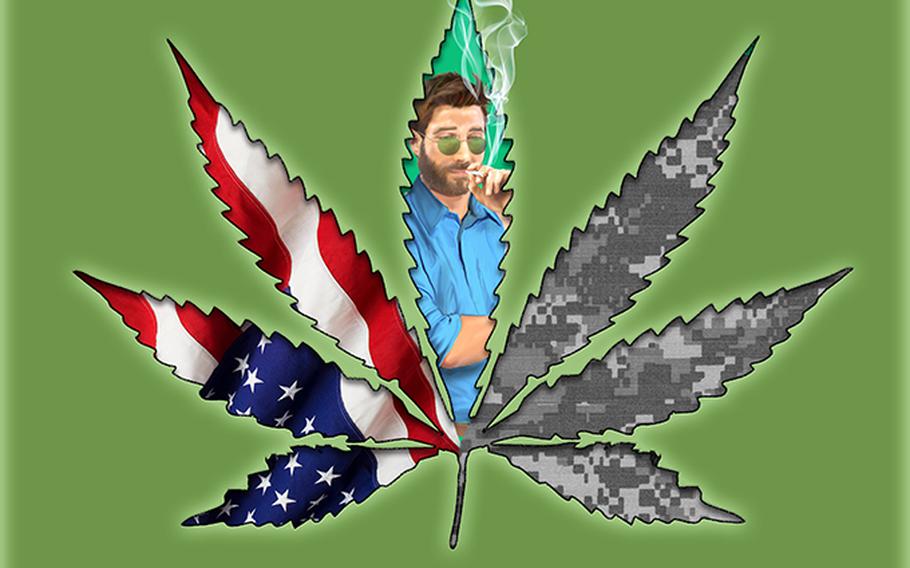 Roberto Pickering’s story is all too familiar.

The infantry Marine says he fought during the invasion of Iraq in 2003, lost some “good buddies” and returned to civilian life a “basket case” from battling a new enemy: post-traumatic stress disorder.

Pickering says he was pumped full of medications — from Valium to Zoloft, OxyContin, Seroquel, Lithium, Ambien and more — by Department of Veterans Affairs doctors. He tried to go back to school but had trouble adjusting.

He recoiled further after one friend took his own life and another died of a heroin overdose after becoming dependent on opioids through his medical care. Pickering moved into his parents’ California basement and found solace in the bottle while his life spiraled out of control.

Unlike thousands of post-9/11 veterans who have committed suicide, Pickering then found another way to cope: He began experimenting with marijuana about 10 years ago.

“This war doesn’t end when you come back,” he said. Cannabis “really improved my quality of life … I found what works for me.”

Using marijuana regularly, he said, his angry outbursts diminished and he was able to get a good night’s sleep. He said he was able to kick his drinking habit and, best of all, he didn’t have to take the litany of pills he calls toxic. Pickering said he usually smokes a bit at night and calls himself a responsible family man, far from the stereotype of a coach-potato stoner.

He doesn’t know why marijuana changed his life, and researchers can only guess, because the plant has never been studied as a treatment for veterans’ PTSD. Despite state ballot initiatives to legalize marijuana for medical and nonmedical use in recent years, earlier this month it again received the highest drug classification by the Drug Enforcement Administration.

A recently approved $2.15 million study — paid for by the state of Colorado and conducted by researchers from the Multidisciplinary Association for Psychedelic Studies, the University of Pennsylvania, the University of Colorado, Johns Hopkins University and the Scottsdale Research Institute — could change all of that. While Americans like Pickering, suffering from ailments including PTSD, cancer, rheumatoid arthritis, Tourette’s syndrome, complications from HIV/AIDS, glaucoma, epilepsy, Parkinson’s and Alzheimer’s diseases have sought relief through medical cannabis — legal in half the country — the federal government’s position is that the plant has no accepted medical use in treatment and a high potential for abuse.

“Smoked marijuana has not withstood the rigors of science — it is not medicine, and it is not safe,” a DEA position paper on cannabis from 2013 said.

Federal authorities are digging in their heels on marijuana’s potential benefits, but they are also increasing the amount available for research and making it easier to manufacture for scientific purposes.

The study, which is about to begin accepting participants, is a two-phase random, placebo-controlled, multisite study that will assess the safety and efficacy of four types of smoked marijuana to manage chronic, treatment-resistant PTSD symptoms, said Rebecca Matthews, a MAPS clinical trial leader working with the team.

In the first phase, 76 participants will smoke randomly assigned types of marijuana, including a placebo strain, from a pipe for three weeks. They will keep a diary to describe their experiences. They will then abstain from smoking for two weeks.

The second phase is a repeat of the first. Afterward, participants will follow up with the researchers for six months. The team will track measurements of PTSD and PTSD symptoms and safety data throughout.

The aim is to provide information on “marijuana dosing, composition, side effects and specific areas of benefit to clinicians and legislators considering marijuana as an acceptable treatment for PTSD,” Matthews said.

Researchers plan to start recruiting veterans in September, adding two participants per month, per site. The study should run about two years.

“By working with chronic treatment-resistant veterans, we address a national emergency and limit variability at the potential expense of generalizability,” Matthews said. “Further research will be needed to determine if these results will apply to other groups of PTSD sufferers.”

The study’s principal investigator, Dr. Sue Sisley of the Scottsdale Research Institute in Phoenix, said the hypothesis for the study is that cannabis may improve PTSD symptoms in a dose-dependent manner.

“I have no preconceived notions about the outcome of the study,” she said. “I’m not pro-cannabis; I am strictly pro-science. I’m actually not a fan of cannabis, and I’ve never tried it personally. I care deeply about our military veterans, and I am determined to find new treatments for PTSD — besides the only two [Food and Drug Administration] approved medicines on the market, Zoloft and Paxil, which are both highly disappointing.”

The study could discount or verify an argument by VA doctors and opponents of pot for PTSD treatment, who claim cannabis masks symptoms and doesn’t treat them like exposure therapy is thought to, Sisley said.

“Nobody is arguing [cannabis] is a cure [for PTSD],” she added. “ ... What we are hoping is that cannabis is alleviating the suffering of PTSD patients and not just masking it. This is a distinction that can only be evaluated through a randomized controlled trial.”

The research team has struggled to get to this point.

The study’s protocol, developed in 2010, has been revamped several times to deal with FDA and U.S. Public Health Service issues and ran into challenges getting the proper potencies from the National Institute on Drug Abuse, the government’s grower and provider of marijuana for scientific study. The team agreed in April 2015 to accept lower levels to move forward.

Since then, “we’ve spent over a year and a half trying to appease different review boards, which necessitated many protocol amendments and more reviews,” Matthews said. They had to “find a study center in the Phoenix area that was willing to let Dr. Sisley conduct her research there, meet DEA diversion standards to gain clearance to conduct the trial and then finally obtain approval of the request with NIDA.”

Four years into the effort, Sisley said she was fired from her job at the University of Arizona College of Medicine despite years of “excellent” performance evaluations. She believes it was because of the study and her intent to conduct the research. University of Arizona officials declined to discuss Sisley’s case, but said the university supports “academic freedom in research and instruction” and has remained committed to conducting marijuana research.

“There has been tremendous governmental resistance, both subtle and sometimes overt, at all levels of the government — not just federal,” Sisley said.

Sisley says it’s premature to call the study a victory for veterans suffering from PTSD, but it is a potential victory for scientific freedom.

“Once we’ve put it out in the public domain, then there may be a victory if we have uncovered a potential new treatment for PTSD; however, right now we have no idea what the results will be,” she said. “The study may show that cannabis is detrimental for PTSD … If it shows that it has therapeutic benefit, it also may help us focus on certain strains that may be superior. Finally seeing this study get underway after so many years of government stonewalling is truly something to celebrate.”

In addition to easing his PTSD symptoms, marijuana has given Pickering a cause.

He has dedicated his life to it, starting the Battlefield Foundation to combat veteran suicide, speaking about the benefits of cannabis and raising funds. He says cannabis is integral to his plans and mission.

The foundation offers emotional support that follows the sponsorship model popularized by Alcoholics Anonymous, along with health solutions — cannabis for the mind; exercise and diet for the body. He wants to provide economic empowerment through staffing solutions in the cannabis industry.

His vision includes crews of veterans working together for $20 an hour trimming marijuana buds for consumption. They’ll support one another and, through cannabis, support themselves and their families.

They could go even further and start their own profitable company to take advantage of pot’s popularity and the boom that legalization has provided.

“This is medicine, and I want it to be treated as medicine and given to the masses,” Pickering said. “All I can say is, ‘Look at my life then, look at my life now.’ I want to make [cannabis] an option for all veterans, for all people, not just veterans. Sue is trying to give us that definitive scientific argument.”

The research team has a certificate of confidentiality from the Department of Health and Human Services for this study. The Johns Hopkins site is not ready to take recruitment calls, but those interested in participating in the study in the Phoenix area can email arizona@marijuanasites.org.