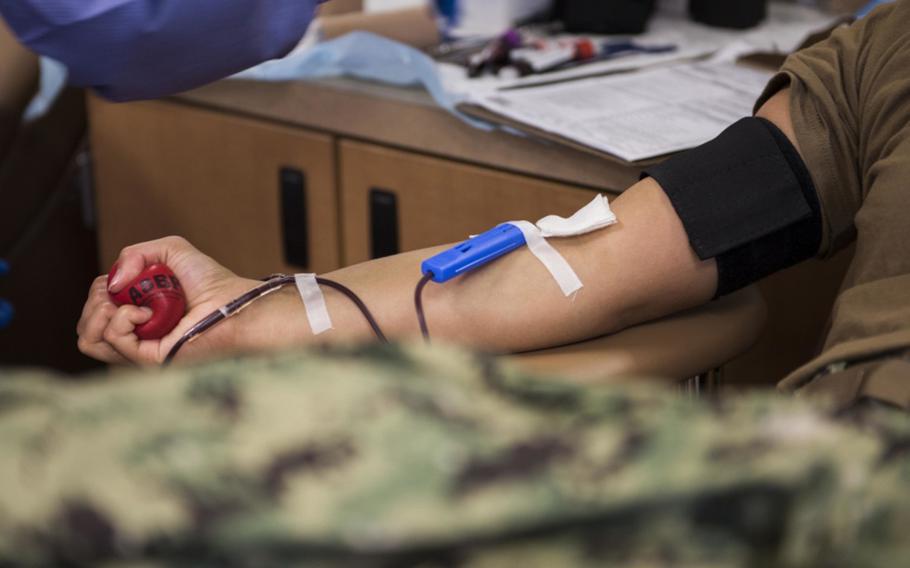 A sailor donates blood during a blood drive on Joint Expeditionary Base Little Creek, Va., on Aug. 29, 2017. (Charles Oki/U.S. Navy )

Gravely injured troops who received blood transfusions during battlefield evacuations were more likely to survive than troops who first received them at a hospital, according to a new study.

The study, led by doctors at the Joint Trauma System at Fort Sam Houston in San Antonio and published this week in the Journal of the American Medical Association, provides the most conclusive data to date in support of what many doctors have said for years: people with severe bleeding should be given blood transfusions right away.

“People who bleed to death die fast,” said Air Force Col. Stacy Shackelford, a trauma surgeon and the study’s lead author. “Getting blood to them as soon as possible is critical to their survival. We found a delay of even a few minutes had a strong effect.”

The study found that 55 troops transfused with red blood cells, plasma or both aboard medevac helicopters in Afghanistan were much more likely to live than the 447 troops not transfused until arriving at a combat hospital.

Bleeding is the No. 1 cause of combat death.

The study reviewed the outcomes of 502 troops evacuated from the battlefield in Afghanistan from 2012 to 2015. Most had been in an explosion; some had been shot. All of them had lost a limb at or above the elbow or knee, or were in shock with extremely low blood pressure, which indicates massive bleeding.

Eighty-five of the 447 troops who did not get a transfusion on their medevac — waiting an average of 30 minutes from the time the helicopter lifted off until arriving at the hospital — died within 24 hours.

“The vast, vast majority died within the first hour,” Shackelford said. “Some of them died before they got to the hospital.”

Seventeen more died within 30 days, the study found, for a 23 percent mortality rate.

But of the 55 troops who were transfused on the helicopter before reaching the hospital, within about seven minutes of takeoff, only three died that day. Three more died within 30 days, for an 11 percent mortality rate.

The study’s researchers matched the injuries by severity and type and controlled for age, injury year, transport team, tourniquet use and time until rescue.

The “golden hour rule” was in effect during the time frame of the study. Initiated in 2009 by then-Defense Secretary Robert Gates, it mandated that critically injured servicemembers arrive at a hospital equipped with surgical capability within an hour from a medevac request. Before that, the rule had been two hours.

The median total evacuation time was 47 minutes for troops in the study.

But even by 2012, medevacs with transfusion capabilities were rare, Shackelford said, used primarily by the British and on some U.S. Air Force flights. That same year, the Army started training its medical teams to provide blood transfusions on medevacs.

Now “all of our medevacs have the capability to transfuse blood,” Shackelford said.

The study suggested that even earlier blood transfusion — at the point of injury — could save more lives.

The study should be a game-changer in trauma care, said Dr. John Holcomb, at the Center for Translational Injury Research at the University of Texas Health Science Center in Houston.

“Because injury is one of the leading causes of death in the U.S., everyone who reads this paper should go to work and push for blood products on their ambulances and helicopters,” said Holcomb, a former Army trauma surgeon. “Just like with tourniquets, waiting until patients reach the hospital is too late.”

Dr. Martin Zielinski, a trauma surgeon and the medical director for research at the Mayo Clinic Adult and Pediatric Trauma Centers in Rochester, Minn., said the study provided strong evidence justifying pre-hospital blood transfusions, though they are costly and present challenging logistics.

“The military continues to be the thought leader of blood transfusion for hemorrhage,” Zielinski said in an email. “I agree with the authors that prehospital blood transfusions are beneficial and should be more widely incorporated, military and civilian alike.”