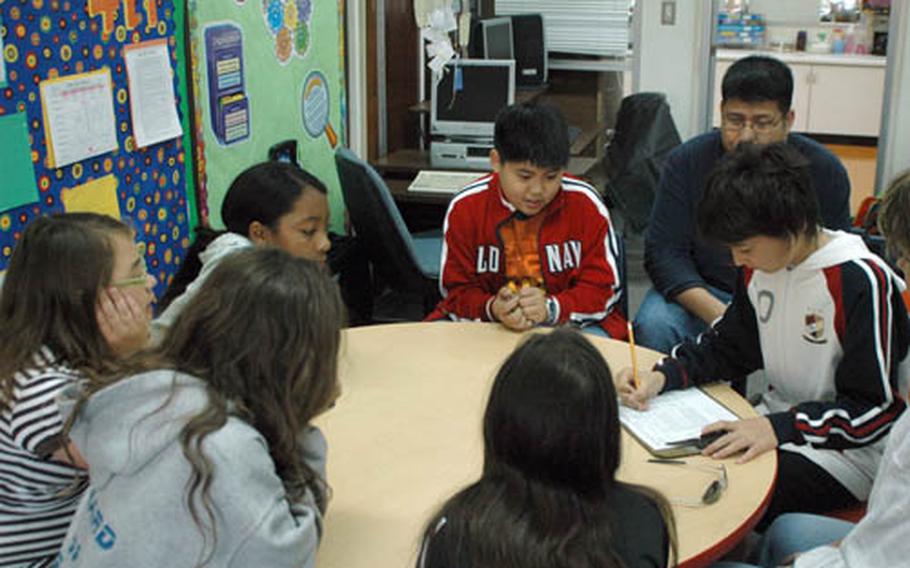 Fifth-graders at Yokota West Elementary School review how they scored a tower&#39;s trash area. The students conducted an inspection of trash areas at eight different towers on the base&#39;s west side. (Bryce S. Dubee / S&S)

Fifth-graders at Yokota West Elementary School review how they scored a tower&#39;s trash area. The students conducted an inspection of trash areas at eight different towers on the base&#39;s west side. (Bryce S. Dubee / S&S) 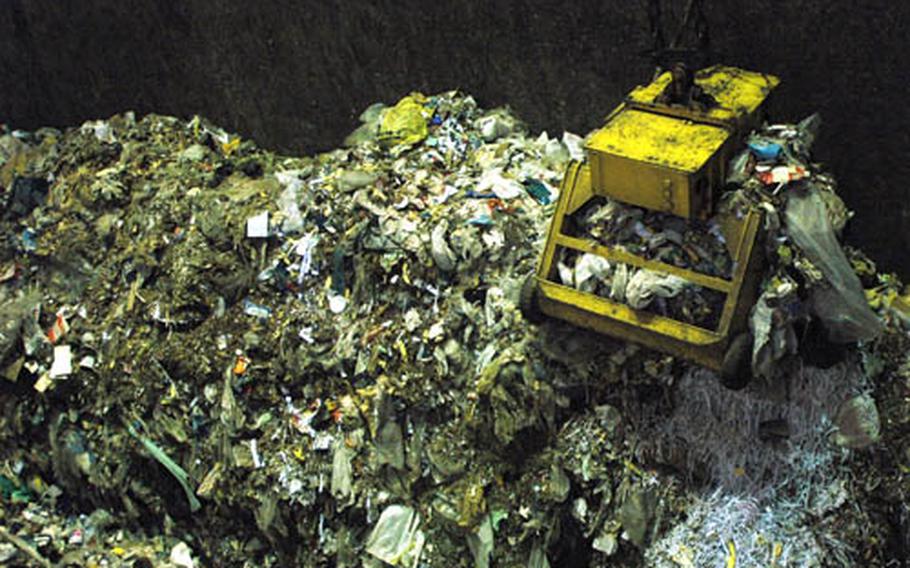 A crane lifts trash into Yokota&#39;s incinerator. The base processes 30 tons of trash every day. (Bryce S. Dubee / S&S) Fifth-graders from Yokota West Elementary School check out blocks of crushed cans at the base Incinerator and Processing Plant. (Bryce S. Dubee / S&S) The students check to see how well base residents sort their trash for recycling. (Bryce S. Dubee / S&S)

YOKOTA AIR BASE, Japan &#8212; Some residents on Yokota&#8217;s west side apparently have learned their lesson when it comes to recycling.

At least if you ask a bunch of fifth-graders.

As part of an Earth Week program to teach students the importance of recycling, the class at Yokota West Elementary School conducted an inspection of the trash collection areas in eight residential towers.

The towers were graded in 14 areas, including the cleanliness of each collection area, how well sorting containers are marked, and if recyclable materials were in any bins for nonrecyclables.

Last school year, Yokota West fifth-graders did a similar inspection and turned up some rather disturbing results. Out of the eight towers inspected, two received a B grade while the rest received a D or F.

The students then presented their results and improvement suggestions to the base environmental unit.

Now, a year later, results of the new inspection show many residents are starting to get the message.

Erwin was among students who inspected Building 3006, which received an F in last year&#8217;s inspection. This year the building rated a C.

She said that while most residents seemed to be doing their part to sort their trash, there are still some slackers.

Conner Mayheu, 11, blamed laziness for why many people choose not to recycle.

Students said that more education is needed to show base residents the importance of recycling. They suggested the base should offer classes about recycling and the environment when people first arrive.

After the inspection, students went to the Recycling and Incinerator Plant, where they learned what happens to trash after it&#8217;s hauled off.

Of the roughly 30 tons of trash taken to the plant each day, about 40 percent of it can be recycled, said Shoko Suto, a pollution prevention manager at Yokota.

She told students that sorting trash at home saves money and manpower, as workers have to spend less time sorting through recyclable items, which the base sells to Japanese recycling companies.

&#8220;We found out that the base has done a good job of making recycling bins available, but families need to follow through,&#8221; said Dana Carey, a fifth-grade science teacher who helped organize this year&#8217;s activities.

He added that the students will again share what they learn during the inspection with the environmental office.

Suggestions Yokota West Elementary School students made to the base to improve recycling:

Base leadership should impose fines for not recycling.Put a sign on every floor of the towers and distribute fliers telling residents to recycle.Put security cameras in the trash areas so people will be more likely to do the right thing.Make televised announcements on AFN about the importance of putting trash in the correct containers.Show pictures of how messy the trash areas can get.Make separate trash chutes for recyclable materials on each floor of the towers.If the residential units are good about recycling, give them some type of reward such as money for building improvements (snack machines, etc.).Brief newcomers to Yokota about the importance of recycling and sorting trash at the Right Start orientation briefing.Visit the incinerator and separation facilities to see just how much extra work and time has to be spent to separate trash that hasn&#8217;t been sorted by residents.Stop being lazy.From staff reports