Students learn about rise of the robots 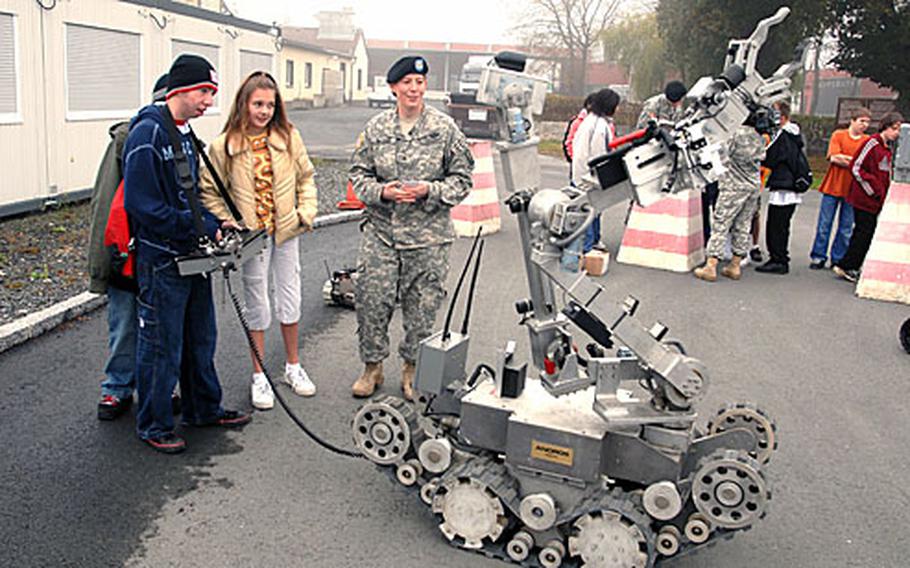 On Wednesday, Stephen and the rest of his class got firsthand experience with military explosive ordnance disposal robots brought to the school by soldiers from the Camp Normandy-based 702nd EOD Detachment.

&#8220;I need to learn the controls, but it won&#8217;t take long,&#8221; Stephen said as he used the remote controls to move a 700-pound RONS (Remote Ordnance Neutralization System) robot around the parking lot behind his school.

Another middle-schooler, Connor Chroman, 13, said he hopes to work for NASA, a job that he expects will require some knowledge of robots.

&#8220;The robots can go prepare a planet for people who can come at a later stage,&#8221; said Connor, who added that the EOD machines were the first working robots he&#8217;d seen.

Sgt. Kristen Butcher, 24, of Redding, Calif., and a member of the 702nd, gave the students a rundown on the EOD robots, which included the almost-obsolete 1991 RONS along with newer PacBot and Talon machines.

The students were full of questions when the soldiers demonstrated the RONS&#8217; capabilities.

What does it run on? (a 24-volt battery that lasts four to five hours)

How does its arm work? (It is powered by electric motors).

Most of the 702nd&#8217;s robots are used to deal with roadside bombs, Butcher said.

The Talon, one of the latest EOD robots, weighs just 100 pounds, making it easy to transport. Its small size makes it ideal for getting into tight spots to deal with the bombs, she said.

&#8220;We can investigate items with the robot instead of having to send a team downrange. In some cases, the robot can complete all the downrange tasks,&#8221; she said.

EOD soldiers often name their robots. Butcher works with a machine she calls Bender, after the &#8220;Futurama&#8221; television character, and she used a robot named Betty to clear roadside bombs in Baghdad for six months in 2006, she said.

During that time, she helped clear about 90 bombs. The most challenging involved a bomb attached to a sign placed into the ground with concrete.

Betty and Butcher&#8217;s other robots came through the Iraq mission unscathed, she said.

&#8220;Some are slow and some are twitchy. You work with them long enough and you know which ones are better for which tasks,&#8221; she said.