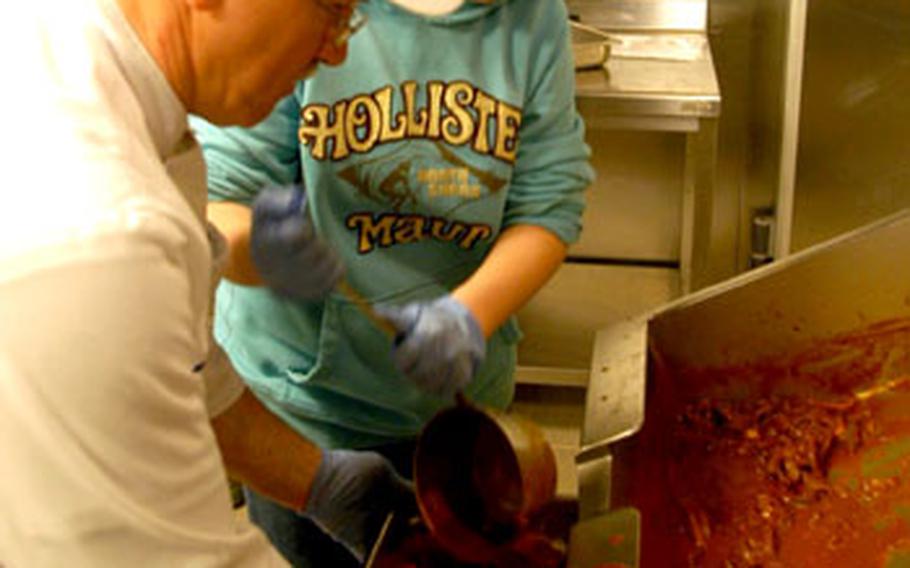 Kylie Fore uses a large ladle to scoop out sauce for pepper steak into a pan held by Lucio Fedrigo. Hundreds of students around Europe participated in a job shadow day Thursday, watching adults perform their jobs. (Kent Harris / S&S)

Kylie Fore uses a large ladle to scoop out sauce for pepper steak into a pan held by Lucio Fedrigo. Hundreds of students around Europe participated in a job shadow day Thursday, watching adults perform their jobs. (Kent Harris / S&S) 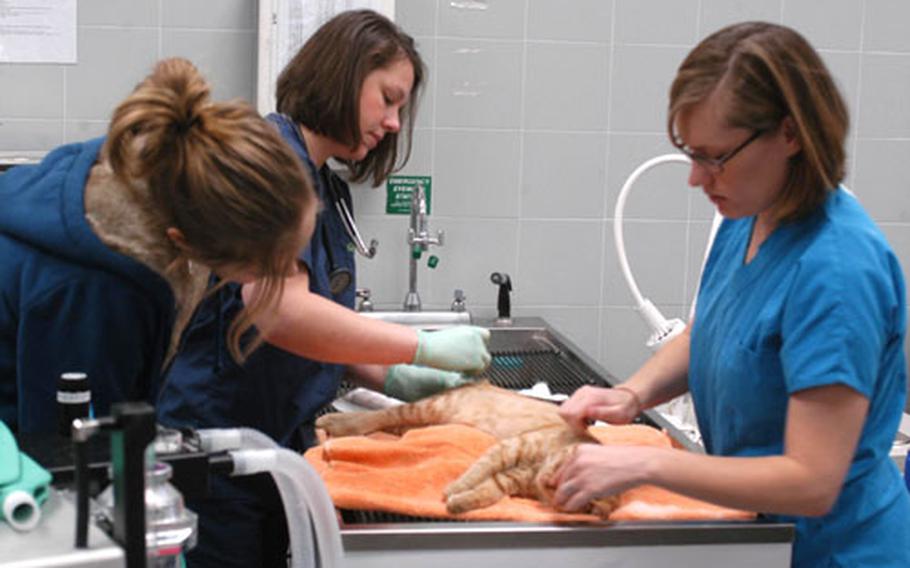 Adrianna Ellam, a seventh-grader at Aviano Middle School, watches Stephanie Craft, center, and Dani Wheeler perform a surgery on Marty McFly the cat during a job shadow day on base. (Kent Harris / S&S)

AVIANO AIR BASE, Italy &#8212; Hundreds of students from military communities around Europe participated in Job Shadow 2009 on Thursday.

In many cases at Aviano Air Base, students even pitched in with the work.

The base&#8217;s military dining facility had five extra hands to help out in the kitchen. And Tech. Sgt. Sonya Braxton, the assistant dining facility manager, said in this case, too many cooks didn&#8217;t spoil the soup.

Fore said she knows that&#8217;s not going to happen, though. And she&#8217;s not really considering a career in the field at this point.

"I want to be a vet when I grow up," she said. It was her third year shadowing someone at the vet clinic. She&#8217;s got two dogs and a turtle of her own in Italy. And more pets at her grandparents&#8217; home in Croatia.

Craft called Ellam&#8217;s assistance "fabulous" and said more students were set to help out at the clinic later in the day.

Job Shadow events have been going on for more than a decade in the States. The Department of Defense Education Activity encouraged its schools to join the effort, and many schools did so on Monday. Since that was the day following the Super Bowl, U.S. Air Forces in Europe decided to participate on Thursday.

"The way the project is set up, Job Shadow Day can occur at any time of the year," said Margret Menzies, public affairs officer for DODDS-Europe.