Students in England explore space with help of radio telescope 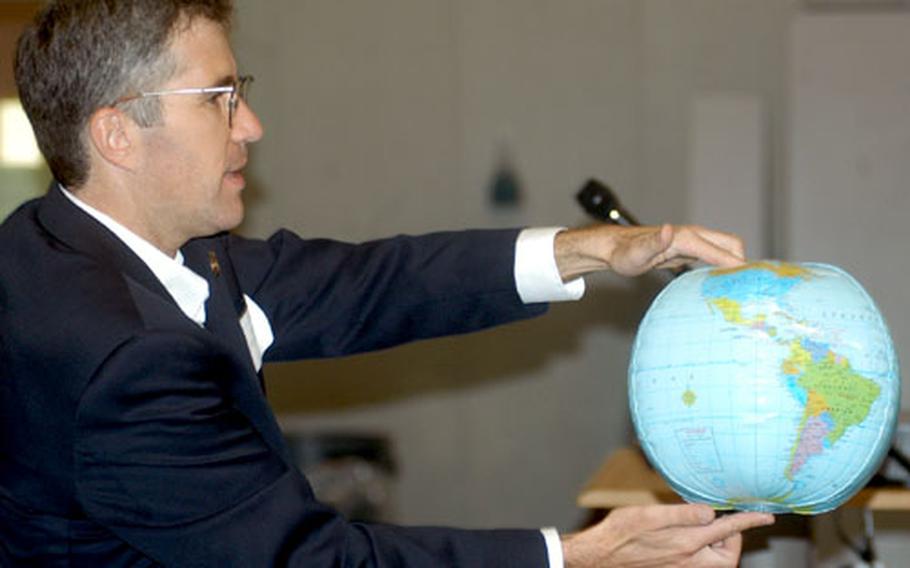 Mark Hofstadter, a scientist with the Jet Propulsion Laboratory at Pasadena, Calif., uses a model of Earth to represent the planet’s orbit Thursday at Lakenheath Middle School at RAF Feltwell, England. He is a representative for a radio telescope program used by schools. (Ron Jensen / S&S)

Mark Hofstadter, a scientist with the Jet Propulsion Laboratory at Pasadena, Calif., uses a model of Earth to represent the planet’s orbit Thursday at Lakenheath Middle School at RAF Feltwell, England. He is a representative for a radio telescope program used by schools. (Ron Jensen / S&S) Pupils at Lakenheath Middle School pass around a beach ball Thursday to represent the long orbit of the planet Uranus around the sun. (Ron Jensen / S&S) 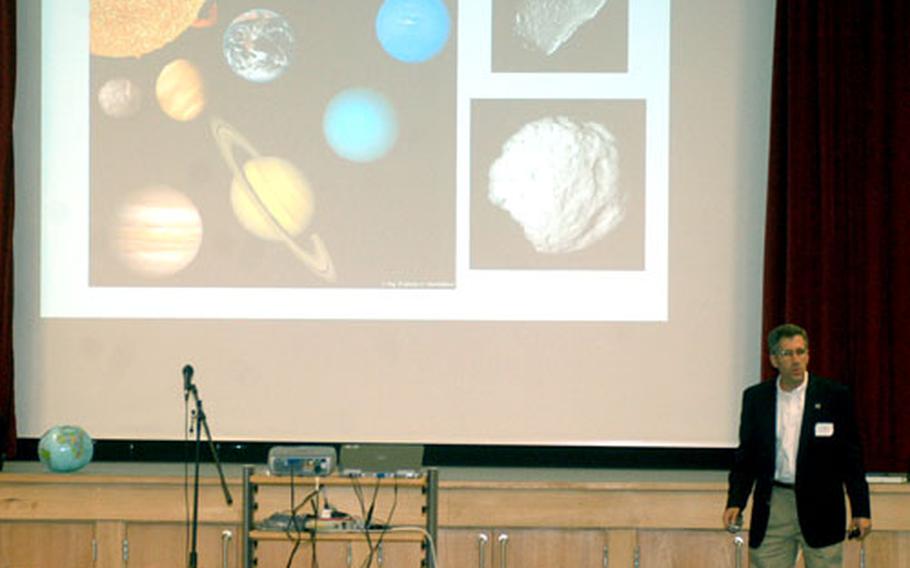 Mark Hofstadter talks to pupils about the solar system during his visit to Lakenheath Middle School. (Ron Jensen / S&S)

Department of Defense Dependents Schools classes in Europe are beginning their second year as part of the Goldstone Apple Valley Radio Telescope program, known as GAVRT.

The program began several years ago when a radio telescope that had been in operation for years was about to be mothballed.

&#8220;Someone had the great idea, &#8216;Why not let students use it,&#8217;&#8221; said Mark Hofstadter, a planetary scientist at the Jet Propulsion Laboratory in Pasadena, Calif., who visited Feltwell pupils on Thursday.

Since then, pupils around the world have been able to reserve time with the telescope and collect any data they wish. Bashant said his pupils last year used four hours of time to gather information on temperatures of various planets.

His pupils have yet to take part in the program this year.

Hofstadter, who is deputy manager of the JPL&#8217;s planetary science and life detection section, is the lab&#8217;s GAVRT representative. While attending a conference at nearby Cambridge University, he offered to talk to pupils, presenting them with a quick summary of the solar system.

&#8220;Through GAVRT, students like you have an opportunity to make measurements that scientists like me can use,&#8221; he told them Thursday morning.

In an interview with Stars and Stripes, he said it is too soon to determine if the data collected through GAVRT have value.

The goal, however, he said, is to get the kids excited about the research.