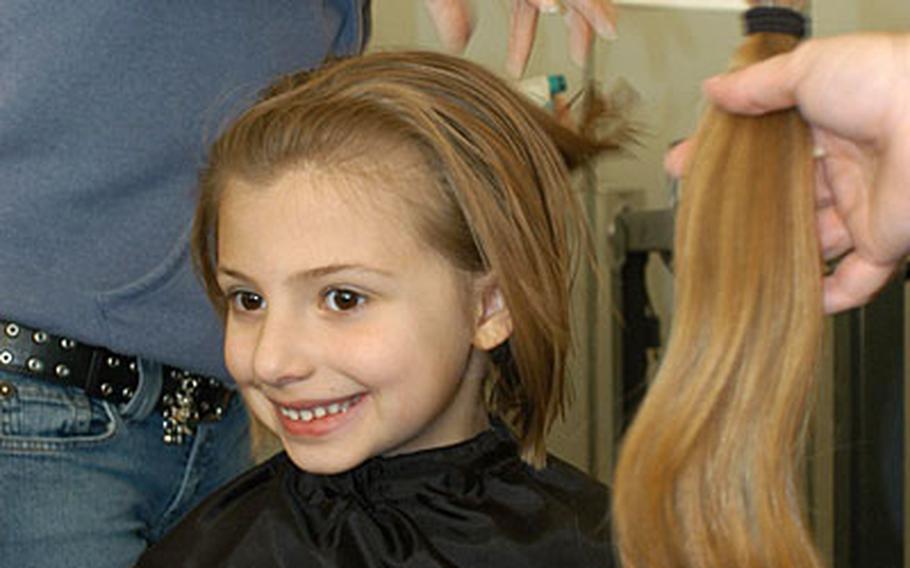 Aviano Elementary School first-grader Sabrina Cooper was one of the first to have her hair cut Friday afternoon in an Aviano schools’ charity event for Locks of Love, a nonprofit group that provides wigs for youths who have lost their hair. (Kent Harris / S&S)

Aviano Elementary School first-grader Sabrina Cooper was one of the first to have her hair cut Friday afternoon in an Aviano schools’ charity event for Locks of Love, a nonprofit group that provides wigs for youths who have lost their hair. (Kent Harris / S&S) 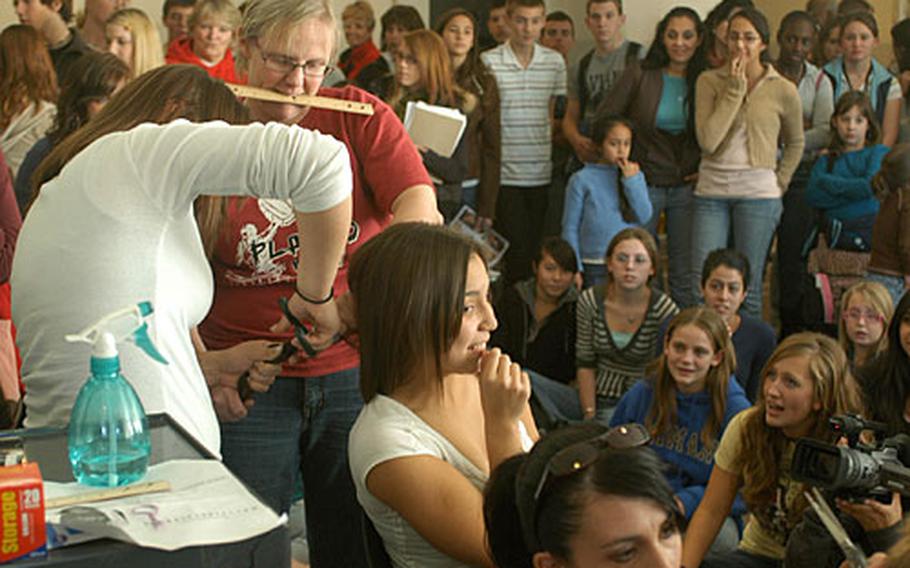 AVIANO AIR BASE, Italy &#8212; Long hair might have been in fashion at Aviano High School, but all that changed Friday afternoon.

With a few snips &#8212; OK, a few hacks and a lot of snips &#8212; and the efforts of a pair of seniors and some enthusiastic volunteers, shorter hair was suddenly in.

Twenty-eight students took turns sitting in a chair in the school&#8217;s main hallway and had 10 inches of hair hacked from their heads. The hair was collected, bagged and will soon be on its way to Locks of Love, a nonprofit organization that provides wigs to children and youths who have lost their hair due to illness.

After having their hair chopped off, each donor received a professional haircut from volunteer stylists Andrea Smith, Bernadette McGregor and Suzanne Couchman to make them look good again.

Dylan Hillestad came up with the idea as a service project for his mother&#8217;s senior English class. Pam Hillestad teaches and coaches at the school, and requires all students in her class to complete such projects before graduating.

Dylan was the first to get snipped. He had organized a raffle at school, with the winner getting the right to cut his hair. His pale, blond locks hadn&#8217;t been cut in about four years.

Some of his fellow students weren&#8217;t as emotionally ready to lose their hair. A few shed tears when they were shown their contributions. But all volunteered to do so, as dozens of friends, teachers and parents cheered them on.

Alex Simon, who joined Dylan to make the effort her senior project as well, managed to hide her anxieties fairly well.

When all the cutting was done, it wasn&#8217;t as though she or the rest of the volunteers were sporting a bald look. Her shoulder-length styled cut would be the envy of many.