Students get back to basics at soroban math competition 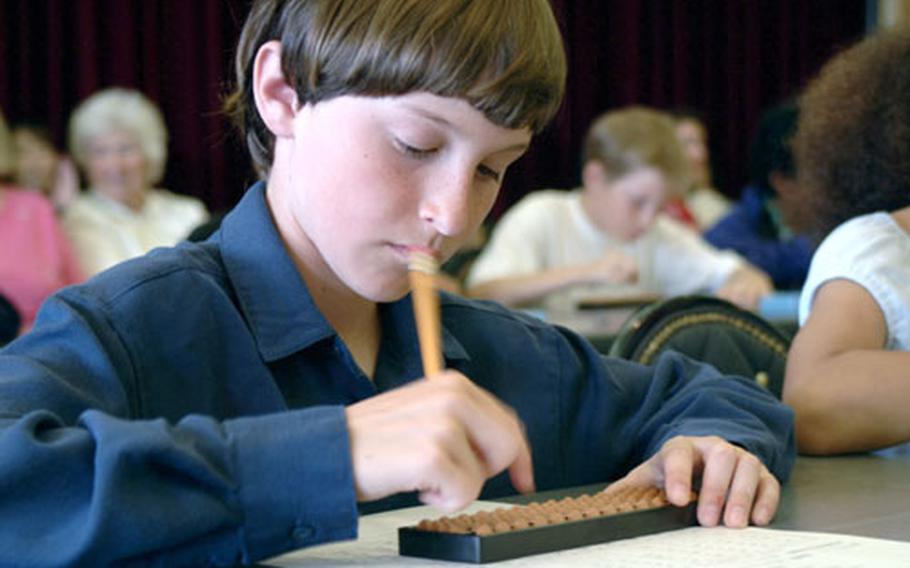 Peter Fargo, a 6th grade pupil at Jack N. Darby Elementary School, works on mitori-zan, or written, soroban at the Soroban Taikai Competition on Wednesday at the Harbor View Club. Soroban is an abacus mathematic method where students compete in how fast they can calculate. For yomiage-zan, somebody reads numbers quickly and students have to calculate the numbers. For mitori-zan, students calculate numbers printed on a piece of paper. (Courtesy of Sasebo Naval Base)

SASEBO NAVAL BASE, Japan &#8212; No beeping, battery-powered gadgets were allowed at a mathematics competition for high school and elementary students held here this week.

Instead, the young whizzes calculated in the competition that measured speed and accuracy using a soroban, or Japanese abacus &#8212; a counting device featuring beads that slide in rows.

&#8220;The three schools introduced soroban into their school curriculums in October to learn more of the Japanese culture and to improve the ability to calculate and concentrate,&#8221; said Karen Nagata, an E.J. King teacher and event organizer.

The contest included addition and subtraction of up to three-digit numbers. Some Sasebo students take part in the Soroban Club every Wednesday at E. J. King in Nagata&#8217;s classroom. Nagata said community volunteers also help teach the skill.

Club members range from third to 11th grade. In addition to learning to move the beads to do computations, students also practice a mental arithmetic called anzan.

&#8220;The abacus is no longer seen as an archaic means of calculation but as a modern means of creative learning,&#8221; states an article on the Singapore-based Soroban Education Centre&#8217;s Web site (www.soroban.com.sg).

&#8220;It may seem like a simple tool; however, as one steps into the world of abacus, one will be surprised to learn the many mathematical wonders it can perform. It could even put a calculator to shame,&#8221; the article notes.

For more information about the Soroban Club, call Nagata at DSN 252-3059.