Students get a look at Roman ruins at Wiesbaden 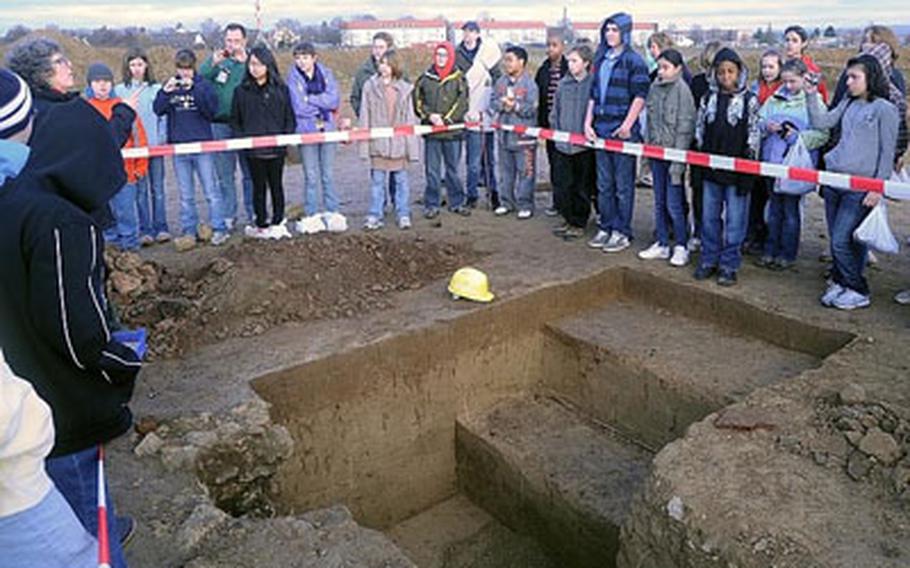 WIESBADEN, Germany &#8212; Schoolchildren got a glimpse of an ancient farming village on Friday before it is paved over to make way for military homes.

The Roman ruins at Wiesbaden Army Airfield are on the site of a planned $133 million Army Corps of Engineers housing project. The village, dating to the 1st or 2nd century, was discovered when digging on the site began earlier this year, and archaeologists have been unearthing treasures such as pottery, roof tiles, and a Roman coin since summer.

Carola Murray-Seegert, a teacher at Frankfurt International School, guided more than 80 children from Wiesbaden Middle School and Aukamm Elementary School through the muddy ruins, explaining the history of the Roman empire in the area and the significance of the finds.

"It was pretty cool to see a Roman ruin, and it was extra cool to see a buried farm from the 1st century," said Wiesbaden Middle School student Jenna Eidem.

The students got their turn at playing archaeologist, imagining what life was like for the Romans. "I would never survive as a Roman," said seventh-grader Cassidy Honish.

Murray-Seegert talked about how Romans had to walk long distances and make do without modern conveniences such as lightweight tents.

"To find out how they walked and tore down the leather tents, I would never do that," said Francisca Benavides, a student.

Murray-Seegert and military officials said they hoped there could be a way to display the relics near the site.

Once they&#8217;re all removed, up to 300 housing units will be built in preparation for the arrival of the U.S. Army Europe headquarters, which is slated to move there from Heidelberg.

The children gazed into what&#8217;s believed to be a cellar that held jars that may have been used to store food. They also saw a well containing the skeleton of a dog. Murray-Seegert said the dog was probably thrown into the well, along with burned rocks, to poison the water supply, leading archaeologists to theorize that the farm was attacked by Germanic tribes around the year 260.

A groundbreaking ceremony was held for the new homes on Tuesday, attended by Wiesbaden lord mayor Helmut M&#252;ller.

At least one visitor on Friday said she was disappointed the housing project would still proceed.

"How can they build housing over this? That&#8217;s terrible," said Jackie Soto, whose son was touring the site. "We have to start a petition."