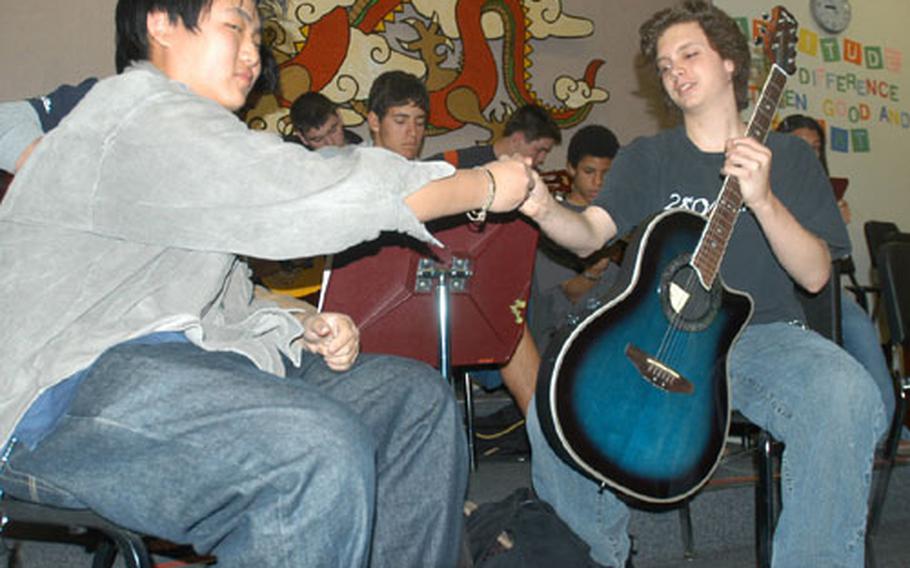 The exchange was the brainstorm of Laurie Clark, who started Seoul American High&#8217;s first German language classes six months ago. Clark said she sent an e-mail to the German School in Seoul &#8212; known as Deutsch Schule &#8212; to see if officials there were interested in having a students visit each other&#8217;s school.

Karin Guther &#8212; an English teacher at the German School &#8212; was interested. While Clark&#8217;s students played host, she said, Guther&#8217;s high-schoolers had assignments: gathering information on how classes are conducted and scheduled compared with German schools.

But there was plenty of fun to go around. L.J. Christie, a 16-year-old sophomore at Seoul American, was paired with 14-year-old Kang Han-sul of the German School. The first class they shared together was teacher Lisa Riehle&#8217;s guitar class. It may have been one of the rare times the students had seen a teacher with a guitar, showing kids how to rock out to power chords.

The students paired with partners and followed them to their regular classes. The high point was Clark&#8217;s 9:30 a.m. German class. The German students already are very proficient speakers of English thanks to Guther&#8217;s instruction.

With 96 students, the German School is quite small compared to the 631-student Seoul American High School, Guther said. Except for foreign-language courses, classes are taught in German.

Since Clark&#8217;s class is fairly new at Seoul American, she said, she uses quite a bit of English to explain grammar, mixing up the 90-minute class periods with videos and other cultural activities.

And the students will get a chance to use some of their German: Thursday, some of Clark&#8217;s students will visit Deutsch Schule.