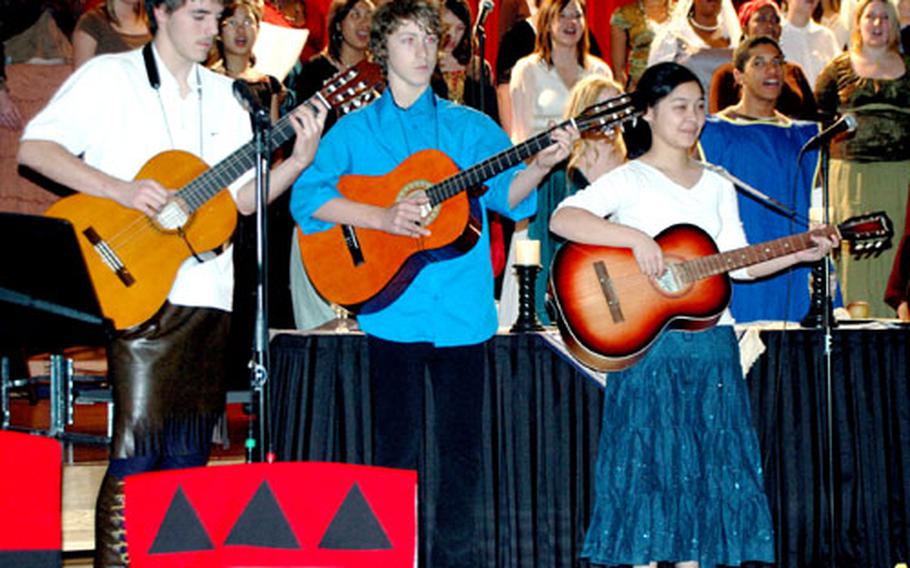 Students from the music program at Ernest J. King High School at Sasebo Naval Base present a dinner theater performance of “A Renaissance Christmas” on Tuesday night for a packed Harbor View Club. (Greg Tyler / S&S)

Approximately 300 diners filled the club, some dressed in period clothing. Everyone attending used their hands to eat a hearty meal of turkey legs, corn on the cob and skewered beef and onions. They drank from goblets and tossed the turkey bones into buckets at the center of each table.

Even before the performances, the Renaissance mood was set by &#8220;merry minstrels&#8221; playing acoustic guitars, who performed in the club&#8217;s lobby while patrons filed in.

Ernest J. King High School Music teacher DeEtte Hassen directed 34 of her students from three classes &#8212; choir, jazz choir and guitar &#8212; in what was a rare dinner theater opportunity at this southern Japan base.

&#8220;I thought the overall effect was really good,&#8221; Hassen said Wednesday. &#8220;I am also pleased because, in music history, they have been studying Renaissance period music, and this gave them a chance to reinforce what they&#8217;ve learned by actually living it.&#8221;

The student choirs sang several period selections, familiar Christmas songs and musical solos, with accompaniment from the guitar-playing minstrels. They also tried out their comedy chops during skits.

After the initial 40-minute dinner performance, the show was repeated for a dessert crowd.

&#8220;I was just amazed to learn how much talent we have here in high school in Sasebo,&#8221; said Connie Weiss, who attended with her family &#8220;just because it&#8217;s Christmas, they were having this and it sounded like a nice holiday event.