Students discover it's easy being green on Earth Day 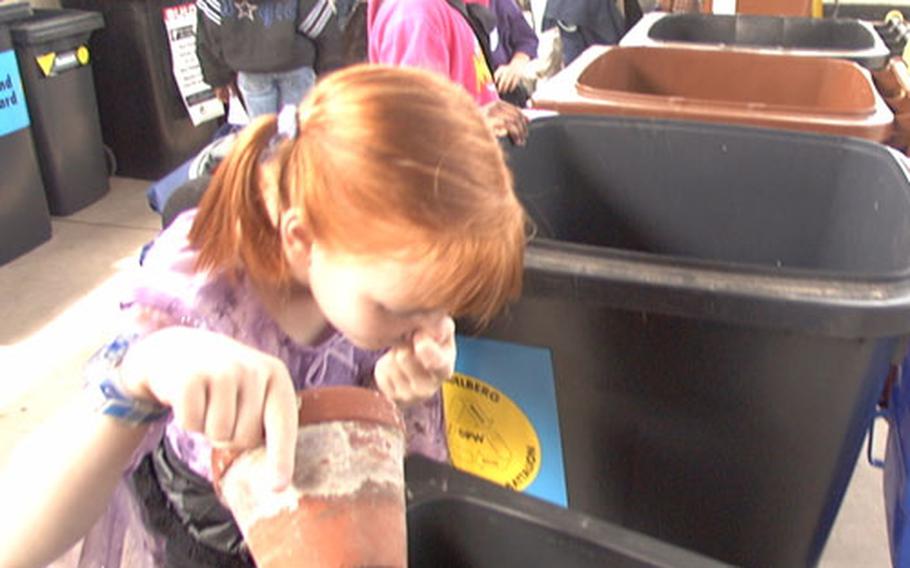 The apple cores and tree branches also posed no problem for Will, who identified them as garden waste. But then he came across that &#8220;white, fuzzy stuff like cardboard,&#8221; as he called it, pointing out a chunk of Styrofoam.

Will and his classmates were among the 175 third-graders from Patrick Henry Village Elementary School who visited the housing area&#8217;s recycling center Tuesday.

They were also among the Department of Defense Dependents School students across Europe who took part in Earth Day activities that ranged from poster contests to planting trees.

Heidelberg classmate Marcel Simon prepared for the field trip to the recycling center by going first to the Internet. He found tons of pictures and information, he said.

He got the gist of things.

In 1970, then-Sen. Gaylord Nelson, a Democrat from Wisconsin, founded Earth Day as a chance for Americans to take part in nationwide grass-roots demonstration on behalf of the environment. In the years since, the annual event has given educators a chance to influence young minds about Earth-friendly habits.

In past years, Heidelberg students visited a local nature preservation, said Astrid Blades, an environmental protection specialist from the 411th Base Support Battalion. This year, force protection measures prevented it.

After sorting recyclables, the children decorated flowerpots and planted sunflowers seeds. Students carried away their own ideas how planting flowers helps.

Meanwhile, students as several other schools held their own Earth Day activities:

&#8226; Bitburg High School students wrapped up a three-week schoolyard beautification project where they planted 75 trees and bushes. At the elementary school, students pretended to be the Earth and wrote letters telling people how to better treat the planet. They also took trips to nearby woods and kept a journal on how the marigolds they planted are growing.

&#8226; Students at Spangdahlem and Ramstein designed paper bags that will be reused at the commissary. On Friday, Spangdahlem Elementary will hold an environmental fair with several earth-friendly displays.

&#8226; At Aukamm Elementary in Wiesbaden, students planted a beech tree in honor of James O&#8217;Donnell, a supply assistant who died in January.

&#8226; At La Maddalena, Italy, students dedicated a nature trail and planted vegetation around the school.

&#8226; As part of their science curriculum, students at Lakenheath High School in England regularly recycle white paper. Elementary students in Lakenheath are holding a can-collection contest that wraps up with a weigh-in Friday morning. The class with the most cans wins a prize.

&#8226; At Argonner Elementary in Hanau, students produced a play about the environment.

In Mannheim, the public works department sponsored a poster contest under the Army&#8217;s Earth Week theme of &#8220;Preserving the Environment While Protecting Our Freedom.&#8221;