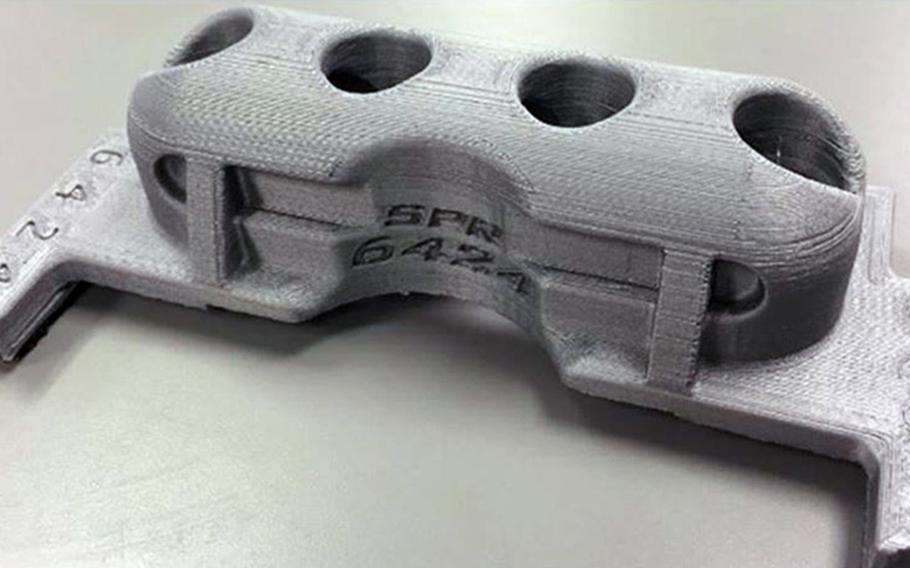 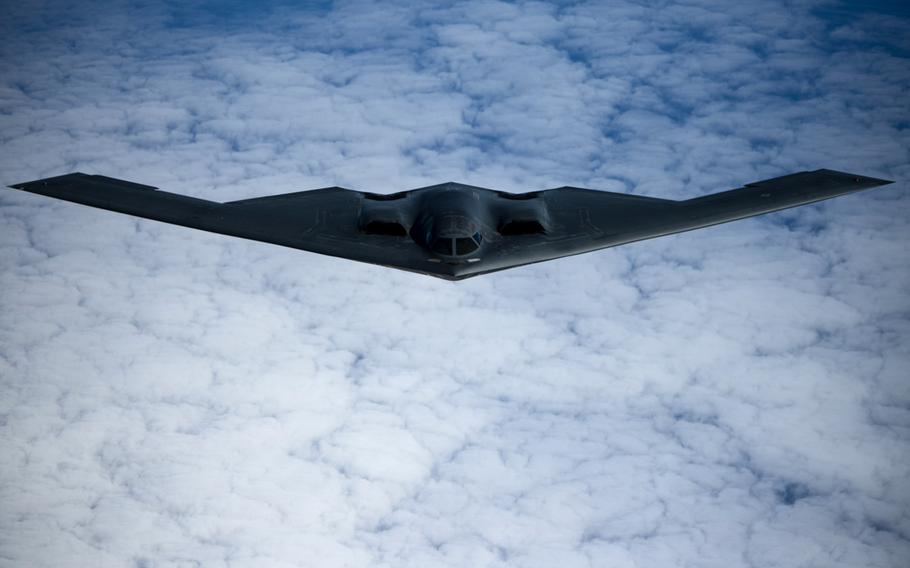 A B-2 Spirit bomber deployed from Whiteman Air Force Base, Missouri, conducts aerial refueling near Joint Base Pearl Harbor-Hickam, Hawaii, during a training mission Jan. 15, 2019. Students from Knob Noster High School near the base designed a plastic cover for an important switch box inside the B-2 Spirit bomber. The cover now is used in all operational B-2s at Whiteman as well as the aircraft's simulators. (Russ Scalf/U.S. Air Force)

One of the world’s most advanced bombers is flying with a plastic switch cover, designed by Missouri high school students, in its cockpit to prevent possible in-flight emergencies, the Air Force says.

The Stealth Panthers robotics team at Knob Noster High School near Whiteman Air Force Base worked with pilots and engineers last fall to create and test the 3D-printed prototype in a B-2 Spirit training simulator.

The covers, which cost about $1.25 to produce, are now installed in each operational B-2 at Whiteman and the simulator cockpits, said Capt. Keenan Kunst, a base spokesman.

“The B-2 Spirit cockpit is equipped with state-of-the-art, cutting-edge technology, but is a very cramped space, so something was needed to keep the pilots or other items from bumping into the switches,” Kunst said. “The students were able to help us find a solution that was quick, affordable and effective.”

The Air Force sought the partnership after one of Whiteman’s B-2s made an emergency landing Oct. 23 in Colorado Springs, Colo.

The landing was due to the inadvertent flip of a switch combined with multiple rare malfunctions, Kunst said in an email to Stars and Stripes. Both pilots and the aircraft were unharmed.

The box with four switches is part of the Airframe Mounted Accessory Drive, a panel next to the pilot’s knee installed as an upgrade, he said.

The switches decouple certain components in the four-engine B-2. The switches could be used to maintain thrust in a situation that would typically call for an engine shutdown, Kunst said.

The pilots can flip the switches “to essentially turn off the generator and hydraulics but keep the engine on,” while maintaining a safe altitude, Kunst said.

Though the switches aren’t particularly easy to flip, “the consequences could be catastrophic — especially if all four were flipped, in which case, ejection would be the only option,” Kunst said.

The base worked in partnership with the Knob Noster robotics team, which the school said has done well at world competitions, to come up with a solution.

“We recognized the switch posed a certain risk of inadvertent actuation and that we should take action to minimize this risk — no matter how small,” Kunst said.

Kunst said base leaders have a good relationship with the school and some pilots had been mentoring robotics team members on other projects. As a result of that partnership, Brig. Gen. John Nichols, the 509th Bomb Wing commander, was curious if the students could come up with a solution for a switch cover, he said.

Though confident they could do it, Kunst said base officials were surprised at how quickly and efficiently the students produced something.

“Seventy-two hours after the initial design concept, the robotics team 3-D printed a cover for four important switches in the $2.2 billion aircraft,” Nichols said in a base statement.

Nichols commended the teenagers for their work at a ceremony in December at Whiteman, during which it was announced the school district was the recipient of a $2.25 million grant for robotics and STEM programs from the Department of Defense Education Activity. About two-thirds of the district’s 1,600 students are connected to Whiteman, officials said.

Chris Adams, the robotics team coach and a Knob Noster teacher, said the students were able to form, fit and test the switch cover in the B-2 simulators with feedback from more than a dozen pilots, according to a school district statement.

The plastic cover attaches to the switch panel with Velcro and protects the switches from being accidentally flipped, base officials said. Each cover is marked with a control number; pilots are assigned one when they step into the aircraft and return it at the end of the mission.

The team has printed more than 30 covers, the school district said. The robotics students said they welcomed the challenge of the task.

“There’s always that kind of ‘oh no.’ That’s a lot of pressure, but I was really happy to know I would have a hand in something that would affect something much larger than me and my town,” junior Gabe Gish said in a television interview with WDAF Fox 4 Kansas City.