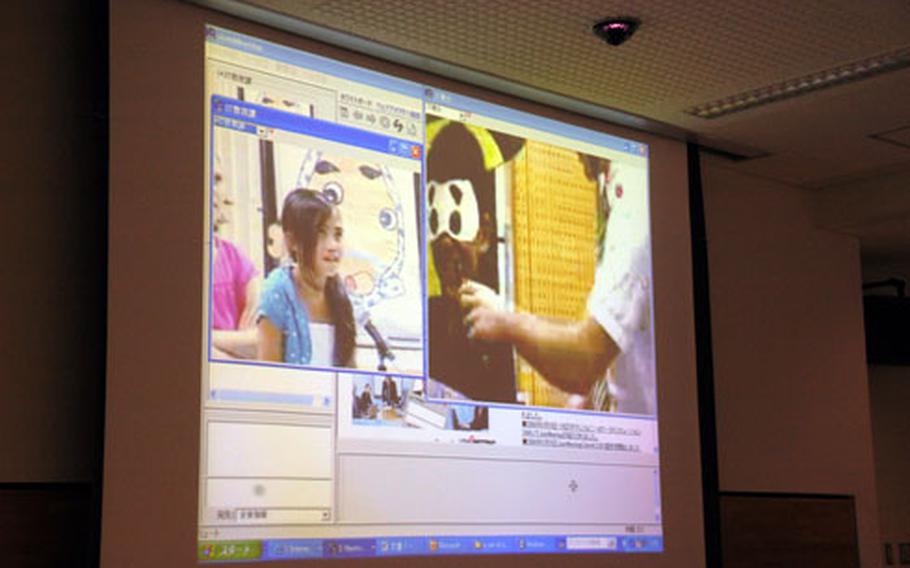 On the screen, 10-year-old Darryl Torres, a fifth-grader at Kadena Elementary School, guides a student from Shimoji Elementary School on Japan’s Miyako Island through a game of fukuwarai on Tuesday. The two classrooms participated in a video teleconference from both the Okinawa Prefectural Comprehensive Education Center in Okinawa City and Miyako Island. (Photo by Natasha Lee/S&S)

Sitting in front of a microphone and video camera Tuesday, Colin Craig, 11, introduced himself to a group of his Japanese peers who were 180 miles away.

Inside a classroom on Miyako Island, the eager faces from Shimoji Elementary School &#8212; displayed on a large screen &#8212; giggled and waved back at Colin, a fifth-grader from Kadena Elementary School.

The exchange was a detour from the usual meet-and-greet between Okinawan students and those from Department of Defense Dependents Schools.

Since a trip from Miyako Island to Kadena Air Base would involve a flight, a video teleconference was set up for the two classrooms at the Okinawa Prefectural Comprehensive Education Center in Okinawa City.

The DODDS fifth-graders are in a Japanese Partial Immersion class that includes Japanese language and culture, so the encounter gave them a chance to sharpen conversation skills.

Speaking in Japanese, Colin said he liked fishing and soccer. In English the Japanese youngsters replied that they did, too.

During the hourlong call, students sang songs, talked about their schools and played a game of fukuwarai, a Japanese version of "pin the tail on the donkey."

About 18 fifth-graders from teacher Seth Renquist&#8217;s class participated in the conference.

Alyssa Saguin, 10, said swapping details showed how much the students have in common.

Tadashi Yokoda, who coordinated the conference, said the education center has been using the software for the past two years to teach curriculum to Japanese students in remote locations.

But Tuesday&#8217;s conference was a special treat for Shimoji students.

"They were very excited," he said. "They are learning English and they get a chance to use it."