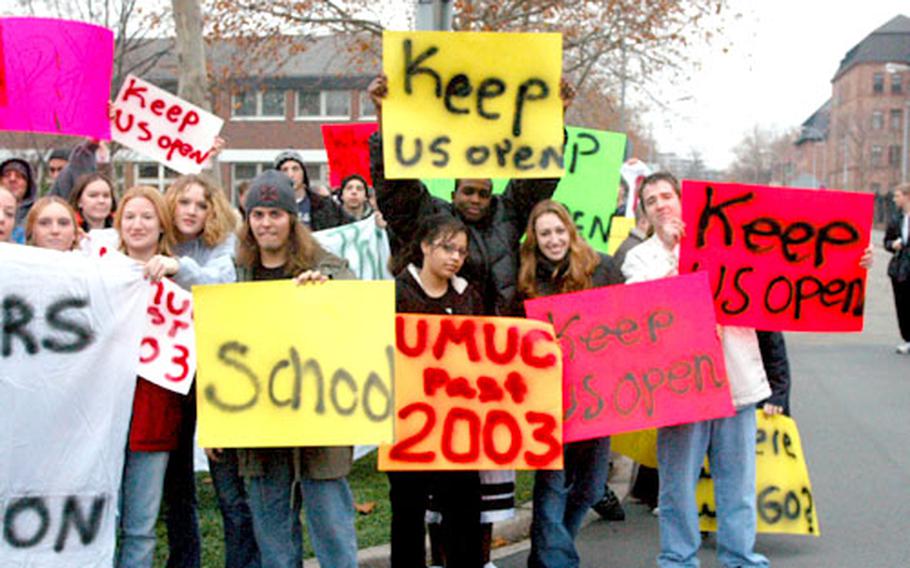 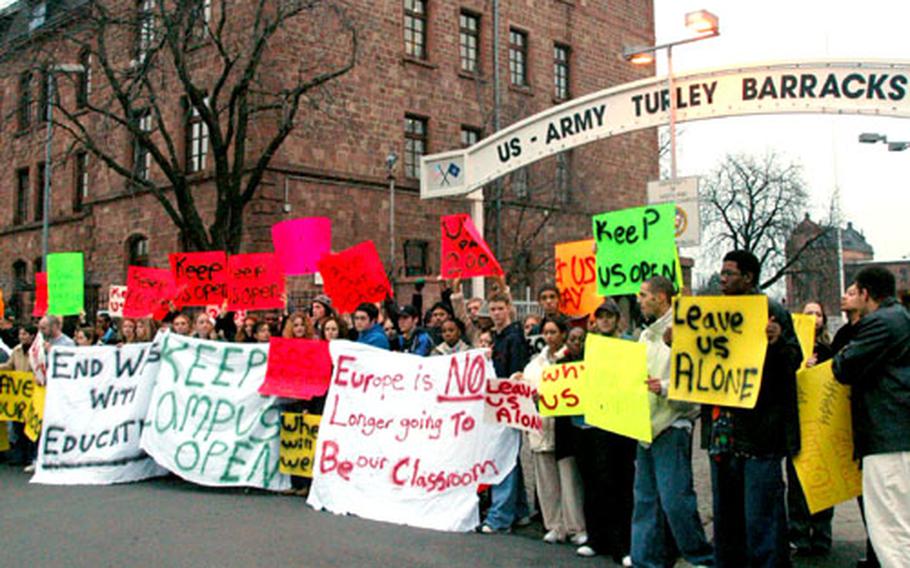 University of Maryland students block the gates to Mannheim&#39;s Turley Barracks on Friday in hopes that their campus might remain open. School officials now say the school will close following the spring 2005 semester, one year later than planned. (Rick Scavetta / S&S)

MANNHEIM, Germany &#8212; University of Maryland University College officials have reconsidered closing the campus on Turley Barracks, but not to the students&#8217; satisfaction.

Initial plans would have closed the university&#8217;s campus in six months.

Last week, during a large protest held outside the campus, some students questioned why the military and the university could not agree that the school is still a much-needed part of the overseas American community.

Ken Butler, 21, whose father, Sgt. 1st Class Albert Butler, is with the 1st Armored Division in Iraq, chose to attend classes in Mannheim and remain close to his family during the war.

The university, which began more than 50 years ago on McGraw Casern in Munich, has pulled up stakes twice in the past 11 years. McGraw closed in 1992 and the campus moved to Augsburg&#8217;s Reese Casern, which closed two years later, forcing the school to relocate to Mannheim.

Now, the university offers two-year programs, mostly to support a student body of military family members in Europe. Classes range from general education to class studies in Amsterdam and London. There are currently 159 full-time students.

Declining enrollments over the past few years &#8212; a result of fewer family members in Europe &#8212; caused university officials to run the numbers, Freeman said.

The decision to close came last spring while U.S. troops in Europe were heading to war in Iraq, leaving thousands of families behind on bases in Germany. The school, in conjunction with the Army, reconsidered the closure based on that reason, Freeman said.

In October, university officials proposed keeping classes going until the end of the spring semester 2005.

Department of Education rules forbid a university to enroll students who cannot finish their program by the time the school closes, Freeman said.

The student body was upset when the university told them of the year extension, he said.

&#8220;The students were outraged,&#8221; Butler said, adding that next semester students plan to continue weekly protests until their voices are heard.

The university has little chance of boosting its enrollment, a fact students feel kills any opportunity for the university to consider keeping the campus open.

Regardless, the university intends to close the campus and no further review is planned, Freeman said.

Recent closure information has lead some to believe the university is ending all its classes on military bases, which Freeman said is not true. In fact, the university was recently awarded a new contract for the part-time classes offered to soldiers on bases.