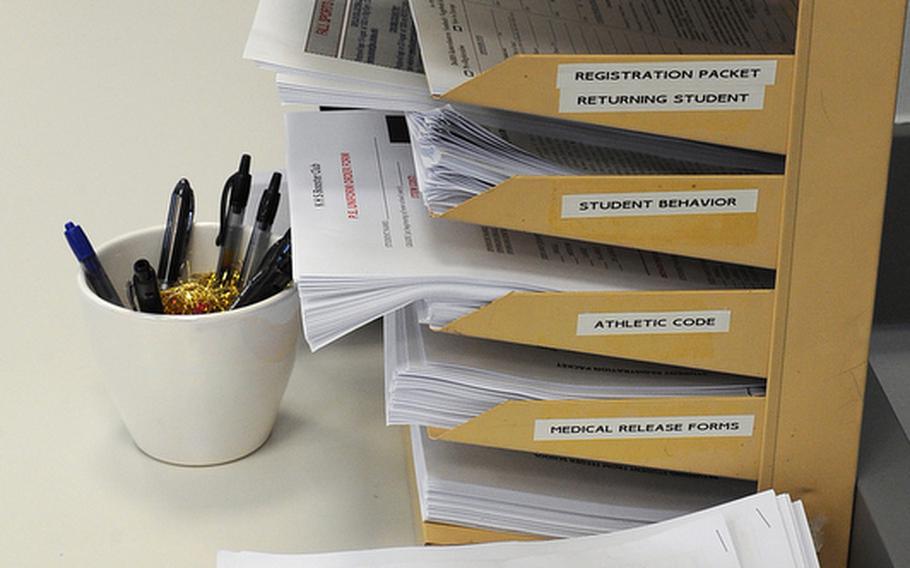 Buy Photo
Various forms for students to fill out sit in the registrar&#39;s office at Kaiserslautern High School. The 2012-13 DODDS-Europe school year gets under way for most students on Monday. (Michael Abrams/Stars and Stripes)

Buy Photo
Various forms for students to fill out sit in the registrar&#39;s office at Kaiserslautern High School. The 2012-13 DODDS-Europe school year gets under way for most students on Monday. (Michael Abrams/Stars and Stripes) 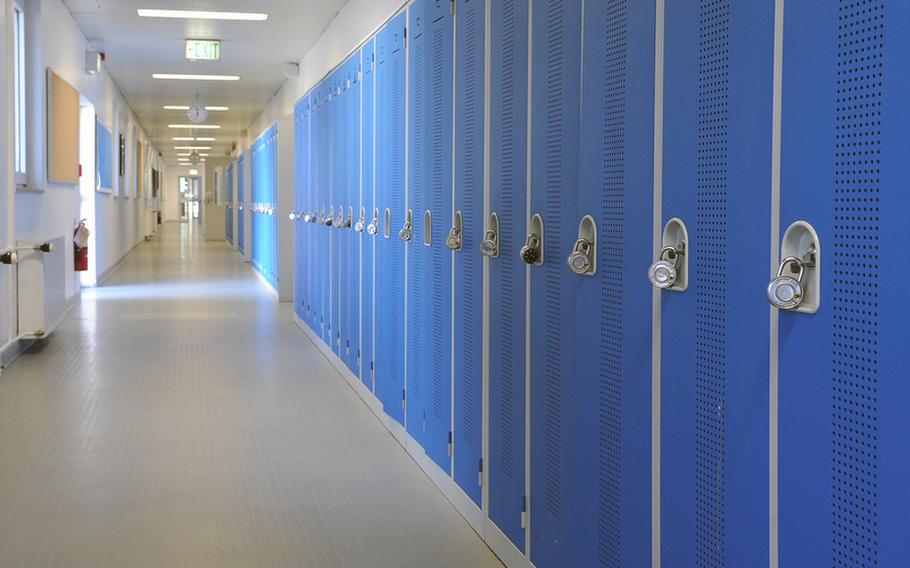 Buy Photo
The hallways of Kaiserslautern High School are virtually empty now, but will be full of life when the new school year gets under way Monday. (Michael Abrams/Stars and Stripes) 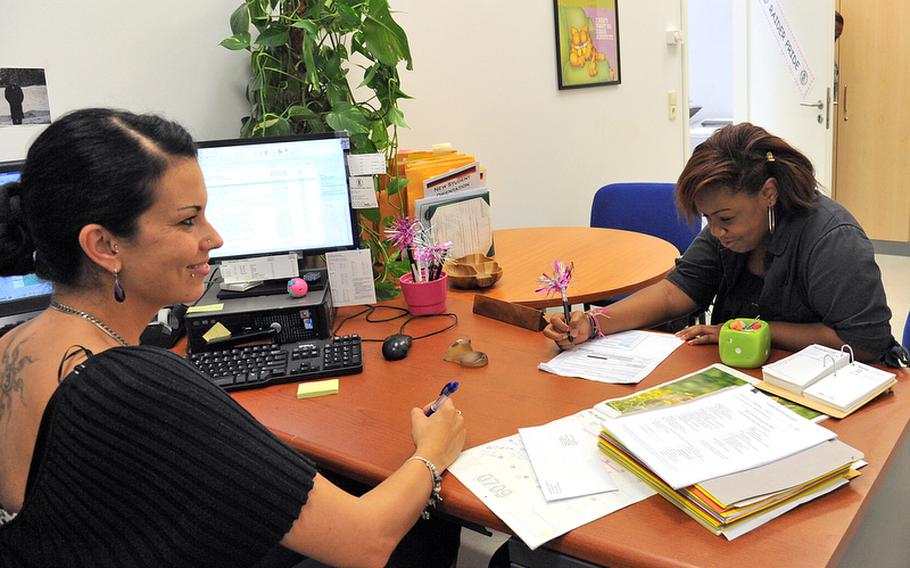 Buy Photo
Bria Gregory, right, who will be a senior at Kaiserslautern High School when the school year gets under way Monday, talks to school registrar Cynthia Moore after filling out registation forms Wednesday. (Michael Abrams/Stars and Stripes) 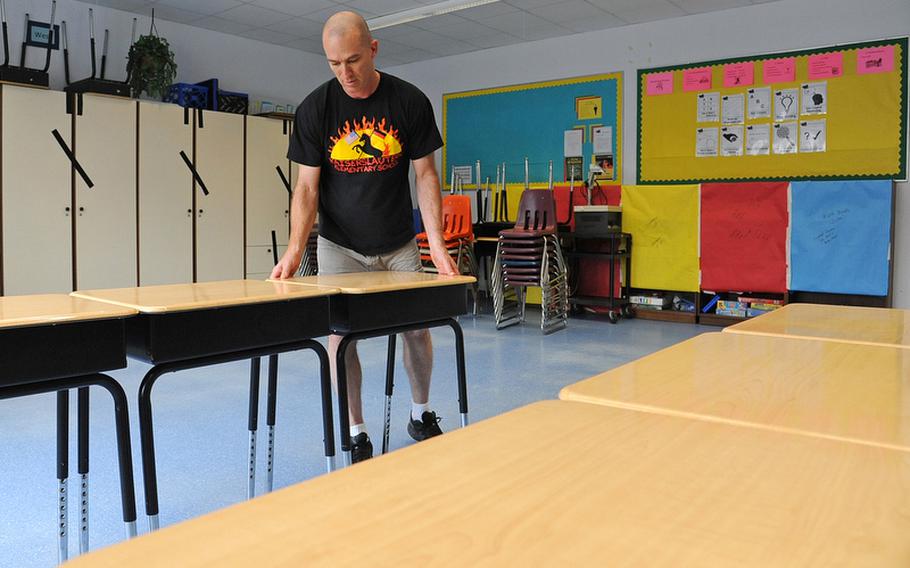 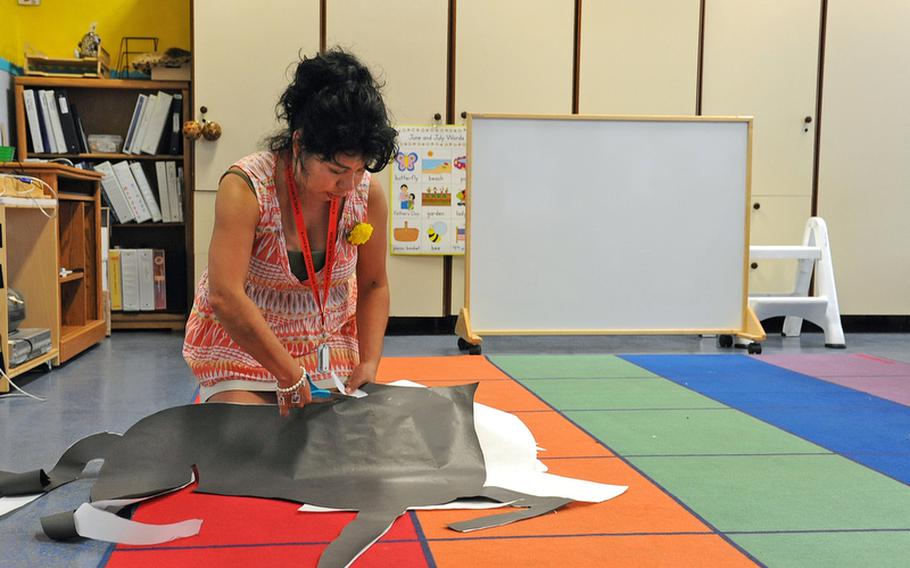 Buy Photo
Kaiserslautern kindergarden teacher Linda Rocha-Mendoza cuts out a mustang, the Kaiserslautern Elementary School&#39;s mascot, as she prepares for the new school year. Unlike students in grades 1-12 who start school Monday, the kindergartners do not start until Sept. 4. (Michael Abrams/Stars and Stripes) 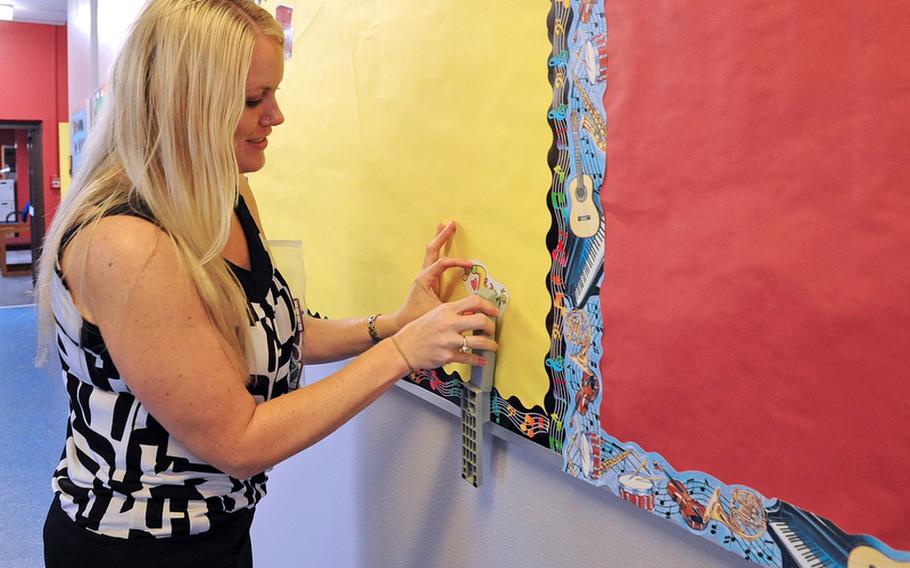 Buy Photo
Kaiserslautern Elementary School music teacher Angela Shoff decorates the bulletin board outside the music room as she prepares for the new school year that begins Monday. (Michael Abrams/Stars and Stripes) 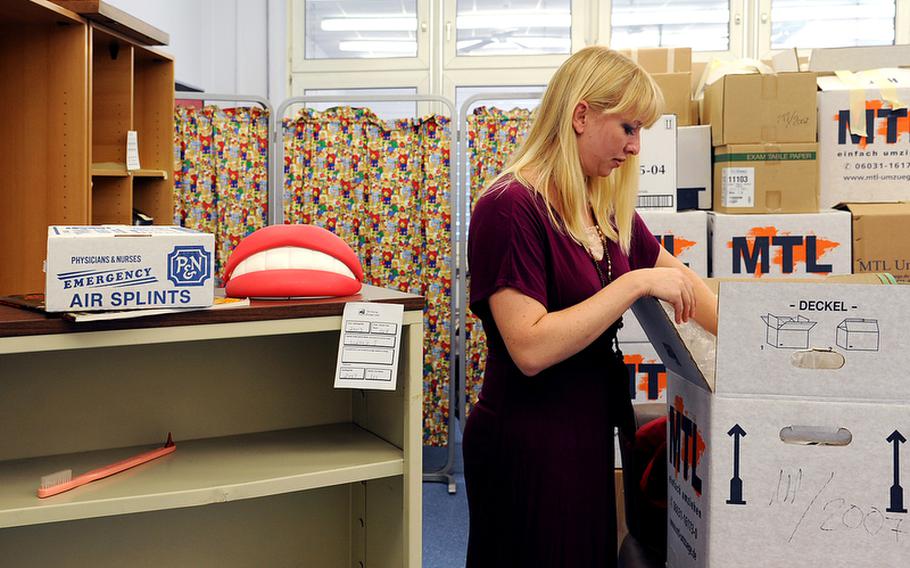 KAISERSLAUTERN, Germany &mdash; Whether aspiring to a career in aerospace engineering or fashion design, this year&rsquo;s incoming freshmen in DODEA schools will have to earn more math credits to get a diploma.

When they start school Monday, most of the more than 86,000 students at 194 military schools worldwide will see better Internet access in schools and more technology in the classroom, from individual-issued laptops for students at some Pacific schools to special education tablets in Europe to additional virtual classes.

At many places, students also will see a change in school leadership, with new principals at 25 schools in Europe and 16 in the Pacific. Many of the staffing changes are due to reassignments or promotions within Department of Defense Education Activity, officials said.

DODEA is introducing four new high school math courses with a focus on algebraic concepts and applications. One, Algebraic Modeling, is a yearlong course and will be offered at all DODEA high schools. Schools have the option to add the other three new math classes within the next three years, said Diane Bishop, DODEA math coordinator. The other courses are Advanced Functions, also a full-year course, as well as Engineering Applications and Financial Literacy, both semester-long courses.

In the future, the four courses could be offered virtually at some schools, Bishop said.

&ldquo;These math courses show the application to the real world,&rdquo; said Faye Batey, instructional system specialist for career and technical education for DODDS-Europe. &ldquo;It&rsquo;s not learning algebra for the sake of learning algebra.&rdquo;

Students in Algebraic Modeling might, for example, be asked to interpret the key characteristics of a linear equation in the context of a real-world problem, according to DODEA standards for the course.

Bishop said the course is intended to help students who struggle with algebra by giving them more hands-on experience with mathematics.

The emphasis on high school math comes as DODEA looks to better prepare its students for college math and the workforce in a technological age where skills in math are increasingly essential.

Currently, about 60 percent of DODEA seniors do not enroll in a math course, Bishop said.

&ldquo;That is what has driven three of the credits needing to be taken at the high school level,&rdquo; she said. &ldquo;If students don&rsquo;t take math their junior or senior year, then they generally struggle in mathematics in college.&rdquo;

A report published in March by the Education Commission of the States notes that 12 states plus the District of Columbia require four math units for graduation, a number that increases to 18 states for the Class of 2020.

U.S. students continue to perform poorly on standardized math tests compared with many of their foreign peers. DODEA students are no different, and on some tests they&rsquo;ve scored even below their national counterparts. DODEA seniors in 2011, for example, scored 19 points below the national average on the math portion of the SAT, a standardized test weighed in the admissions process by many stateside colleges and universities.

&ldquo;DODEA&rsquo;s concerned about this, but so is the nation,&rdquo; Bishop said, citing President Barack Obama&rsquo;s STEM initiative, aimed at improving education in science, technology, engineering and math and making American students more competitive in the worldwide job market.

Another change that DODEA hopes to finish by the end of the school year is an overhaul of its graduation requirements, which haven&rsquo;t been updated since 2004.

&ldquo;The revised regulation will address national trends in rigorous secondary education and prepare our students for success in post-secondary life in the 21st century,&rdquo; DODEA Director Marilee Fitzgerald says in a statement posted on DODEA&rsquo;s website.

The new regulations, among other changes, will better define the process for granting waivers to students to graduate without meeting all requirements, said Faatimah Muhammad, DODEA coordinator for the Advancement via Individual Determination , the Gifted and the Advanced Placement programs.

That issue was identified as a problem during an investigation that began in late 2010 at Ansbach Middle/High School in Germany, where numerous errors on student transcripts were found and dozens of students who didn&rsquo;t meet requirements were allowed to graduate without documentation of a formal waiver.

The new regulation could also increase the number of credits students need to graduate, but Muhammad said that requirement is under review.

Students in the European and Pacific theaters should notice improved Internet access this year. Plans call for outfitting most, if not all, schools with wireless Internet by this fall, school officials said. In Europe, that wireless connection will be high-speed, increasing &ldquo;from 10 to 100 megabytes per second in our schools,&rdquo; said Russ Claus, DODDS-Europe acting deputy director.

&ldquo;We&rsquo;re not to the point yet where students can bring their own device and hook into the Internet,&rdquo; but the schools are moving in that direction, he said.

Students at the eight Europe schools that were part of DODEA&rsquo;s pilot &ldquo;one-to-one&rdquo; laptop initiative last spring will be issued laptops again this school year, Claus said, but the program won&rsquo;t be expanded this year in Europe.

Other initiatives using technology include issuing about 50 portable tablets to three schools in Europe for special education purposes. Students with autism, hearing impairments, learning disabilities and other special needs will use the devices to augment and enhance their communication and other skills in the classroom, Claus said.

Schools in Europe and the Pacific plan to expand their course offerings through video teleconference machines, which allow students to take classes remotely, officials said. In Europe, some high schools will offer advanced placement courses in calculus, statistics, government and history through a video teleconference link with another school, Claus said. In the Pacific, students at schools in Japan and Guam will get to take an advanced music course remotely that is being taught at Kadena High School on Okinawa, school officials said.

Stars and Stripes reporters Travis Tritten and Mark Patton contributed to this report.