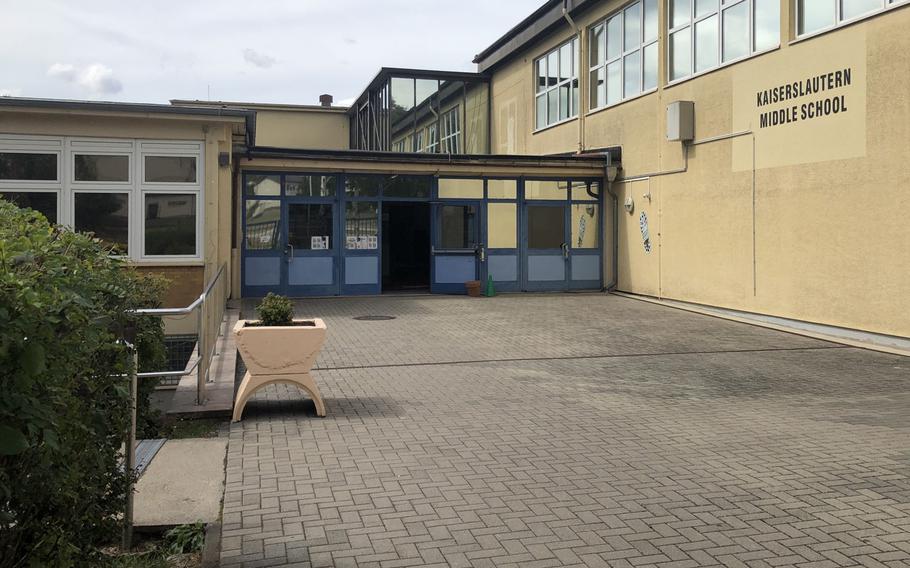 KAISERSLAUTERN, Germany — Kaiserslautern Middle School was closed Friday after a student there became the first at a Defense Department school in Europe to test positive for the coronavirus in the new school year, officials said.

School officials learned Thursday “that a member of our Kaiserslautern Middle School family has tested positive for COVID-19” and closed the school “to allow for thorough cleaning and disinfecting in accordance with guidance from installation command,” principal Susan Paul told parents in an email, which was shared with Stars and Stripes.

The positive test came four days after the start of the new school year, when thousands of students at DODEA-Europe schools opted for in-person classes.

It was the first confirmed coronavirus case at a DODEA-Europe school this fall, said Department of Defense Education Activity-Europe spokesman Stephen Smith.

Several DODEA schools in the U.S. have reported positive tests for the virus among students, including Quantico Middle High School in Virginia, which closed earlier this week for cleaning.

Public health officials, in coordination with the school, were contacting the families of anyone who was in close contact with the infected student, Smith said. They will likely be told to quarantine for 14 days or until they can produce a negative test for the virus.

The Centers for Disease Control and Prevention defines close contact as “anyone who was within 6 feet of an infected person for at least 15 minutes.”

Coronavirus can be spread by a person before they begin showing symptoms. It’s believed the student was only at school Monday, Smith said.

KMS was one of 58 DODEA schools in Europe to welcome students back to the classroom on Monday. About 550 of the sixth, seventh and eighth graders who attend the school, or close to 80% of the student body, opted for in-class learning, while 140 chose virtual school, data provided early this month by DODEA-Europe show.

Six schools, in Bahrain, Spain and Turkey, began the year with distance learning due to health concerns.

Schools have the option of reverting to remote learning if local health conditions worsen or an outbreak at a school forces it to close for six days or more, DODEA officials have said.

The Kaiserslautern area is home to one of the largest overseas U.S. military communities, and KMS is one of 12 DODEA schools in the region.

German schools are also back in session, and at the Burg Gymnasium, a German high school in Kaiserslautern, 60 students were being tested for the virus after a student was confirmed to have it on Sunday, the Rheinpfalz newspaper reported.

As of Thursday, there were 70 active coronavirus cases in Kaiserslautern and the surrounding district, including nine among the American military community, district commissioner Ralf Lessmeister said in a Facebook post. The number of active cases in the area has more than doubled over the past 10 days, district figures show.