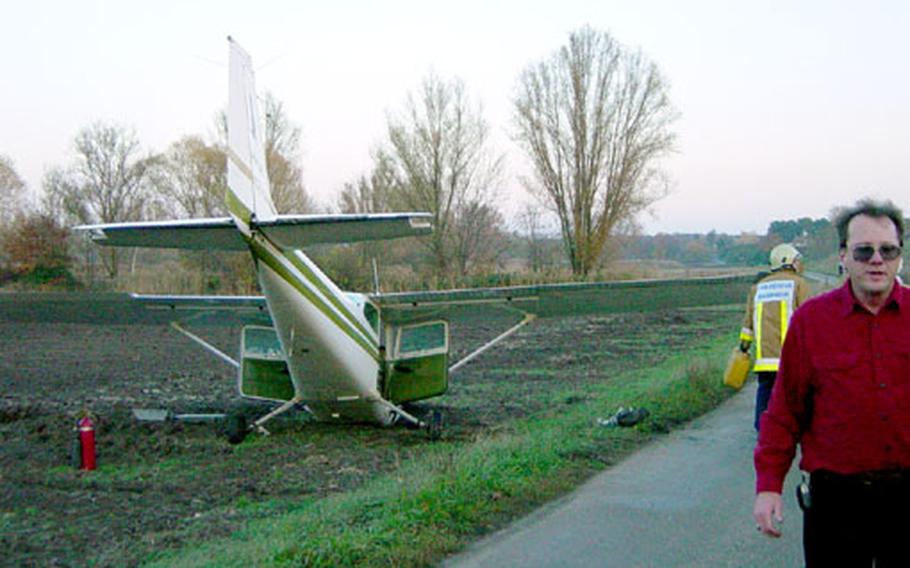 A plane rests in a field just outside the perimeter of Coleman Barracks in Mannheim, Germany. A student pilot misjudged a takeoff Monday that left the Cessna C-172 Skyhawk nose down in the field. The pilot had minor injuries. (Photo courtesy of Albert Hille, U.S. Fire Department, Coleman Barracks)

MANNHEIM, Germany &#8212; A flying mishap caused a student pilot to crash into the perimeter fence of Coleman Barracks.

The pilot, William Hamilton, 44, from Hanau, was attempting to take off during a training flight about 4:20 p.m. Monday when he encountered problems, U.S. base officials said.

Hamilton is part of the Aeroclub, a private organization at Coleman Barracks that teaches both Americans and Germans to fly.

He had been practicing &#8220;touch-and-go&#8221; techniques, where the plane takes off as soon as it lands, said Craig Walmsley, chief flight instructor for the Aeroclub.

Hamilton was flying solo at the time. He had about 40 hours behind the stick. The weather was cold, but flying conditions were good, base officials said.

The plane, a Cessna C-172 Skyhawk, taxied off the runway, hit a fence and ended up nose down in a field at the end of the runway near the base fence.

Both German and U.S. officials responded, said Sieg Heppner, a spokesman for the 293rd Base Support Battalion. Four trucks with eight personnel from the Coleman Fire Department assisted, he said.

&#8220;The student pilot fortunately remained unharmed except for some bruises,&#8221; Heppner said. &#8220;He was taken to a German hospital for evaluation and released.&#8221;

Walmsley said Hamilton was doing fine on Tuesday. The damage to the plane was estimated at $22,000, Heppner said. Both German and U.S. officials are looking into the cause of the crash.