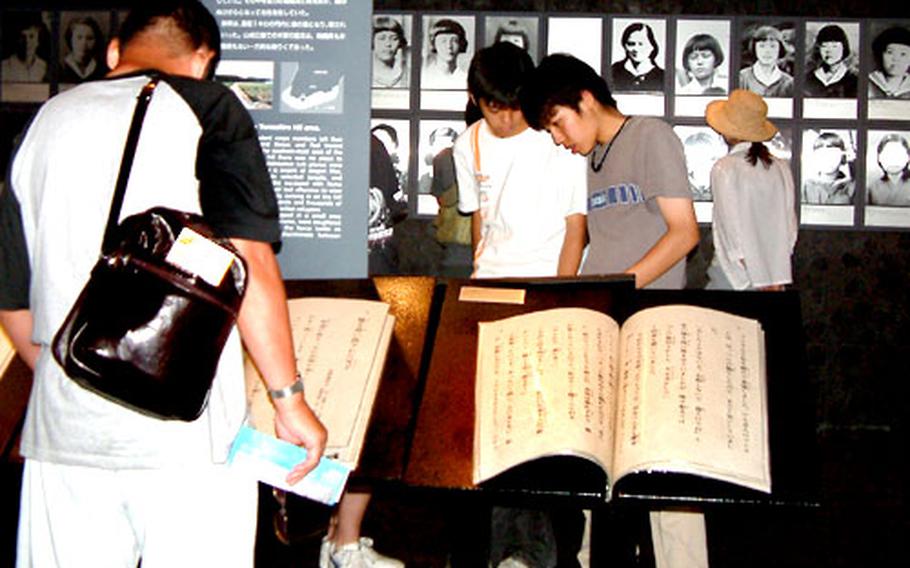 Visitors to the Himeyuri Peace Museum read the testimonies of girls pressed into service as nurses&#39; aides during the Battle of Okinawa. (David Allen / S&S)

Visitors to the Himeyuri Peace Museum read the testimonies of girls pressed into service as nurses&#39; aides during the Battle of Okinawa. (David Allen / S&S) 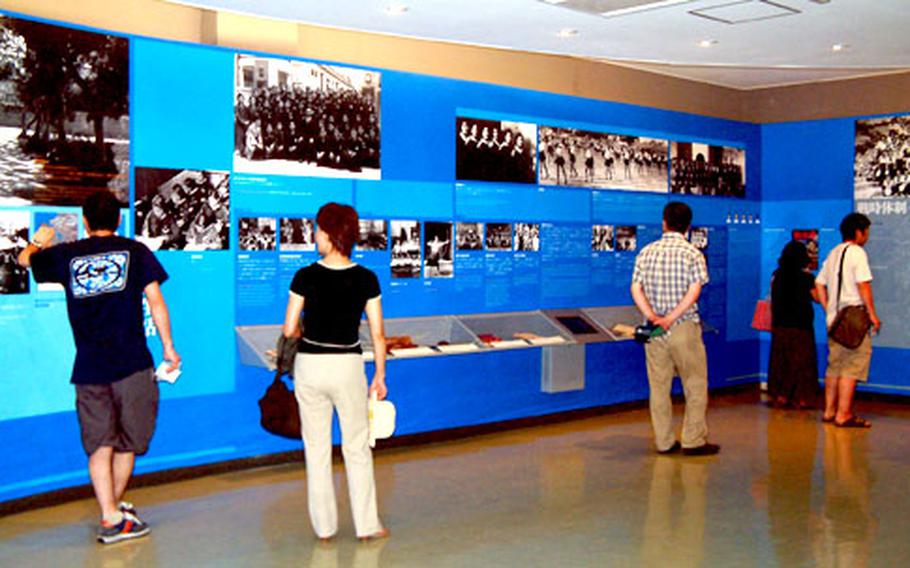 The Himeyuri Peace Museum was opened 15 years ago to "expose the brutality and insanity of war." Displays in JApanese and English detail the transformation of Okinawa high school girls into student nurses during the Battle of Okinawa. (David Allen / S&S) 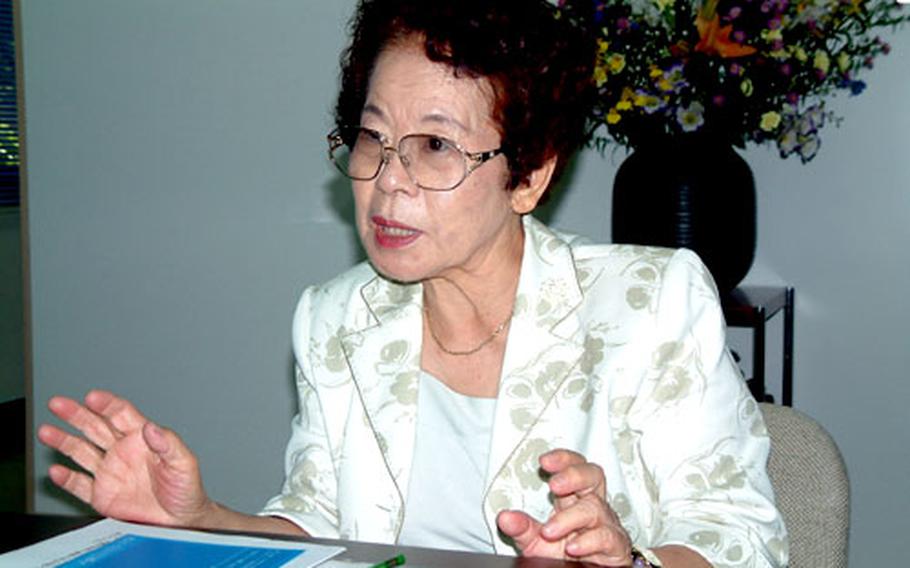 Tsuru Motomura, curator of the Himeyuri Peace Museum in Itoman, was one of 222 girls pressed into service as student nurses during the Battle of Okinawa. (David Allen / S&S) 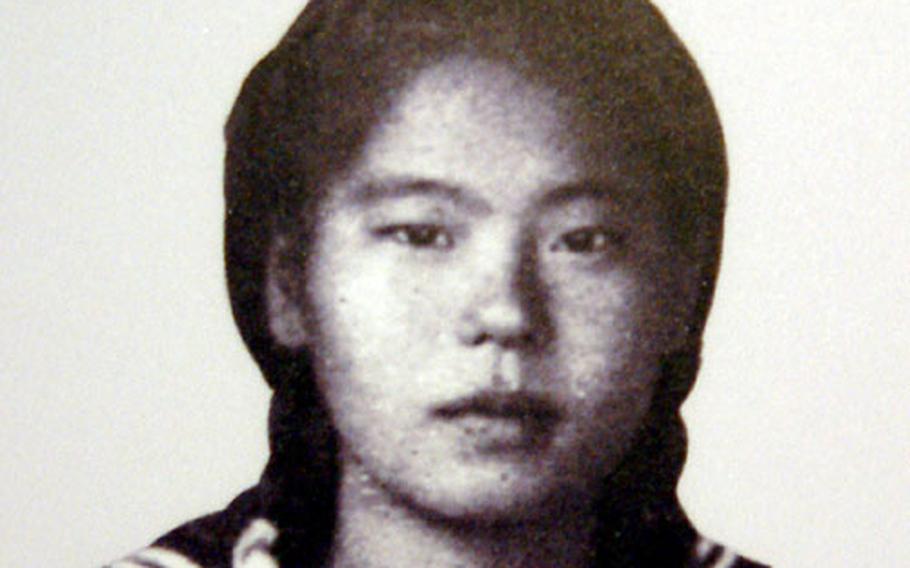 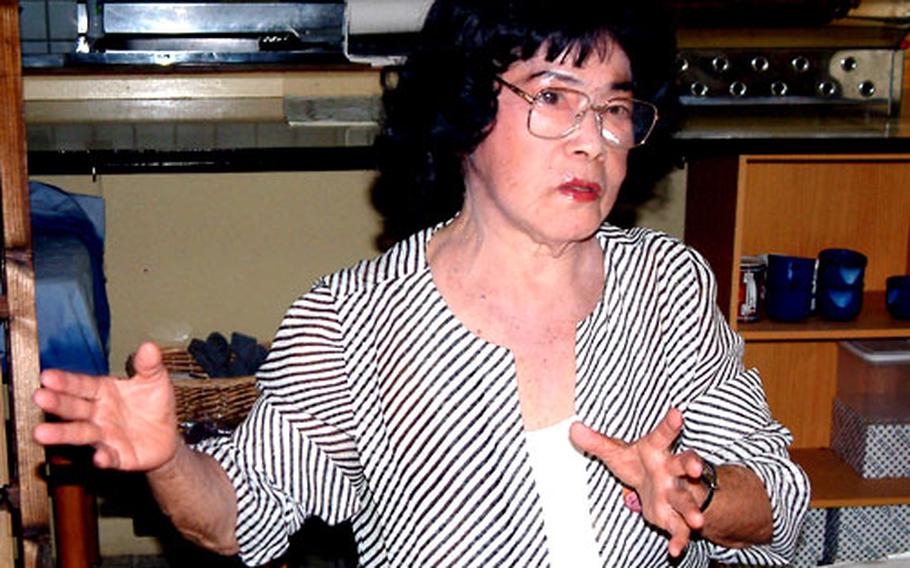 Kiyoko Miyagi of Henoko is a peace acitivist involved with the ongoing protest to prevent Japan from building a new airstrip in the waters of northeastern Okinawa to replace MCAS Futenma. She was one of 99 student nurses who survived the Battle of Okinawa 59 years ago. (David Allen / S&S)

ITOMAN, Okinawa &#8212; The Battle of Okinawa ended 59 years ago Wednesday, but time has not dimmed the memories of survivors of World War II&#8217;s bloodiest Pacific theater campaign.

Among Japanese and Americans attending the annual memorial at Peace Prayer Park will be survivors of a special group of Okinawans who continue to press their message to the world: &#8220;Don&#8217;t let this happen again.&#8221;

Names of all the dead are inscribed on black granite walls arranged like the &#8220;V&#8221; formations of birds taking flight to the sea. Among the names are those of 123 female students pressed into service as nursing aides during the battle, which has come to be called the &#8220;Typhoon of Steel.&#8221;

Many were classmates of Tsuru Motomura, 79, curator of the Himeyuri Peace Museum in Itoman, near Peace Prayer Park. The student nurses were known as the Himeyuri or &#8220;Princess Lily&#8221; Girls. Daughters of Okinawa&#8217;s privileged class, they attended one of two exclusive Naha high schools. Most hoped to become teachers.

Motomura was one of 222 girls from her school pressed into service as Japanese army nurses. More than 100 of them perished.

&#8220;It is my duty and the duty of those who survived the war to tell people of the reality of war, the brutality and stupidity of war,&#8221; Motomura said during an interview at the museum. &#8220;It is our duty to speak for our friends who fell in the war and to repose their souls.&#8221;

Motomura supervised the museum&#8217;s recent renovation. &#8220;The original museum, built 15 years ago by the surviving students, was designed to convey a message of war and peace through displays and the testimony of the survivors, the eyewitnesses,&#8221; Motomura said. &#8220;However, all of us are already over 75 years old and we cannot come to the museum forever to tell our stories.

In March 1945, the girls and 18 teachers were conscripted as nurses&#8217; aides and assigned to the Japanese Army Field Hospital in Haebaru village. The hospital was in a series of caves dug into a grassy ridge. The girls had several years of military-type training; hours of indoctrination had replaced subjects such as English; physical education shifted from learning traditional dances to marching in step.

But nothing, survivors said, prepared them for what was to follow. &#8220;News of their mobilization to the Army Field Hospital had led the students to believe that they would conduct their medical duties in safe wards flying Red Cross flags,&#8221; the display states. &#8220;The reality was that they were thrown into the hellish war front full of oncoming shells and bullets.&#8221;

In all, 123 girls and 15 teachers died during the battle, most after being released from duty and abandoned to wander the battlefield. Another 87, who had been allowed to go home, also perished.

Before World War II, 21 junior high and high schools operated on Okinawa. All their students eventually were sent to the front lines. Girls became student nurses; boys became messengers and laborers in the &#8220;Iron and Blood Corps.&#8221;

&#8220;As the units that had retreated to the south were decimated, some students were given improvised bombs and were made to perform suicide attacks on U.S. tanks,&#8221; a display at the museum states.

Motomura was among students sent to the Haebaru field hospital &#8212; about 40 crowded caves filled with the wounded and dying.

&#8220;It was dark and humid and unsanitary,&#8221; she said. &#8220;There was no adequate treatment of the wounded; their condition was indescribably bad. All the wounded soldiers were infested with maggots, especially their mouths and ears, and it was the job of the student nurses to remove the maggots from their wounds.&#8221;

But at least the caves were safer than the battlefield. Until June 18, just 20 students had been killed. But on that date the Japanese army released them from their duties. &#8220;We were told to leave our caves and find a safe place on our own,&#8221; Motomura said. &#8220;There was no way to find safe shelter, so we hid behind what was left of the trees and rocks.&#8221;

During the final five days of the battle, 100 girls were killed.

Motomura and a classmate decided to try to seek safety in northern Okinawa by walking along the eastern shoreline. U.S. soldiers captured them near Urasoe.

She was taken to a refugee camp, where she cared for orphans. She wasn&#8217;t reunited with what was left of her family until the next January. Four brothers and a sister had died; her mother and sole surviving sister had malaria.

&#8220;After I was captured and assured of safety, I felt no relief or happiness,&#8221; Motomura said, closing her eyes and bowing her head. &#8220;I lost so many of my friends. They all died and I was not sure if it was right for me to continue to stay alive.

About 900,000 people visit the museum annually. Motomura said the message is simple: &#8220;Life is more precious than anything else. We hope the museum helps people to think about peace and what each one can do to establish and maintain peace throughout the world.&#8221;

A fellow student, Kiyoko Miyagi, now 78, has dedicated her life to the Okinawa peace movement. The retired teacher lives in Henoko, where Japan plans to build an airport to replace Futenma Marine Corps Air Station.She has allowed peace activists to use her property near the Henoko fishing port.

Daily since the beginning of April they have prevented surveyors from conducting an environmental survey of the waters where the new base is to be built.

&#8220;I travel throughout Japan to tell our stories,&#8221; she said, sitting in her small karaoke bar in the village. &#8220;Countless precious lives were lost during the war. War should never be allowed to happen. I will do whatever it takes to stop anything that might lead to war &#8212; including this new military base. I am resolved not to let our children and grandchildren experience what I had gone through.&#8221;

Miyagi also was assigned to the Haebaru hospital caves, where she saw soldiers have their limbs amputated without adequate anesthesia.

One of her duties was to bury the amputated limbs.

The worst time was when the unit was deactivated, she said: &#8220;An army doctor distributed hand grenades and cyanide to all of us.&#8221; But even though she&#8217;d been taught U.S. soldiers would rape and kill her, she said, she could not bring herself to commit suicide.

She was captured after spending a few days among the rocks on the Kiyan Peninsula, going out only at night to forage for food.

&#8220;We were hiding between rocks on a cliff when the enemy found us and started pouring gasoline from above both sides of the cliff to set it afire,&#8221; Miyagi said. &#8220;With no other choice but be burned, we climbed the cliff and saw American soldiers pointing their guns at us. It was the first time in my life that I saw blue eyes.&#8221;

It is those experiences the Himeyuri Girls share with anyone who will listen. There are now only 85 survivors. They speak, they say, for the ones who can&#8217;t.