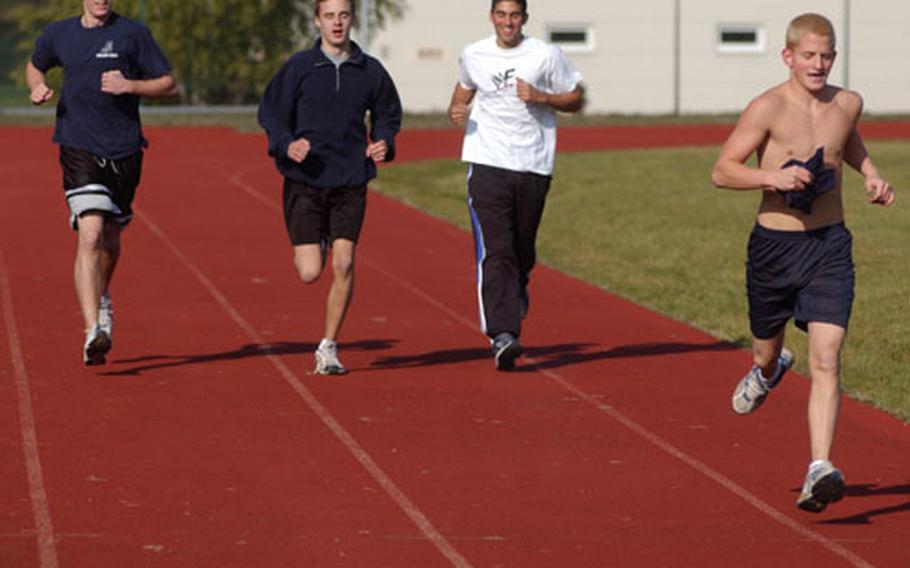 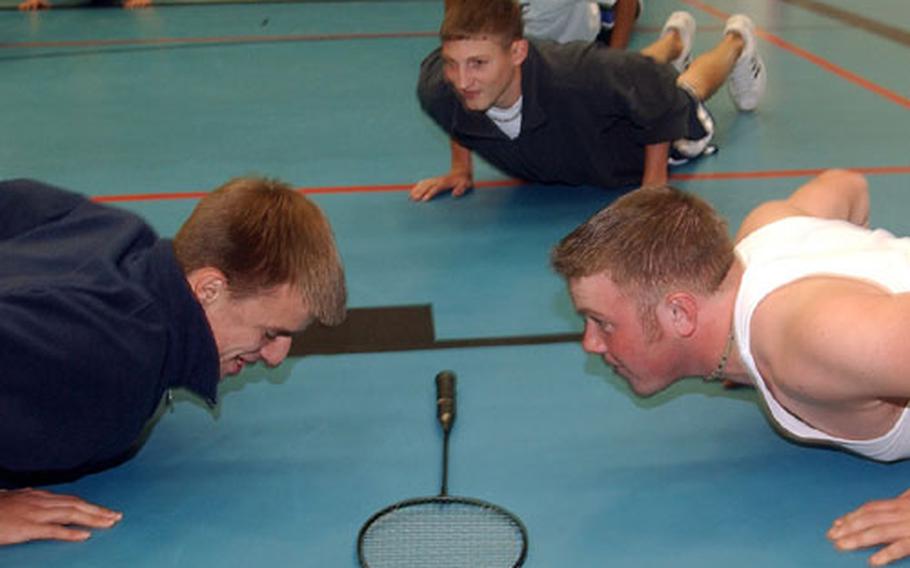 Students at Ramstein High School in Germany work out on exercise bikes and other fitness machines during a recent gym class. (Raymond T. Conway / S&S)

But during a recent test of his incoming freshmen&#8217;s physical fitness, Lemmon was surprised to find that few made the grade.

&#8220;We were shocked to see the results,&#8221; Lemmon said in a letter to the editor of Stars and Stripes. In addition, Lemmon tested kids&#8217; body-fat composition using skin calipers to pinch skin on the triceps and the calf. Fifty-six percent of the kids met the body-fat standards &#8212; between 10 percent and 20 percent for boys and 15 percent and 27 percent for girls.

The National Institutes of Health calls obesity in children an epidemic in the United States. The number of youngsters who are overweight has doubled in the past two to three decades, the NIH recently reported.

Health experts blame the trend on lack of physical activity, inside and outside of school, and a diet rich in fast foods and sweets.

In the Department of Defense Dependents Schools, children mirror their stateside peers in most ways, spokesman Frank O&#8217;Gara said.

However, DODDS-Europe does not track overall physical fitness statistics for its pupils, said Karen Seadore, who is in charge of the system&#8217;s physical education program. All of its 150 PE teachers, however, are trained to implement the 2-year-old Fitness Gram test that Lemmon used to test his students.

Russo recently gave his third- to fifth-grade pupils a test recommended by the President&#8217;s Council on Physical Fitness, which uses age-based standards.

None of the children in Russo&#8217;s classes passed the test, which includes agility tests, pull-ups, sit-ups and a run.

&#8220;We can&#8217;t pass it. Why? Because children are a lot different today than they used to be,&#8221; Russo said. However, he said, he uses much of his weekly 55-minute class period to help children prepare to retake the test.

In a sense, DODDS&#8217; physical education standards, especially in high school, remain higher than those used in many stateside schools. A number of schools are phasing out PE classes altogether to save money and hang onto ever-important academic programs.

The national Centers for Disease Control and Prevention recently reported that high school students&#8217; enrollment in PE classes remained unchanged during the first half of the 1990s. But daily attendance in PE dropped from roughly 42 percent to 25 percent since then.

At the same time, more children are having trouble controlling their weight.

In 1980, just 5 percent of school-age children were severely overweight. Twenty years later, the number jumped to 15 percent, the CDC reported.

To help combat that trend, DODDS facilities worldwide are adding high school PE classes. Starting with the 2004/2005 school year, DODDS high-school students will have to take an extra semester &#8212; or half-year &#8212; of PE instruction. Students now are required to take one year of PE in high school, said Barbara Weigand, instructional systems specialist, health education and physical instruction for the Department of Defense Education Activity.

The decision to increase the physical education requirement was &#8220;strongly influenced by the tendency today, particularly among adolescents, to become less physically active,&#8221; Weigand said. The result is a greater incidence of childhood obesity and risk of diseases such as diabetes, she said.

How much is enough?

Some DODDS teachers say requirements should be increased at all grade levels.

&#8220;My philosophy is that every school and every child should have 60 minutes of PE every day from kindergarten through high school,&#8221; Lemmon said.

The CDC recommends nearly as much: Each day a person should exercise a minimum of 30 minutes. Health benefits increase with additional exercise, the center said.

The Army and the European Parent-Teacher Association agree that more exercise is warranted in schools. Recently, the PTA voted to require more PE. And the Army has lobbied that every pupil should have physical education opportunities every day.

Some DODDS pupils are already committed to more.

On one recent crisp autumn day, Brandon Rech, a 17-year-old Ramstein High School senior who is on the wrestling and cross-country teams, ran a couple of miles outside while his PE classmates were doing laps inside the gym.

As of now, DODDS requires some form of physical education in kindergarten through eighth grade, but the amount varies based on the number of pupils and teachers at each school, Seadore said.

She estimated that all schools offer at least one class period of PE each week. And she said DODDS hopes to give youngsters other times to stay active through its after-school sports clubs and intramural sports teams.

&#8220;Although we may not be offering PE every day, we are offering other opportunities for physical education,&#8221; she said.

But increasing the requirement at all levels of DODDS would cost too much, O&#8217;Gara said. He said a recent study found that providing physical education every day for kindergarten-to-12th-grade pupils would cost $20 million just for additional teachers.

Providing the facilities would cost even more.

Some DODDS schools are already stretched for space. Ramstein High School teacher Kent Grosshuesch recently had to set up his badminton nets end-to-end in the school&#8217;s only gymnasium in order to provide enough floor space for the 60 students in his PE class to play.

Ultimately, teachers and health experts alike say the responsibility for good physical fitness standards rests with parents. Children who are allowed to follow sedentary pursuits such as video games and nonstop TV-watching will tend to be less physically fit. Those whose families stress physical fitness will be more likely to make exercise a habit later in life.

In addition, children in families who stress healthy eating habits will be less likely to become overweight than those in families who eat out at fast-food restaurants and regularly gorge on snack foods.

Jodie Bowers, a member of Ramstein High School&#8217;s School Advisory Committee, said her children never shied away from exercise, though she&#8217;s aware that some youngsters do.

&#8220;I&#8217;ve had three children in the DODDS system and I couldn&#8217;t be any prouder of the way they have participated in the physical education program,&#8221; Bowers said. Her sons were always outside in the woods and her daughter takes horseback riding lessons.

Other pupils said they chose to take PE because it was required. Most DODDS students get their one year of PE over with their freshman year, teachers said.

Lemmon suggests that the lessons from physical education classes be remembered even after the credits have been earned.

While DODDS continues to emphasize various academic programs, such as its current Math Matters campaign, children should not neglect their bodies while sharpening their minds, Lemmon said.