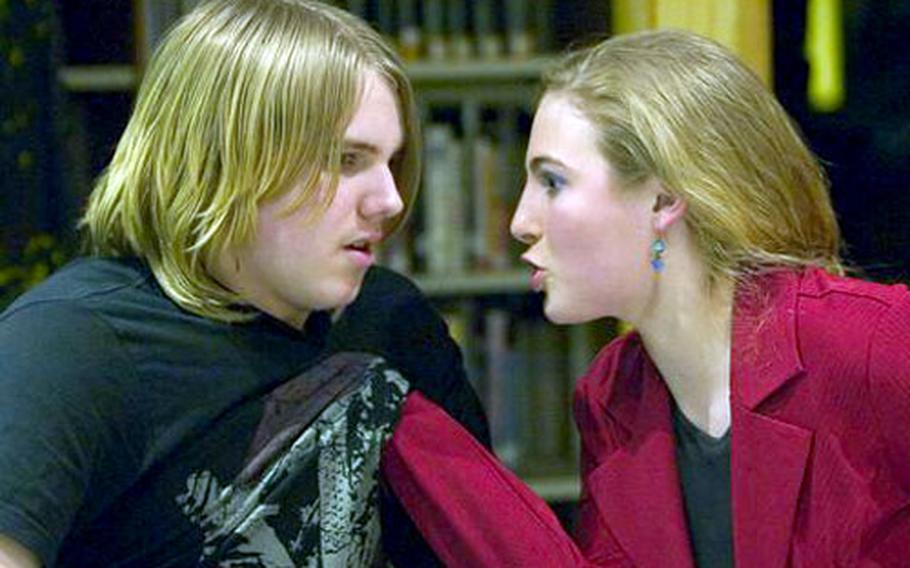 Lakenheath High School senior Miranda Fluhrer gets the attention of Tristan Gooding during the skit “Sure Thing,” part of the school’s “Loadsa Laffs” production. Fluhrer has won a trip to an acting competition this summer in Nebraska. (Courtesy of Michael Mitchell)

RAF LAKENHEATH &#8212; Miranda Fluhrer has played Cinderella, performed as a chorus girl in &#8220;Guys and Dolls&#8221; and even portrayed Robert Fulton, inventor of the steam engine.

Now the Lakenheath High School senior is preparing for her biggest challenge to date.

The grant is considered one of the most prestigious drama competitions in the United States and the four winners receive a weeklong trip to the Doug Finney Festival in Lincoln, Neb. There the amateur actors and actresses will compete for scholarships to American universities.

Chris Hunt, director of marketing for the International Thespian Society, said 26 high school students from across the country applied for the four coveted spots.

Fluhrer, of New Mexico, has already been offered four scholarships, but is keeping her options open as she enters the coveted competition.

Fluhrer said she loves characters that have the most development. A role as a 200-year-old ghost was her favorite. &#8220;I loved every minute of it,&#8221; she said.

Ultimately, Fluhrer hopes to make a name for herself on the silver screen or work in children&#8217;s theater. She has long participated in the traveling acting troupe, Missoula Children&#8217;s Theatre.

&#8220;My dream would be to be an actress in Hollywood and, after that, work with young children in acting. I loved being part of that when I was younger,&#8221; she said.

Fluhrer&#8217;s most recent gig was with the Lakenheath High School Drama Club in its production of &#8220;Loadsa Laffs.&#8221; The collections of short, one-act skits provided her the opportunity to play a variety of roles.

She acted alongside Tristan Gooding in her role as a reluctant would-be girlfriend in &#8220;Sure Thing.&#8221; The funny skit is something Fluhrer knows can be tough to pull off.

She knows she&#8217;s going to have to make it work this summer in Nebraska if she wants to make a major leap in her nascent acting career. Regardless of her performance, she said acting will help her in whatever she pursues in life.