Strykers train with allies to ready for Afghanistan 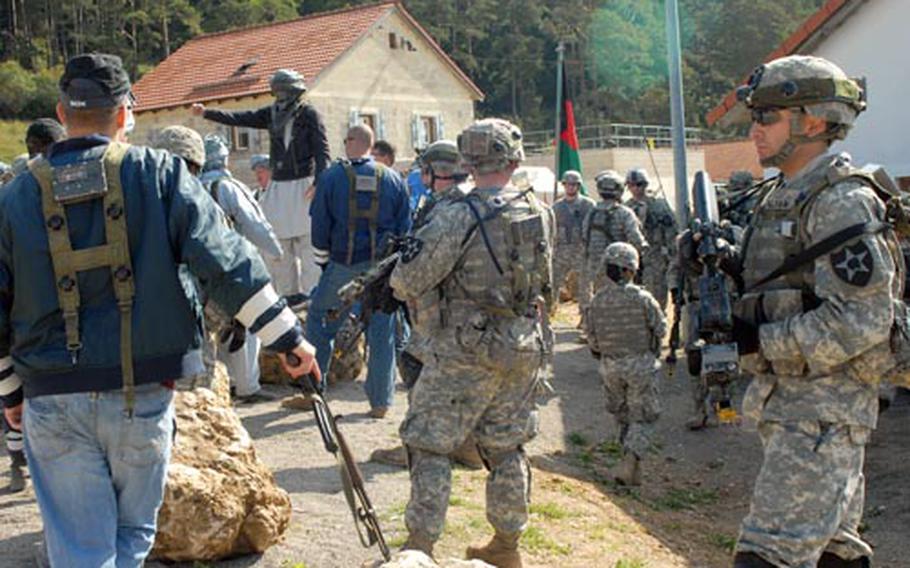 Members of 3rd Stryker Brigade, 2nd Infantry Division deal with a group of role players pretending to be angry townfolk during training at Hohenfels, Germany, on Friday. (Seth Robson / S&S)

The site served as a surrogate for Jalalabad, Afghanistan, during training for soldiers from the 3rd Stryker Brigade, 2nd Infantry Division.

The Indianhead troops, out of Fort Lewis, Wash., are at Hohenfels taking part in an exercise alongside soldiers from Australia, New Zealand, Canada and Britain this month.

One of the Strykers, Company A, 5th Battalion, 20th Infantry Regiment 1st Sgt. Matthew Goodine, said the police station attack was designed to test the ability of a quick reaction force (QRF) to respond to a mass casualty event.

"The QRF had to come in, conduct triage on the wounded, pull security and request outside assistance &#8212; a helicopter medevac &#8212; to move out eight casualties," he said.

Training with an Afghan scenario, with coalition partners in Germany, is an interesting experience for the Strykers, who got back from Iraq in September last year and are waiting to find out what their next assignment will be, he said.

"Any time we can work with the nations we are going to work with downrange is a bonus. Our [allies&#8217;] armies tend to be similar to us in structure, but there are a lot of small things that, if you are not familiar with them, can create problems," he said.

The U.S. Army says it is unlikely that the Strykers will head to Afghanistan, but Goodine said they would have not a problem operating there if the call came.

The country&#8217;s rugged terrain might limit the eight-wheeled armored Strykers to some extent, he said, but added: "We are first and foremost an infantry organization that happens to use Strykers."

Many of the soldiers in Company A are Iraq veterans but only two have served in Afghanistan, Goodine said.

"I have had 27 months in Iraq and nothing in Afghanistan. There is a different approach to the Afghan culture than there is to the Iraq culture &#8230; so there is a steep learning curve with the cultural differences we have to pick up on," he said.

A Company A team leader, Sgt. Christopher Bowles, 29, of Salem, Ore., said he&#8217;s enjoying the interactions with the foreign troops.

Another Stryker, Spc. Kyle Cotarelo, 24, of Dallas, said he&#8217;d been to Iraq twice but never to Afghanistan.

"After two tours in Iraq it is nice to train for different scenario just in case we go," he said.