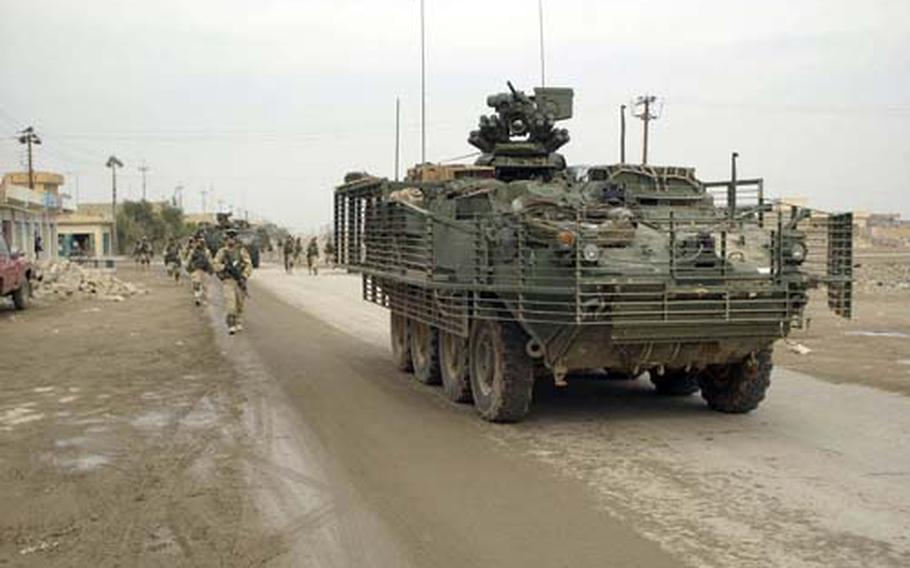 GRAFENW&#214;HR, Germany &#8212; The U.S. will send eight-wheeled Stryker armored personnel carriers and troops from the 2nd Stryker Cavalry Regiment to Romania and Bulgaria this summer to train alongside forces from those countries.

Lt. Col. Daniel Herrigstad, public affairs officer for Joint Task Force East, said elements of 2nd Cav&#8217;s 4th Squadron will head to Romania while soldiers from the regiment&#8217;s 2nd Squadron will deploy to Bulgaria to train during summer and fall.

The 2nd Cav returned last year from a 15-month deployment to Iraq but with the focus of U.S. military intervention moving to the battle against the Taliban, there is speculation that the Strykers&#8217; next combat deployment could be Afghanistan.

"The cultural experience during the exercise is very important as we are able to establish relationships and create a shared understanding between us, the Romanians and the Bulgarians," he said.

The 2nd Cav expects the exercise to benefit both U.S. and foreign troops, he said.

"We will build strong ties with the host nation&#8217;s leaders, soldiers and citizens &#8230; as well as &#8230; share and exchange ideas to include tactics, techniques and procedures and common doctrine," Pendell said. "This training will help create a base line for our troopers during future exercises and training."

In addition to the Strykers, elements of the Tennessee National Guard&#8217;s 1st Battalion, 181st Field Artillery Regiment and Navy Seabees will participate in the Eastern Europe training, Herrigstad said.

The training will start Aug. 2 with about 380 U.S. soldiers along with support staff in Romania and Bulgaria, he said.

"The numbers also include ... Romania and Bulgaria forces training side by side with our National Guardsmen," he said.

The training will occur in three 21-day cycles through the end of October, he said.

During the training, Romanian and Bulgarian forces will be integrated into U.S. forces at squad, platoon and company level, he said.

Meanwhile, the Navy Seabees will continue Humanitarian Civic Assistance missions they have conducted in Romania for the past 18 months, he said.

"These include refurbishing public kindergarten, elementary schools and medical clinics," he said.

The Seabees&#8217; activities will expand to include areas around the Novo Selo training area in Bulgaria this summer, he said.

During breaks from training, U.S. personnel will take field trips to experience the local culture and go sightseeing, Herrigstad said.