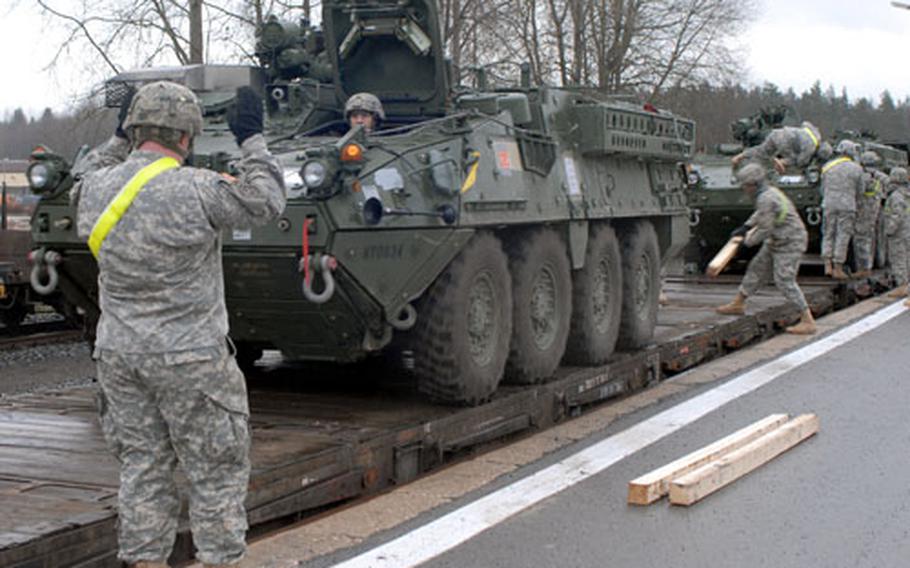 2nd Stryker Cavalry Regiment soldiers unloaded dozens of Stryker armored personnel carriers at the Vilseck railhead on Saturday. The vehicles were back from a 15-month deployment to Iraq.\ (Seth Robson / S&S)

VILSECK, Germany &#8212; They survived 15 months of combat, roadside bomb attacks, small arms fire and countless patrols on the dangerous streets of Baghdad and the dusty farm tracks of Diyala Province.

On Saturday, dozens of Stryker armored personnel carriers arrived home to Vilseck, 19 months after they left for the desert. Recently returned soldiers from the 2nd Stryker Cavalry Regiment, who relied on the eight-wheeled behemoths to keep them safe in the war zone, were at the railhead to meet them.

One of them, Stryker driver Spc. Thomas Mayberry, 27, of Cabot, Ark., said the vehicles looked naked without the protective cages they wore downrange to guard against rocket propelled grenades.

Mayberry said the most exciting mission he performed in a Stryker in Iraq involved ramming his vehicle through a gate before two squads of troopers raided the building.

"I floored it and knocked the gate right off its hinges," he recalled.

Another soldier at the railhead, Sgt. Joseph Young, 35, of Lakewood, Calif., is a forward artillery observer by trade but ended up driving a Stryker in Iraq. It was his first experience in the Stryker after past deployments in Bradley fighting vehicles and Humvees, he said.

"The Stryker was a nice upgrade. I felt safe in it most of the time," he said. "The only thing that scared us were the [explosively formed projectiles] because they made Swiss cheese of everything."

Insurgents didn&#8217;t know how to combat the Strykers, Young said.

"If you shoot at us, a remote-controlled 50-cal (machine gun) is going to point at you," he said. "If not, you will have a squad (of troopers) in your face."

Young said his Stryker had two close calls with roadside bombs, but both bombs were mistimed and neither damaged the vehicle. Small-arms fire bounced off the Stryker&#8217;s armor during combat, he said.

"When we took fire you could hear the little pings. I felt really secure inside," he said.

The Strykers were also comfortable with air-conditioners, heaters and a sound system that played heavy metal band Metallica, Young said.

Seeing the Strykers back in Vilseck was like welcoming home fellow soldiers, he said.

"[A Stryker] is a part of you. You can rely on it. It will always get you home and if not you have your buddies&#8217; Strykers who will help you get back," he said.

The Strykers returned earlier than expected and will wait in motor pools until the bulk of the regiment returns from block leave and begins training for its next mission, Mayberry said.