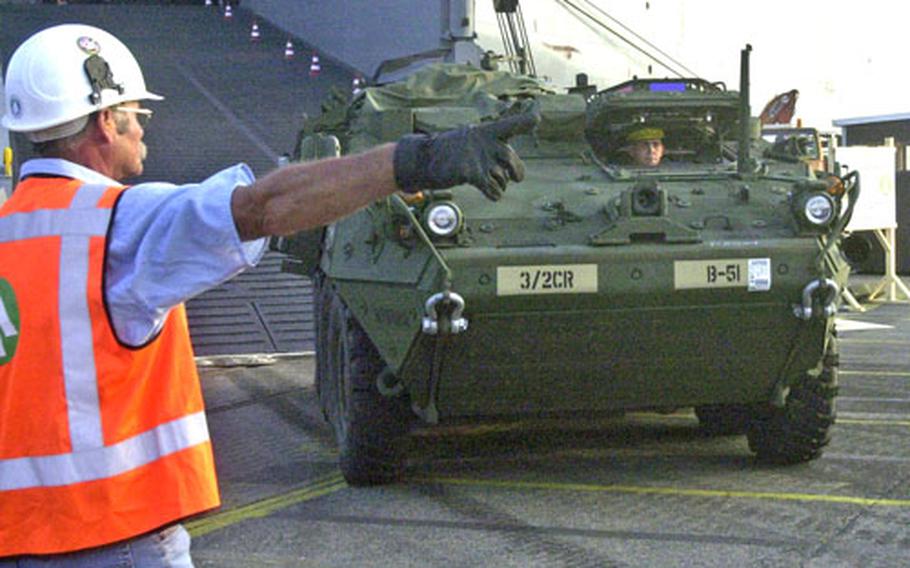 A 2nd Cavalry Regiment soldier drives a Stryker vehicle off the U.S. Military Sealift Command Ship USNS Mendonca early Monday morning in Bremerhaven, Germany. The ship unloaded the first of 129 Strykers, which now will be transported to the 2nd Cavalry in Vilseck. (Steve Mraz / S&S)

A 2nd Cavalry Regiment soldier drives a Stryker vehicle off the U.S. Military Sealift Command Ship USNS Mendonca early Monday morning in Bremerhaven, Germany. The ship unloaded the first of 129 Strykers, which now will be transported to the 2nd Cavalry in Vilseck. (Steve Mraz / S&S) 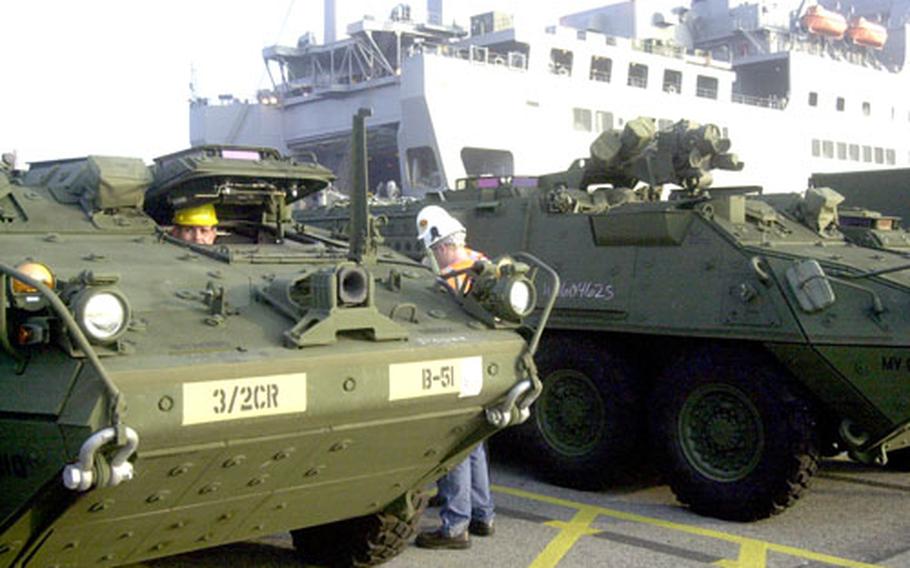 Pfc. Ben Zibutis with the 1st Battalion, 2nd (Stryker) Cavalry Regiment, out of Vilseck, Germany, brings a Stryker vehicle to a stop Monday morning at the port in Bremerhaven, Germany. (Steve Mraz / S&S)

The first of more than 300 Stryker armored vehicles of the 2nd (Stryker) Cavalry Regiment arrived Monday in northern Germany at 7 a.m., having survived the 21-day ocean trip from Tacoma, Wash.

Once unloaded from two U.S. Navy Military Sealift Command-controlled ships, the Strykers will be transported by rail to the regiment&#8217;s new headquarters in Vilseck. The first of the eight-wheeled vehicles are scheduled to arrive in southwest Germany by Thursday.

&#8220;The Stryker brigade is a big deal,&#8221; said Lt. Col. John Hanson, commander of the 838th Transportation Battalion, which is involved in the port mission. &#8220;It&#8217;s been one of the most important developments in the U.S. Army over the past couple of years. These are the first vehicles that have arrived in Germany that will be permanently stationed in Germany.&#8221;

With its wide-set headlights, angled chin and slanted forehead, the green Stryker could be said to resemble a bullfrog. A heavily armored bullfrog.

The vehicle, brought into Army service in 2002, represents a focal point in the Army&#8217;s transformation.

Its primary purpose is to safely move infantry around the battlefield. The Stryker has better range and can transport more troops than a Bradley fighting vehicle. The 19-ton Stryker, designed to maneuver easily in close and urban terrain, can be deployed via a C-130.

Also, the Stryker can withstand more punishment than a Humvee, Ferrara said.

This summer has been marked by change for the roughly 3,500 soldiers of the 2nd (Stryker) Cavalry Regiment. The first of the soldiers and their families moved from Fort Lewis, Wash., to Vilseck, earlier this summer. Now that their primary vehicles have arrived, the soldiers can get around to training in their Strykers.

Soldiers with the 21st Theater Support Command out of Kaiserslautern are taking part in the Bremerhaven mission by getting the Strykers prepared for rail movement. Maj. Marc Hamilton, executive officer of the 200th Materiel Management Center, said it&#8217;s great to be a part of the historic mission.