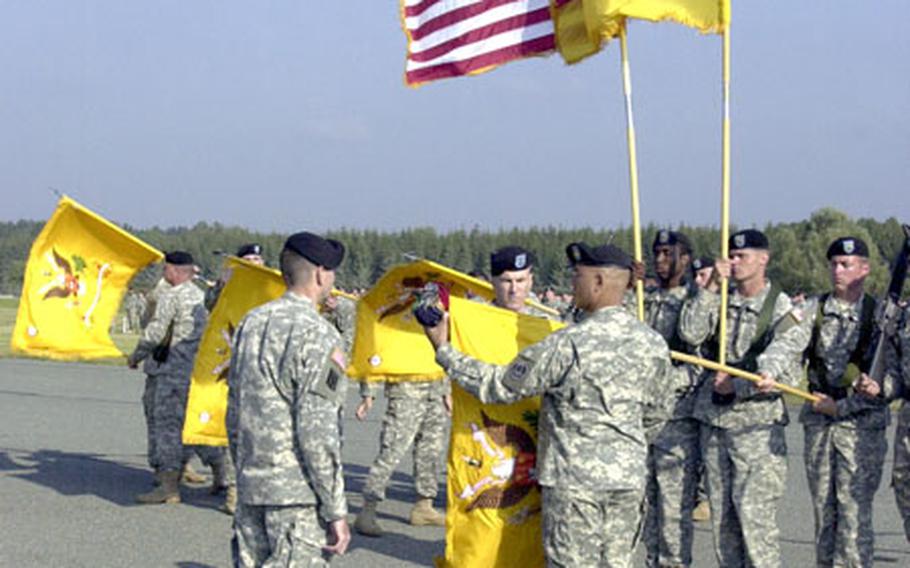 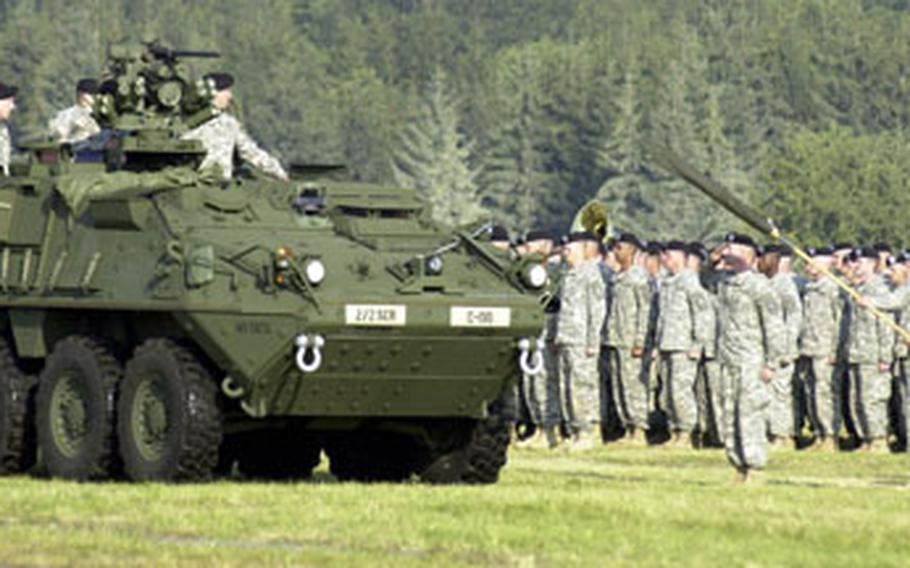 Second Cavalry Regiment leaders review their troops from the roof of a Stryker at Vilseck Army Airfield, Germany, on Friday during a welcome home ceremony for the unit. (Seth Robson / S&S)

GRAFENW&#214;HR, Germany &#8212; The 2nd Cavalry (Stryker) Regiment could deploy out of Europe once its soldiers are trained, U.S. Army Europe and 7th Army commander Gen. David D. McKiernan said Friday at a welcome home ceremony for the unit.

The 2nd Cav has moved thousands of soldiers and family members along with 300 Stryker armored personnel carriers and 1,000 other pieces of heavy equipment from Fort Lewis, Wash., to Germany in the past few months.

McKiernan said 65 percent of the unit&#8217;s soldiers are new to the regiment.

Basing the Strykers at Vilseck positions them with the U.S. Army&#8217;s largest training facility outside of the U.S. &#8212; the Joint Multinational Training Command, he said.

&#8220;The result will be expeditionary training and operational readiness that can be sustained here or exported throughout the European Command&#8217;s area of operations or further,&#8221; he said.

RisCassi said his unit was in Iraq a little over a year ago before returning to Fort Lewis.

&#8220;We reflagged and moved to Germany. This ceremony signifies for us a new beginning and an end to that transition period. Very shortly we will be moving out into the training areas,&#8221; he said.

Stryker soldiers were invited to party with locals in the Vilseck marketplace after the ceremony, an official announced.

A 2nd Cavalry Regiment veteran, Merritt Powell, who served as a master sergeant with the unit in Bayreuth and Nuremberg from 1954 to 1956, played bagpipes at the ceremony in memory of 22 soldiers from the unit killed in action during the recent Iraq deployment.

When Powell served, the regiment was equipped with 18 World War II-vintage M7 vehicles &#8212; 105 mm artillery pieces mounted on the bodies of tanks, he recalled.

Germany has changed a lot since then, he said.