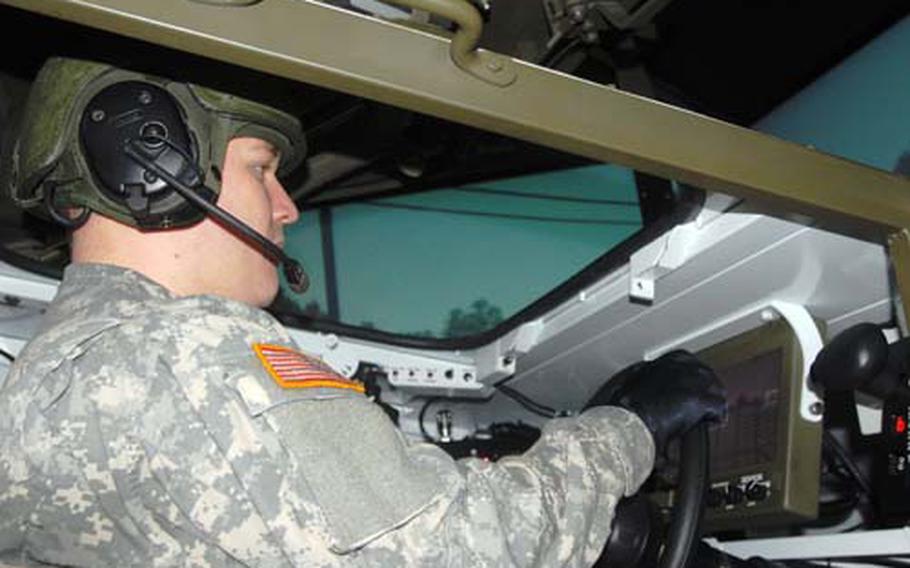 Spc. Joshua Ballenger, 24, of The Colony, Texas, drives a Stryker simulator at Vilseck, Germany, on Wednesday. The simulator allows soldiers to practice driving a vehicle before actually getting behind the wheel and heading out on the road. (Seth Robson / S&S)

Jason French, a center technician, showed off the million-dollar simulator during an open house for Stryker soldiers on Wednesday.

Soldiers took turns in the cab &#8212; designed to replicate the inside of a Stryker armored personnel carrier &#8212; driving the vehicle through rough, mountainous terrain and urban environments depicted on three massive video screens.

Electric motors under the cab rocked it back and forth, sometimes violently, as the drivers negotiated obstacles or, occasionally, crashed the vehicle.

French said the simulator&#8217;s Stryker cab can be swapped with several cabs that recently arrived, which are designed to replicate the inside of other vehicles used by the Army in Iraq or Afghanistan, including various models of Mine Resistant Ambush Protected vehicles.

The system is designed to get soldiers used to driving the vehicles before they take a real one out on the road, French said.

The simulator can run more than 100 scenarios that range from driving through obstacle courses to patrolling in urban environments, dealing with traffic and reacting to roadside bombs and rocket-propelled grenade attacks, he said.

"In this environment, you just want to get the driver familiar with all the sounds and sights and all the failures which can happen inside the vehicle," he said.

For example, drivers must report things such as brake failure and react to fire in the cab or engine, he said.

A computer records any mistakes, such as failing to fasten a seat belt, and compiles a score for each driver. The simulation is recorded along with a video of the driver in action, French said.

One Joint Multinational Training Command (JMTC) soldier who drove the simulator on Wednesday, Spc. Joshua Ballenger, 24, of The Colony, Texas, described the experience as realistic.

"When the system&#8217;s going, it kind of gives you a feel for what it&#8217;s like," he said, adding that it was easy to roll the vehicle during simulations.

A 2nd Cav officer at the TSC open house, Capt. John Stepniewski, 27, of Seminole, Fla. , said he plans to use the simulator to train his soldiers.

Stepniewski, who deployed with the regiment to Iraq from 2007 to 2008 and serves with the Regimental Support Squadron, said his men fell in on MRAPs and trained to drive them downrange.

He said many young soldiers could benefit from time in the simulator before they get behind the wheel of a Stryker.

"I would really like to see that. I would add it as a requirement for individual instruction right before they get on the road," he said.