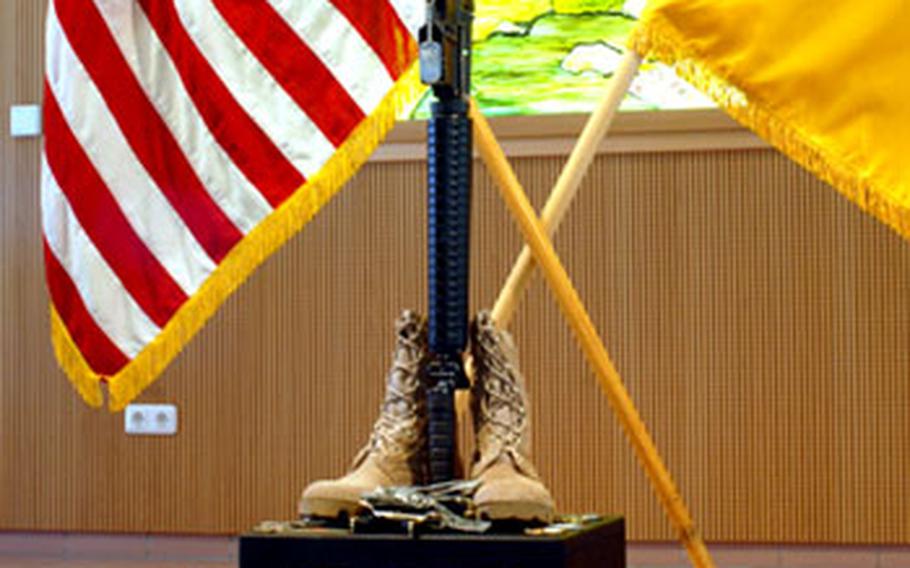 VILSECK, Germany &#8212; For almost 10 months, Cpl. Justin Ray Mixon climbed into the forward compartment in a Stryker armored personnel carrier each day and drove his comrades through Baghdad&#8217;s dangerous streets.

On Sunday, during a patrol on the outskirts of Sadr City, a roadside bomb blasted through his vehicle, killing the 22-year-old soldier and injuring another.

"He did his job without fear. He sat in the face of an extremist enemy day in and day out. Every day he climbed into the driver&#8217;s compartment of (Stryker) C 3-3, Barnett said.

"It is a restricted space. You can&#8217;t see anyone. His friends riding just feet behind him in the troop compartment relied on him to get them from point A to point B," said Barnett, who was in Vilseck on mid-tour leave on the day of the ceremony.

In Iraq, Mixon, of Bogalusa, La., had a reputation as someone with a positive outlook.

"He never had a bad day. He always had a smile on his face and he was always positive. I and everyone who served with Cpl. Mixon will be a better person for having shared life with him," he said.

Soldiers&#8217; families rarely get a glimpse of the people they become when they walk out of their homes and deploy to places like Iraq, Barnett said.

When he was downrange Mixon talked lovingly about his wife, Tia Marie, and son, Tony Ray. Platoon-mates also found out a lot about Mixon&#8217;s home state of Louisiana, Barnett said.

It was fitting that Mixon was honored on the anniversary of D-Day, he said.

"Cpl. Mixon is also part of a great generation of American soldiers."

Mixon enlisted in the Army in May 2005 and trained as an infantryman.

"It takes a special kind of courage to serve our nation in uniform. It takes even more courage to enlist knowing the Army is committed in combat in Afghanistan and Iraq," 2nd Cav Rear Detachment commander Lt. Col. Thomas Rickard said at the ceremony.

Rickard also talked about the courage of Army spouses while Tia Mixon and other soldiers&#8217; wives sat weeping quietly at the front of a packed chapel.

"It takes a big heart and true grit to marry a soldier and support that soldier during deployment. Thank you, Tia, for your courage and support for your husband," he said.

Americans are the victors, not the victims in the fight against an enemy that kills children and wants only suffering instead of suffrage, he said.

"Because of Cpl. Mixon and others like him, Iraqi women cast ballots in an election, a dictator was overthrown, and thousands of Iraqis will soon vote in free provincial elections," Rickard said.