Stryker regiment set to partner with German troops for training 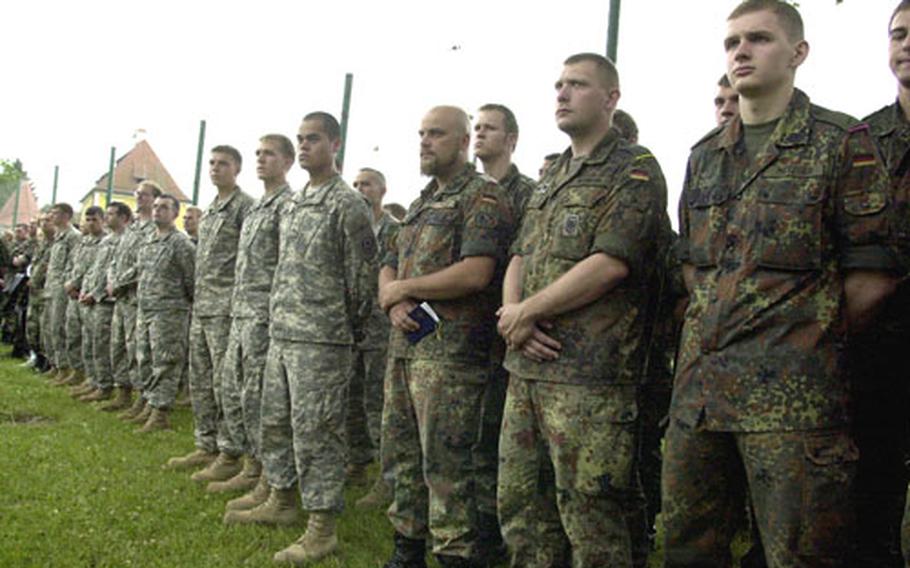 Members of the 2nd Cavalry (Stryker) Regiment and 12th Panzer Brigade stop to pray during a march Thursday through the countryside around Amberg, Germany. (Seth Robson / S&S)

GRAFENW&#214;HR, Germany &#8212; The newly arrived 2nd Cavalry (Stryker) Regiment will partner with the German army&#8217;s 12th Panzer (Tank) Brigade &#8212; a union that will see the units train alongside each other, share training areas and build personal and professional relationships.

A total of 25 2nd Cav soldiers joined several hundred 12th Panzer troops for a march through the countryside around Amberg on Thursday that included Christian prayer and hymn. The bulk of the 6,000-man German unit is deployed to Kosovo and due to return home in the fall, said Bernd-Dieter Koslowski, 12th Panzer Brigade rear detachment commander.

&#8220;The relationship between the sister units will involve regular meetings to discuss joint events as well as sending German soldiers to participate in all the American training events. The goal is to grow the partnership both professionally and on a personal level,&#8221; he said.

One of the 2nd Cav troops mingling with the Germans during the march &#8212; 1st Lt. Lance Turner, 24, of Springfield, Ore. &#8212; said he never imagined he would march beside German soldiers.

&#8220;In school we learned about the world wars, but that&#8217;s history. We know nowadays we are building relationships with the Germans. We are looking forward to training with them. We will learn from them as much as they learn from us,&#8221; he said.

One of the 12th Panzer soldiers involved in the march &#8212; Master Sgt. Johannes Plossner, 41 &#8212; said his unit was changing its structure to become more like the Stryker brigade.

The Panzer brigade is equipped with Leopard tanks (equivalent to American Abrams tanks) and Marders (equivalent to Bradley fighting vehicles). The unit also has wheeled armored personnel carriers such as the Luchs and may soon field the newer Fenneck wheeled combat vehicles, Plossner said.

The 2nd Cav chaplain, Capt. Jeff Botsford, 50, of Cheboygan, Mich., told the Germans he was impressed with their tanks.

After the march, the German and American soldiers enjoyed sausage and beer at the Mariahilfberg Fest. A speaker told the troops that the festival, dedicated to the Virgin Mary, was started in 1634 by locals praying that they would not catch the plague.