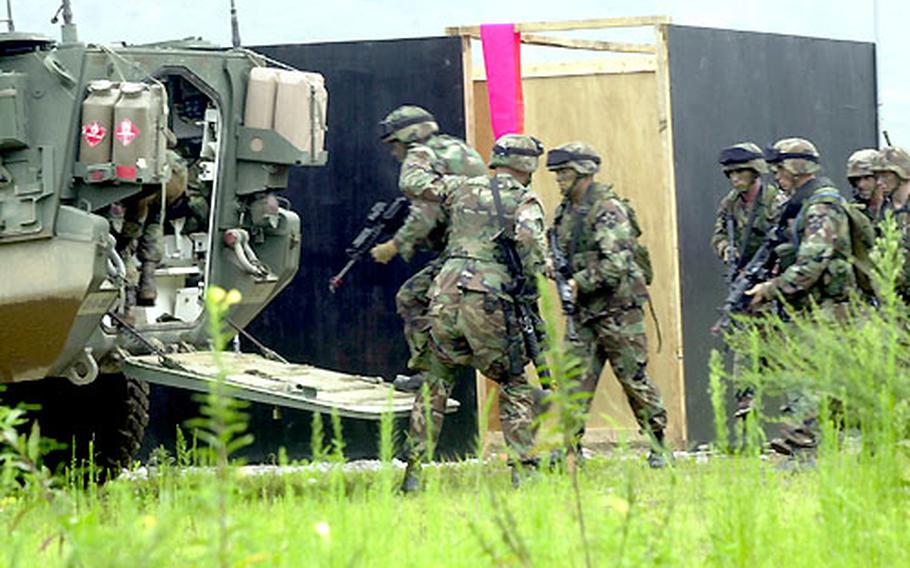 Infantrymen climb back inside a Stryker armored personnel carrier after assaulting a target during a live-fire exercise Monday at Rodriguez Range. (Jeremy Kirk / S&S)

Infantrymen climb back inside a Stryker armored personnel carrier after assaulting a target during a live-fire exercise Monday at Rodriguez Range. (Jeremy Kirk / S&S) 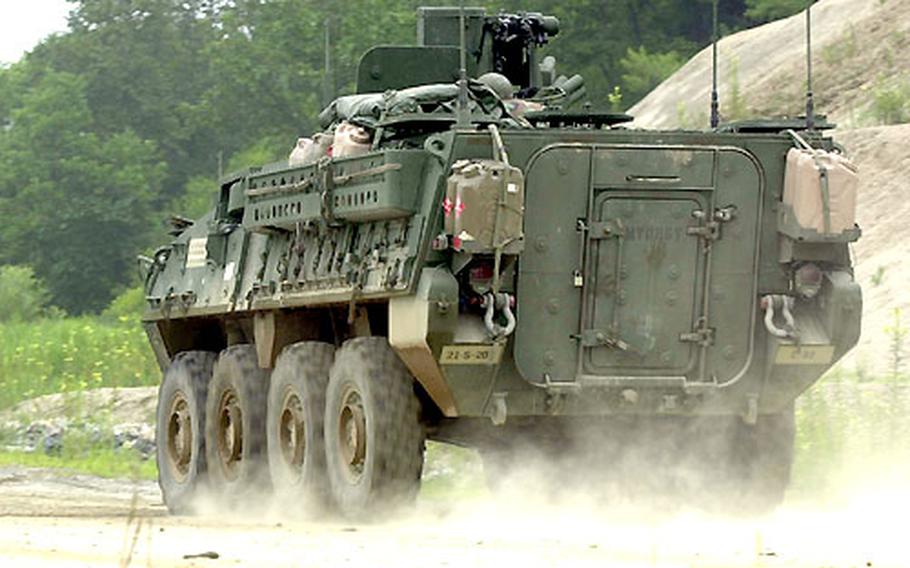 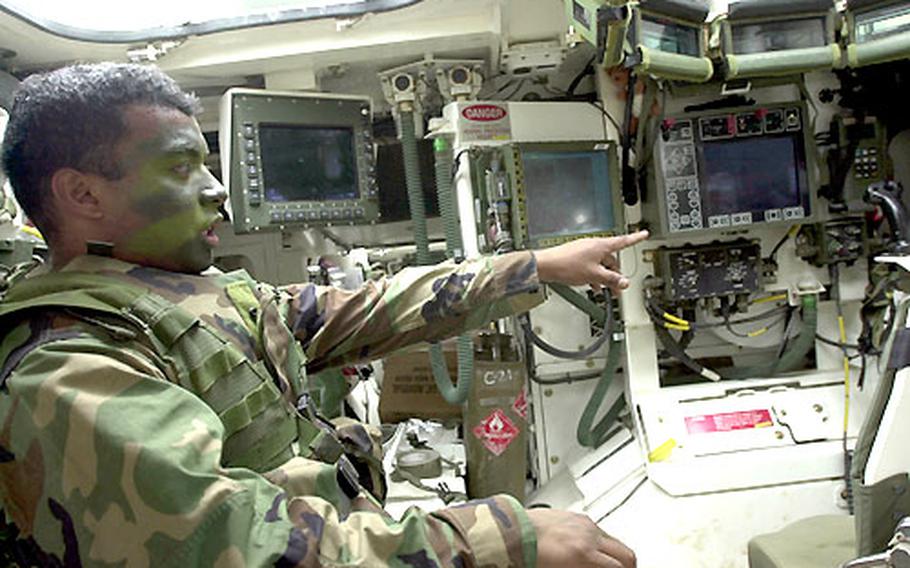 POCHON, South Korea &#8212; The Army&#8217;s new armored personnel carrier kicked up dust and pounded out blanks during a live-fire demonstration Monday, getting rave reviews from soldiers while showing its speed.

The eight-wheeled vehicles &#8212; the Army&#8217;s step toward a lighter, more mobile force &#8212; spun around the dusty roads of Rodriguez Range with ease, pulling up to berms and unloading infantry troops while exhibiting how infantry troops won&#8217;t have to work as hard getting to the fight.

The Strykers arrived Friday at Osan Air Base. They were carried by C-17s and gave the unit a chance to practice offloading the vehicles, said Capt. Eric Beaty, commander of C company, 5th Battalion, 25th Infantry Regiment of the 2nd Infantry Division.

A platoon of Strykers simulated an attack on an enemy command site. It started with the boom of mortars followed by Strykers roaring up to berms, dumping infantrymen who then threw simulated grenades at small buildings.

In October 1999, the Army announced it needed an interim force to correct a problem: its heavy forces &#8212; consisting of M1A1 Abrams tanks and Bradley Fighting Vehicles &#8212; are lethal and survivable, but not very mobile. Its light forces were mobile but didn&#8217;t provide as much protection for soldiers.

Operations in Iraq, Afghanistan and Kosovo showed a need for a lethal, protective ground force. The Stryker can survive air bursts and the equivalent of .50 caliber fire, and with an armor package is resistant to rocket-propelled grenades that have been increasingly used against U.S. forces in Iraq.

It also represents the Army&#8217;s new fighting concept, said Brig. Gen. Jack Gardner, deputy commanding general for the U.S. Army Training and Doctrine Command. The Stryker is designed to see the enemy rather than making immediate contact and drawing the enemy out to find their positions, he said.

&#8220;It&#8217;s not designed to go head to head against a large heavy force,&#8221; Gardner said. &#8220;If you know where your guys are, and you know where the enemy is, you can kind of shape the fight and make contact where you want.&#8221; One of the Stryker Brigade Combat Teams is scheduled to go to Iraq next October, Gardner said.

The Stryker holds 11 infantry soldiers, including a commander and a driver. It can be equipped with TOW anti-tank missiles, and infantrymen can carry hand-held Javelin anti-tank weapons.

Its eight wheels can run flat, and a central inflation system can modify the amount of air in the tires depending on the terrain: street, off road, ice and emergency. Pushed by a 350-horsepower Caterpillar diesel engine, it&#8217;s significantly quieter than an M1A1 tank or Bradley, allowing it to get closer without detection.

It&#8217;s also got air conditioning, but that uses more gas, so it&#8217;s rarely used, Siangeldeb said. The Stryker can detect and protect against chemical weapons.

One drawback is the .50 caliber machine gun and MK-19 grenade launcher must be reloaded from the outside, Siangeldeb said. But the Strykers would circle and protect one that is reloading, he said.

Sgt. Alastair Duncan is a Stryker commander. He has been in mechanized infantry units before and came to Fort Lewis, Wash., just as the Stryker was being fielded.

Duncan said he feels comfortable operating the Force XXI Battle Command Brigade and Below computer screen, which shows friendly and enemy vehicles on a map, part of what the Army calls situation awareness.

Staff Sgt. Daniel Allemani said the while idea is for the Stryker to get close to fight and let the infantry do the destroying. For him, it means fewer rucks through the woods.